The distribution of asperity heights on the bearing surface consisting of long narrow ridges and valleys in engineering practice. A rough surface is a random system and the fractal geometry is introduced to characterize the random and multiscale topographies. Mandelbrot [29] initially developed the fractal theory by researching the coastal geomorphology in 1967. He found that the most machined surfaces can be constructed using Weierstrass-Mandelbrot (W-M) function with randomness, multiscale nature, self-similarity, and self-affine property. Unlike the traditional characterization parameters of surface roughness, fractal roughness parameters are independent of scan lengths and provide all the surface topography information of rough profiles. The W-M function that explicitly expressed the homogeneous rough surface in self-acting gas-lubricated journal bearings is given by where hr(x,y) is the height of rough surface, x and y are the measure distances in the vertical and horizontal position, respectively. L is the sampling length of the profile of surface. Df is the fractal dimension, varying from 2 to 3 in three-dimensional surface topography. G is the scaling constant that relates to the roughness profile. γ is the scaling parameter (γ > 1), which determines the spectral density, γ is equal to 1.5 for a Gaussian and isotropic surface. M is the number of overlapped ridges on the surface, m and n are the frequency index, nmax = int[log(L/Ls)/logγ], φm,n is the random phase, Ls is the cut-off length that depends on cut-off wavelength of resolution in measuring machines.
The values of asperity heights can be changed by the fractal dimension Df, comparisons of the distributions of asperity heights for different Df are illustrated in Figure 1. It is seen that the heights of rough surfaces increase as the fractal dimension decreases.
In the three-dimensional isotropic roughness type, the schematic presentation of rough gas microbearing is plotted in Figure 2.

In the current analysis, rarefied gas flow between the surfaces of bearing and journal is treated as isothermal, laminar flow with uniform viscosity. and elastic deformation of bearing surface is not considered. The Boltzmann slip correction is used to model the gas rarefaction effect at the gas-solid interface for arbitrary Knudsen numbers. The physical configuration of micro gas bearing with rough surface is shown in Figure 3. The modified Reynolds equation incorporating gas rarefaction and surface roughness effects in non-dimensional form appears as where P = p/pa, H = h/cb, φ = x/R, λ = z/R are the dimensionless gas film pressure, the dimensionless gas film thickness, and the coordinates in the circumferential and axial direction, pa is the ambient pressure, cb is the radius clearance, R is the radius of journal, p is the local gas pressure, h is the clearance spacing of ultra-thin gas film, ε is the eccentricity ratio and ε = e/cb, e is the eccentricity. Λ = 6μωR2/(pacb2) is the gas bearing number, μ is the viscosity coefficient, ω is the rotating angular velocity of journal, T is the dimensionless time.
For the slip correction factors in rarefied gas flows under ultra-low spacing, the dimensionless Poiseuille flow rate between rotor and bearing surfaces with the gas thickness h is given as [30]
The Poiseuille flow rate ratio Q appears as where the inverse Knudsen number , the three adjustable coefficients a = 0.01807, b = 1.35355 and c = −1.17468. The Boltzmann Poiseuille flow rate ratio [31] Q is expressed as
Here the lubricant film thickness h is the sum of nominal smooth film thickness h0 and random roughness hr measured from the nominal smooth height.
As in the steady state, the transient term ∂(PH)/∂T of Equation (2) can be ignored, the static dimensionless modified Reynolds equation can be gained as
In order to obtain the aerodynamic performance of gas microbearings, the modified Reynolds equation for homogeneous surface roughness and gas rarefaction should be solved numerically. Equation (2), governing the gas pressure distribution of the bearing, is a nonlinear two-dimensional partial differential equation (PDE). It is difficult to get its analytical solution. So, the partial derivative method [32,33], with a relaxation iteration algorithm, is employed to ensure a reasonable and efficient solution. By introducing the mathematical transformation PH = S, (PH)2 = S2 = Π, Equation (2) can be converted to the ellipse-type partial differential equation in the following form:
The pressure boundary conditions for the Reynolds equation are: where B is the bearing width.
The non-dimensional hydrodynamic gas film forces are obtained by integrating the film pressure acting on the microbearing along the both horizontal and vertical directions.
The attitude angle θ of the gas-lubricated journal microbearing is calculated by
The total non-dimensional load-carrying capacity is written as
The non-dimensional skin friction coefficient on the journal surface can be computed by
Suppose that the journal center whirls around its static equilibrium position with a small amplitude periodic motion under the perturbation frequency ratio Ω, the linear perturbation method is adopted for calculating the dynamic stiffness and damping coefficients. The steady-state position is indicated as (ε0,θ0), and its dynamic disturbance about (ε0,θ0) are denoted as E and Θ. The positions of eccentricity ratio ε and attitude angle θ of journal at a random position are represented by the static and dynamic components as follows: where E0 and Θ0 are the small perturbation amplitude of journal eccentricity ratio and attitude angle in the complex field. The dimensionless perturbation frequency Ω, which is defined as the ratio of journal disturbance frequency ν to rotating angular velocity ω of journal, .
Thus, the non-dimensional gas-film pressure and gas-film thickness of the gas microbearing can be expressed as where , P0 is the static gas-film pressure and H0 is the static gas-film thickness. Qgd, Hgd are the dynamic gas film pressure and gas film thickness, respectively. and are the perturbation magnitudes in terms of complex numbers for dynamic gas film pressure and gas film thickness.
Substituting Equation (15) into Equation (2), the generalized dynamic lubrication equation for molecular model and surface roughness can be derived as:
As mentioned in Reference [34], some variables are defined by
After differentiating and in Equation (16) with respect to E0 and Θ0, and combining with some mathematical transformation, the resulting dynamic PDE equations are obtained for rough surface microbearings concerning the variables PE, Pθ, HE, and Hθ.
According to the coordinate system at the bearing midplane as illustrated in Figure 3, by simultaneously solving the nonlinear Equations (18)–(21) using the partial derivative method with iteration procedure, the dynamic stiffness coefficients Kij and dynamic damping coefficients Dij of gas journal microbearing for fractal rough surface can be calculated by the following formula:
The dynamic coefficients in the Cartesian coordinate system are given by the transformation matrix A.
It was confirmed that the dynamic characteristics of the gas journal bearing can greatly affect the critical speed, unbalance response, and instability threshold of a hydrodynamic gas-lubricated bearing-rotor system after long-term research and practice. The comprehensive analysis of dynamic coefficients is important in the design of gas microbearings in MEMS applications, the key findings presented in the next section will reveal some insights into the ultra-thin gas film lubrication problems.

On the basis of fractal geometry theory and the Boltzmann slip correction factor, the combined effects of gas rarefaction and surface roughness on the static and dynamic characteristics of ultra-thin film gas lubrication in journal microbearings are investigated in detail. The pressure distribution, load carrying capacity, friction coefficient and attitude angles of bearing, dynamic stiffness and damping properties are analyzed concerning the fractal dimension and bearing geometric parameters in this section, the primary design parameters shown in Figure 3 are R = 1mm, B = 200 µm, c = 1 µm, pa = 1.033 × 105 N/m2, and the aspect ratio is B/D = 0.1.

To verify the correctness of the developed theoretical model and program code employed in this paper, the non-dimensional pressure profile for the middle cross-section along the sliding direction obtained by the current solution is compared with Zhang et al. in Reference [22]. As indicated in Figure 4, the simulation results are in close agreement with the numerical predictions reported by Zhang et al. for ε = 0.7, B/D = 0.075, c = 12 μm, ω = 5 × 105 rpm. It can also be seen that the pressure randomly fluctuates when the effect of surface roughness is considered.
The influence of bearing number Λ, eccentricity ratio ε, and surface roughness on pressure distributions P is shown in Figure 5. An important observation exhibited by Figure 4a,b is that the maximum gas film pressure becomes larger as Λ increases for fixed fractal parameters G and D. This phenomenon can be explained by the enhanced aerodynamic effect, which indicates that higher angular velocity of the journal dilutes the pressure diffusion. In Figure 4a,c, increasing the eccentricity ratio ε leads to the higher pressure distribution and magnitude of pressure fluctuations decrease. In comparison with the smooth surface case, the roughness effect increases the pressure profile for the rough surface at the same bearing number and eccentricity ratio, and the random surface roughness makes the pressure distribution across the entire lubricating film unpredictable. The contour plots show more clearly the detail and variation of pressure over the rough bearing surfaces. At greater bearing number Λ the influence of surface roughness decreases and the contour lines approach that of the smooth case, the fluctuations of the pressure contour plots are significant with the increase of fractal roughness in gas bearing.

The coupled effects of gas rarefaction and surface roughness on the static and dynamic characteristics of gas microbearings are studied using fractal geometry theory and Boltzmann model for Poiseuille flow. Based on the results mentioned in previous section, the following conclusions have been drawn:
1. Surface roughness and gaseous rarefaction effects are of great importance to the lubrication performance of gas journal microbearings. At small asperity height distributions, the gas film pressure distributions increase for higher bearing numbers and eccentricity ratios, consequently leads to an increment of load-carrying capacity.
2. The attitude angle increases with the larger fractal dimensions compared with smooth surface, whereas the skin friction coefficient yields a reversed trend because of the long narrow ridges and furrows impose a series of constrictions on gas lubricant in the sliding direction.
3. The principal stiffness coefficients increase with the increase in dimensionless perturbation frequency and all the stiffness coefficients become larger and larger at higher eccentricity ratios and bearing numbers. The damping coefficients increase as the eccentricity ratio increases and the principal damping can be first magnified and then diminished with increasing bearing number.
4. The stiffness coefficients increase as the fractal dimension decreases at the same perturbation frequency and bearing number, while the stiffness coefficients first increase and then decrease for increasing eccentricity ratio. The damping coefficients increase with decreasing fractal dimension except for the Dyx at large bearing number values.
5. It seems that the fractal rough surface does not merely increases the steady-state and dynamic performance of gas microbearings. When the degree of rarefaction effect is more pronounced, the static load capacity and dynamic coefficients decrease quickly for larger values of distribution of asperity heights. 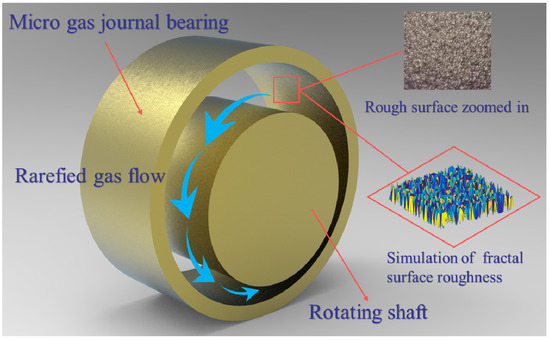 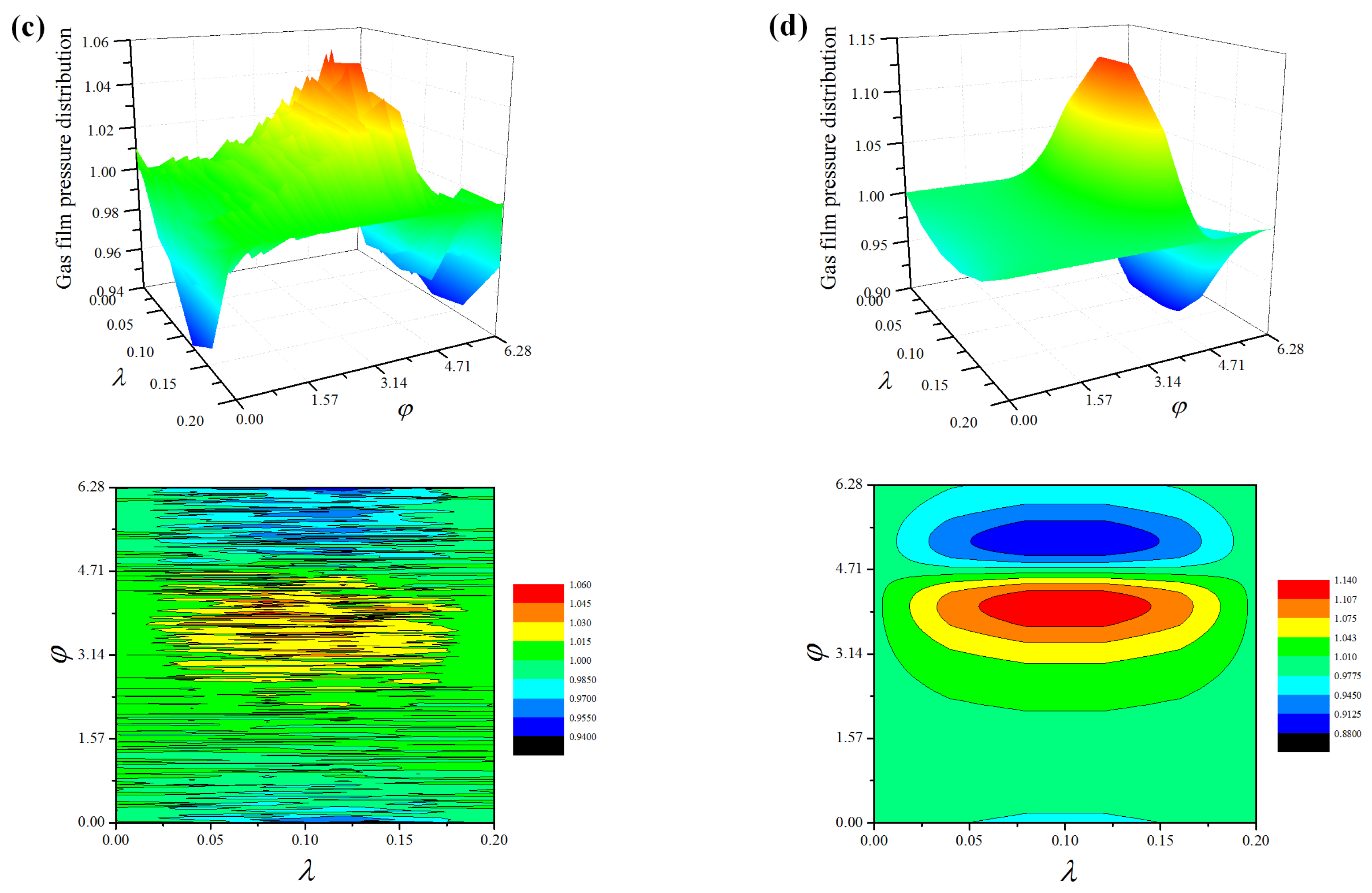 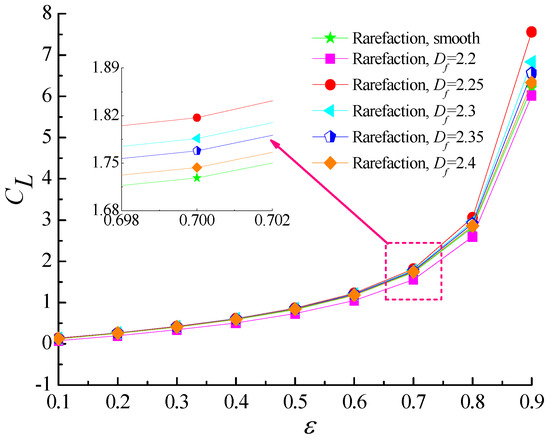 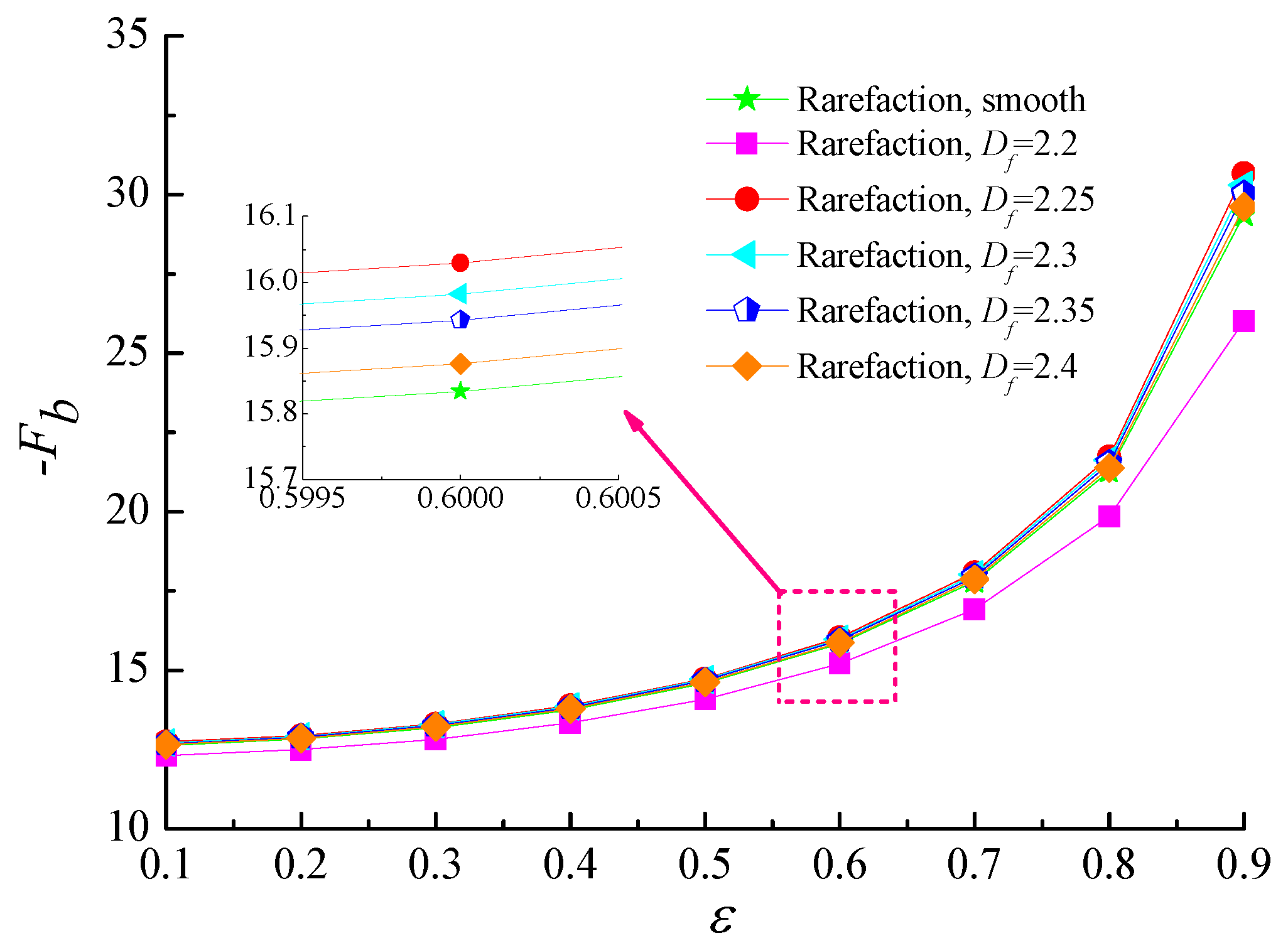 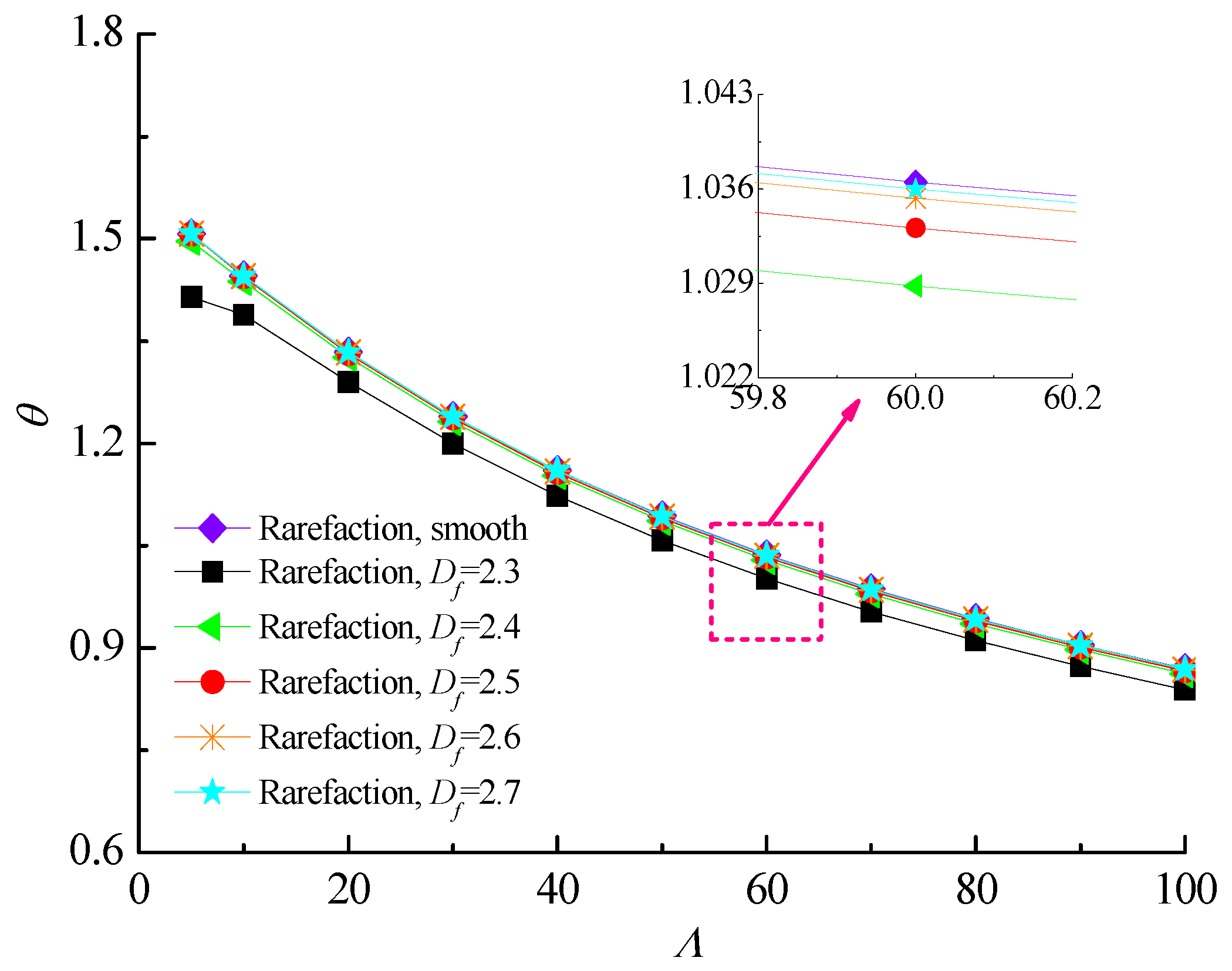 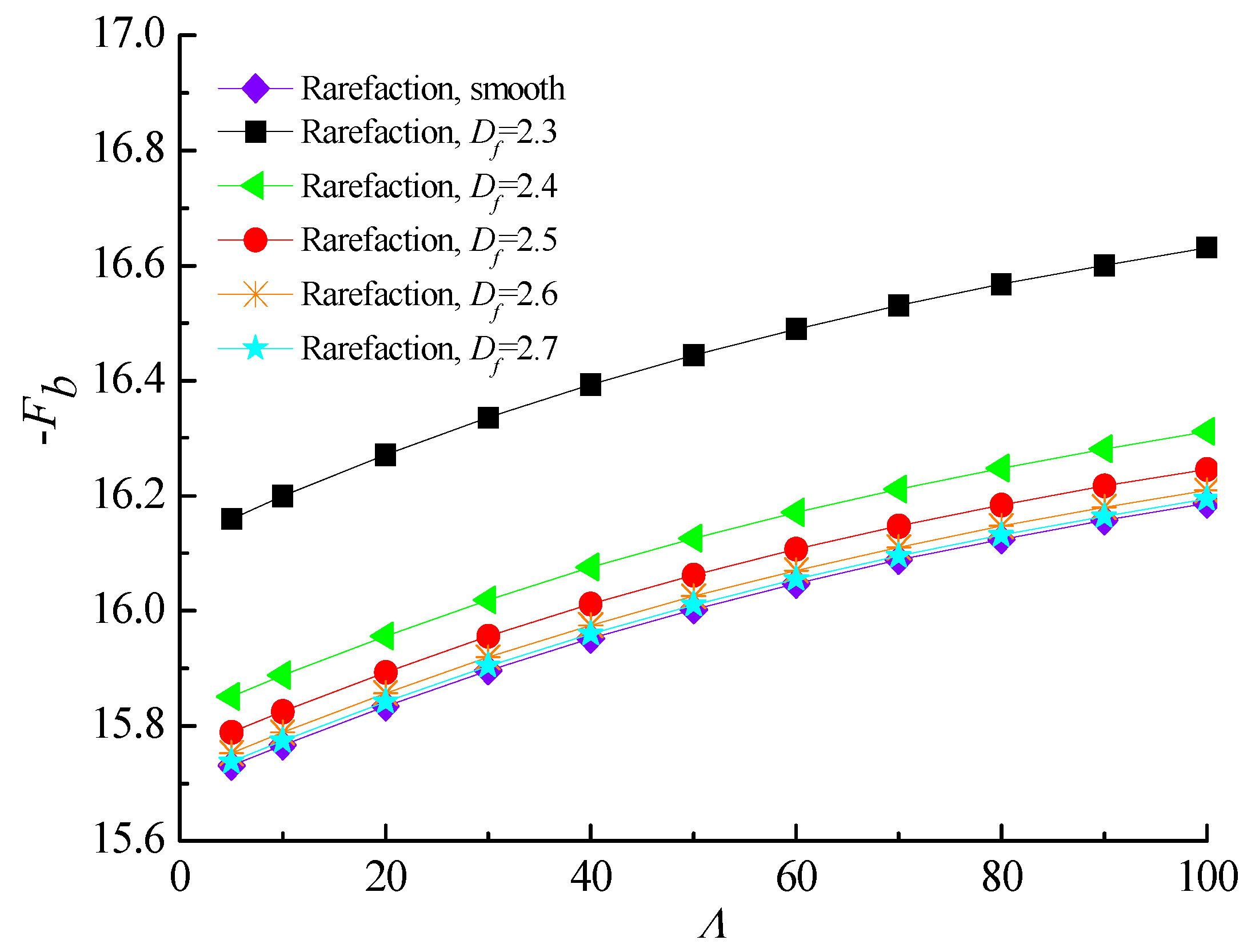 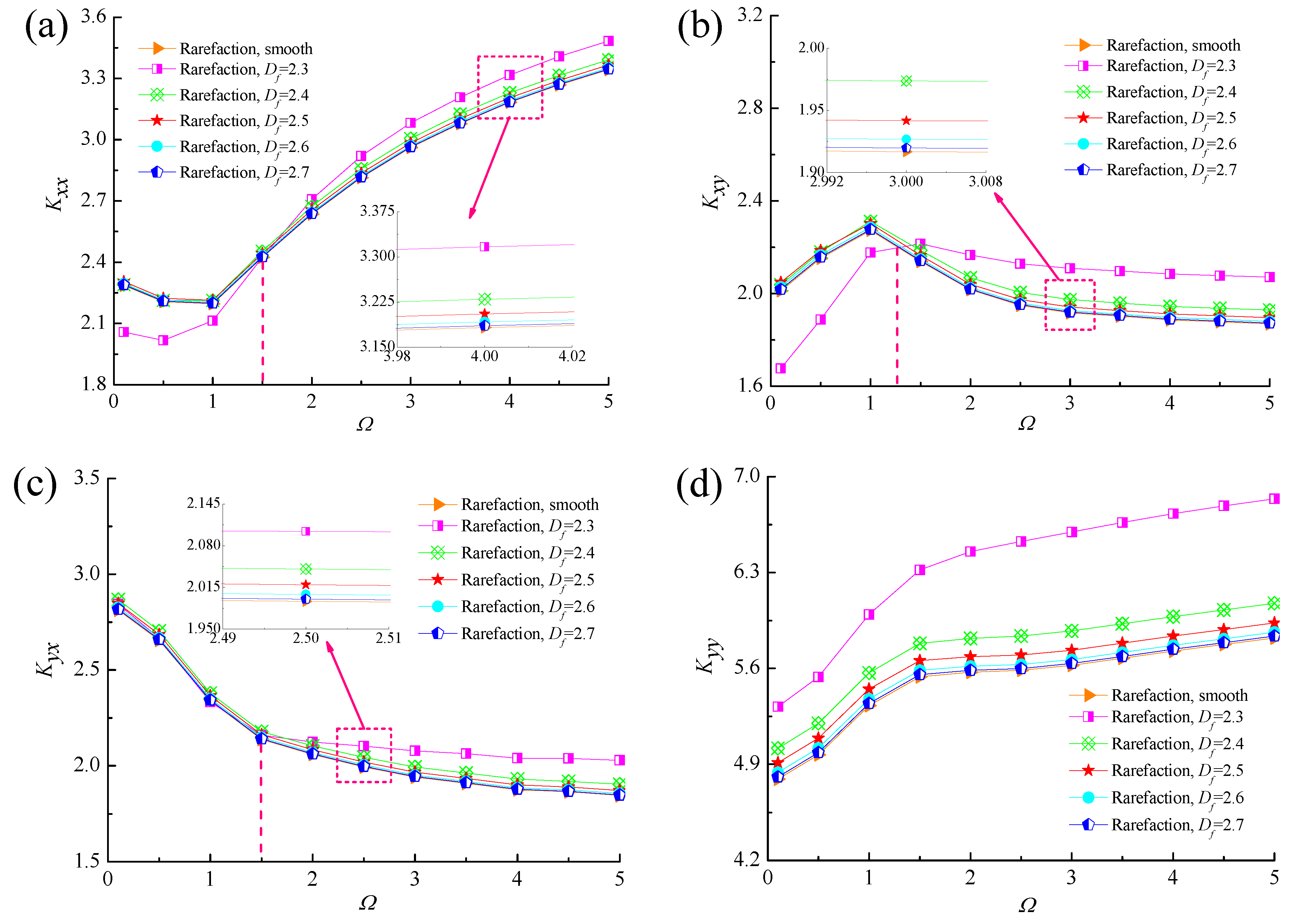 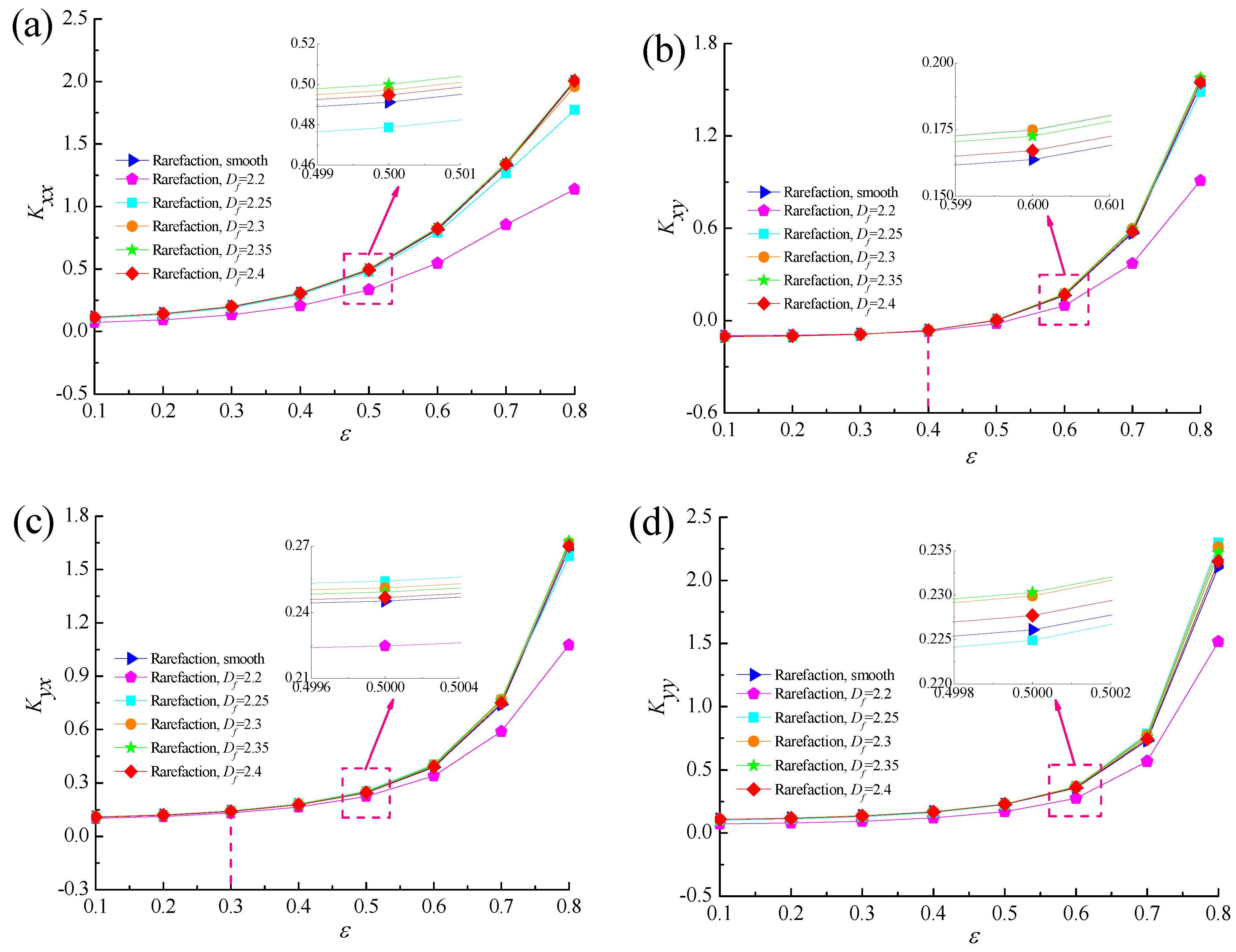 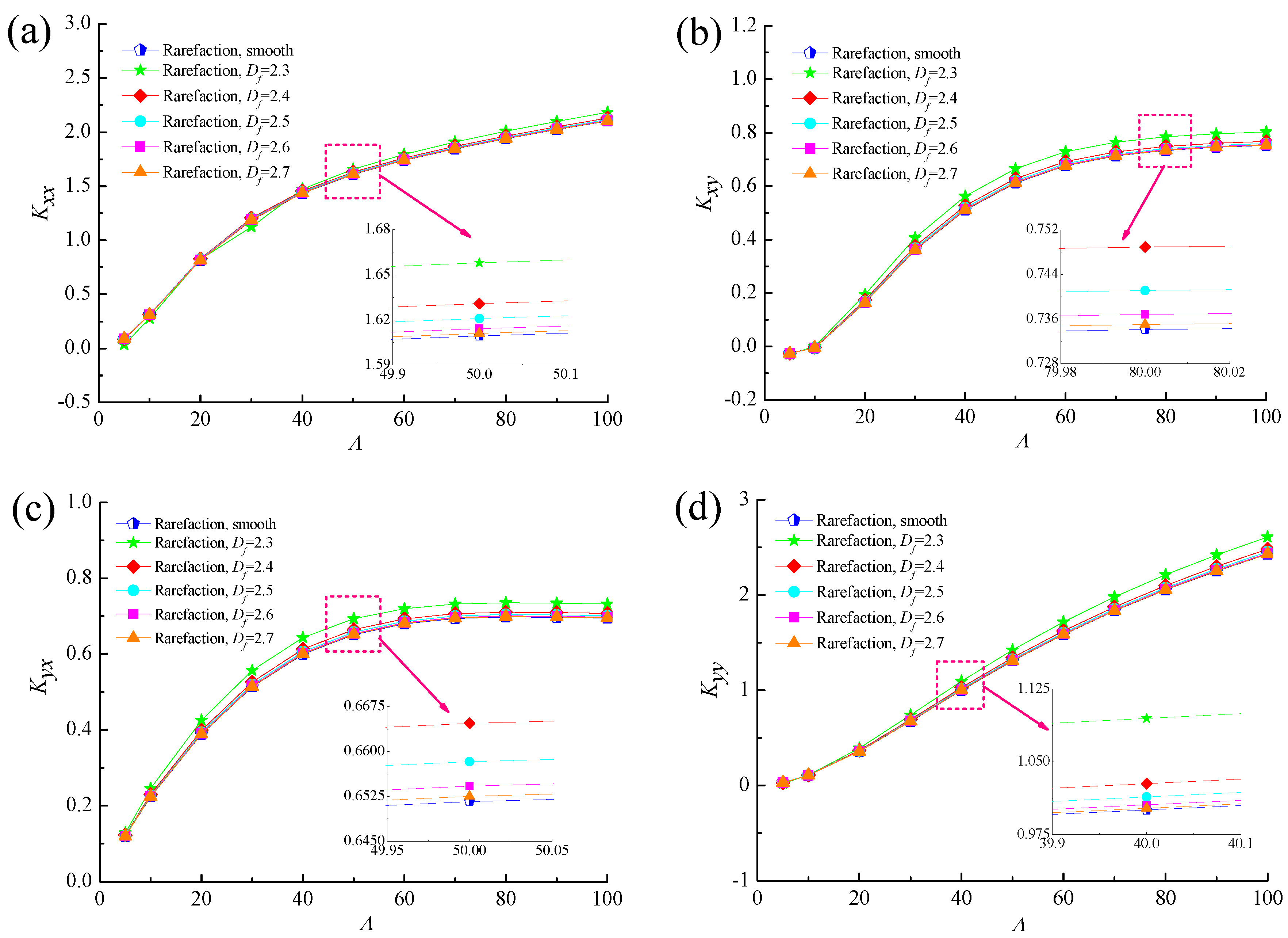