Individual and Combined Effects of Fumonisin B1, Deoxynivalenol and Zearalenone on the Hepatic and Renal Membrane Lipid Integrity of Rats
Previous Article in Journal

Fungi of the genus Fusarium infect cereal crops during the growing season and cause head blight and other diseases. Their toxic secondary metabolites (mycotoxins) contaminate grains. Several dozen toxic compounds produced by fungal pathogens have been identified to date. Type B trichothecenes—deoxynivalenol, its acetyl derivatives and nivalenol (produced mainly by F. graminearum and F. culmorum)—are most commonly detected in cereal grains. “T-2 toxin” (produced by, among others, F. sporotrichioides) belongs to type-A trichothecenes which are more toxic than other trichothecenes. Antagonistic bacteria and fungi can affect pathogens of the genus Fusarium via different modes of action: direct (mycoparasitism or hyperparasitism), mixed-path (antibiotic secretion, production of lytic enzymes) and indirect (induction of host defense responses). Microbial modification of trichothecenes involves acetylation, deacetylation, oxidation, de-epoxidation, and epimerization, and it lowers the pathogenic potential of fungi of the genus Fusarium. Other modifing mechanisms described in the paper involve the physical adsorption of mycotoxins in bacterial cells and the conjugation of mycotoxins to glucose and other compounds in plant and fungal cells. The development of several patents supports the commercialization and wider application of microorganisms biodegrading mycotoxins in grains and, consequently, in feed additives. View Full-Text
Keywords: antagonistic bacteria; antagonistic fungi; biological control; biological modification of fusariotoxins; cereals antagonistic bacteria; antagonistic fungi; biological control; biological modification of fusariotoxins; cereals
►▼ Show Figures 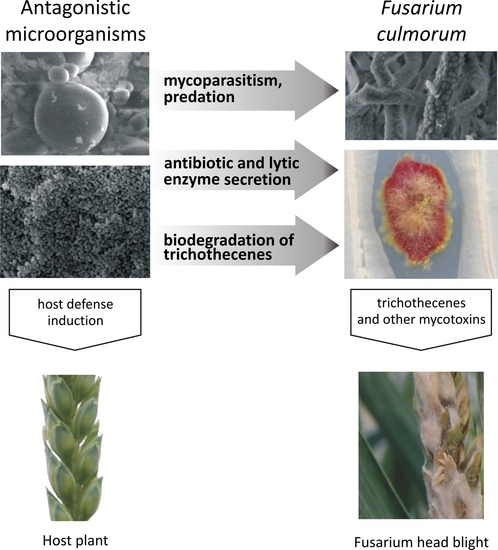