Staphylococcus aureus is an important aetiological agent of food intoxications in the European Union as it can cause gastro-enteritis through the production of various staphylococcal enterotoxins (SEs) in foods. Reported enterotoxin dose levels causing food-borne illness are scarce and varying. Three food poisoning outbreaks due to enterotoxin-producing S. aureus strains which occurred in 2013 in Belgium are described. The outbreaks occurred in an elderly home, at a barbecue event and in a kindergarten and involved 28, 18, and six cases, respectively. Various food leftovers contained coagulase positive staphylococci (CPS). Low levels of staphylococcal enterotoxins ranging between 0.015 ng/g and 0.019 ng/g for enterotoxin A (SEA), and corresponding to 0.132 ng/g for SEC were quantified in the food leftovers for two of the reported outbreaks. Molecular typing of human and food isolates using pulsed-field gel electrophoresis (PFGE) and enterotoxin gene typing, confirmed the link between patients and the suspected foodstuffs. This also demonstrated the high diversity of CPS isolates both in the cases and in healthy persons carrying enterotoxin genes encoding emetic SEs for which no detection methods currently exist. For one outbreak, the investigation pointed out to the food handler who transmitted the outbreak strain to the food. Tools to improve staphylococcal food poisoning (SFP) investigations are presented. View Full-Text
Keywords: Staphylococcus aureus enterotoxins; SEA; SEB; SEC; SED; staphylococcal food poisoning (SFP); pulsed-field gel electrophoresis (PFGE) Staphylococcus aureus enterotoxins; SEA; SEB; SEC; SED; staphylococcal food poisoning (SFP); pulsed-field gel electrophoresis (PFGE)
►▼ Show Figures 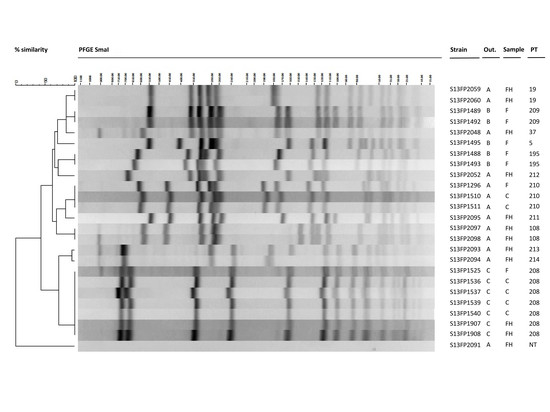