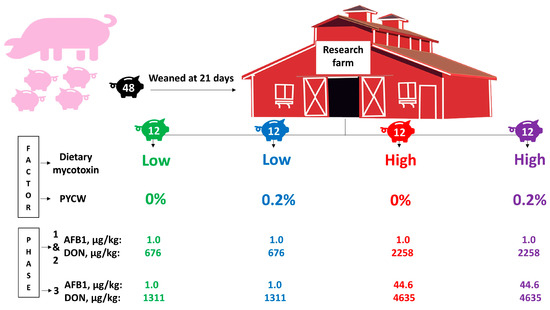 Holanda, D.M.; Yiannikouris, A.; Kim, S.W. Investigation of the Efficacy of a Postbiotic Yeast Cell Wall-Based Blend on Newly-Weaned Pigs under a Dietary Challenge of Multiple Mycotoxins with Emphasis on Deoxynivalenol. Toxins 2020, 12, 504. https://doi.org/10.3390/toxins12080504


Holanda DM, Yiannikouris A, Kim SW. Investigation of the Efficacy of a Postbiotic Yeast Cell Wall-Based Blend on Newly-Weaned Pigs under a Dietary Challenge of Multiple Mycotoxins with Emphasis on Deoxynivalenol. Toxins. 2020; 12(8):504. https://doi.org/10.3390/toxins12080504


Holanda, Debora M., Alexandros Yiannikouris, and Sung W. Kim. 2020. "Investigation of the Efficacy of a Postbiotic Yeast Cell Wall-Based Blend on Newly-Weaned Pigs under a Dietary Challenge of Multiple Mycotoxins with Emphasis on Deoxynivalenol" Toxins 12, no. 8: 504. https://doi.org/10.3390/toxins12080504