Human Milk and Allergic Diseases: An Unsolved Puzzle
Next Article in Special Issue

Effects of Vegetables on Cardiovascular Diseases and Related Mechanisms

Coffee has been the focus of major attention due to its global consumption and impact on health [1]. Historically, coffee consumption was considered to have detrimental effects on health, particularly its contribution to high blood pressure [2]. However, coffee contains many other bioactive compounds, such as polyphenols, furans, pyrroles, and maltol, all of which have recently been hypothesized to have potential beneficial effects on human health [3,4]. Meta-analyses of prospective cohort studies show a J-shaped dose–response relationship between coffee consumption and decreased risk of cardiovascular disease (CVD), including coronary heart disease and stroke [5], and mortality [6] suggesting that moderate consumption is key for its beneficial effects. Studies exploring acute events most likely triggered by coffee-dependent increase in blood pressure showed no substantial increase in mortality due to myocardial infarction [7] and atrial fibrillation [8]. Apart from cardiovascular health, coffee consumption has been hypothesized to affect a number of other conditions, including metabolic status [6] and risk of late-life cognitive impairment [9,10].
Overall, the benefits of coffee on human health seem evident; however, the association between coffee consumption and in particular risk of hypertension remains open for debate. Results from meta-analyses of randomized controlled trials testing the effects of caffeine intake and decaffeinated coffee on blood pressure were null and showed no increase in blood pressure [11,12]; however, these studies simply evaluated the effect of the caffeine in coffee and not of coffee itself. Due to the relatively short-term follow-up, previous studies mostly emphasized the acute effects of coffee intake rather than its long-term effects on blood pressure. Two previous meta-analyses of prospective cohort studies [13,14] reported non-significant increased risk of hypertension associated with higher intake of coffee. However, those meta-analyses only included a few studies reporting dose–response analysis and did not correct for the number of individuals/cases/person-years, and potential confounding factors/effect modifiers, ultimately providing limited-quality evidence. In light of these limitations and the availability of newly published cohort studies, this study aims to conduct a dose–response meta-analysis of prospective cohort studies investigating coffee consumption and the risk of hypertension.

The design, analysis, and reporting of this study is compliant with the Preferred Reporting Items for Systematic Reviews and Meta-Analyses (PRISMA) guidelines (Table S1).

Data were extracted by two independent investigators (G.G. and A.M.) using a standardized extraction form. Discrepancies on the included studies were discussed and resolved by consensus. The following information was collected: (i) first author name; (ii) year of publication; (iii) study cohort name and country; (iv) total number, sex, and age (mean or range) of participants; (v) follow-up period; (vi) distributions of cases and person-years, HRs/RRs/ORs and 95% CIs for all categories of exposure; (vii) coffee intake range for each category of exposure; (viii) adjusted covariates; (ix) prevalence of smokers, diabetic subjects, and participants with low physical activity for each category of exposure; and (x) baseline mean/median systolic and diastolic blood pressure, age, body mass index (BMI), and daily intake of sodium and potassium for each category of coffee intake.

The quality of each study was assessed according to the Newcastle-Ottawa Quality Assessment Scale [15] composed of 3 variables: selection (4 points), comparability (2 points), and outcome (3 points) resulting in a total score of 9 points (9 representing the highest quality). Studies scoring 7–9 points, 3–6 points, and 0–3 points were identified as high, moderate, and low quality, respectively.

In this meta-analysis, ORs and HRs referring to new onset incident cases of hypertension were deemed equivalent to risk ratios (RRs) [16]. When coffee consumption was illustrated by ranges of intake, the midpoint of the range was used. When the highest category was open-ended, we assumed that the width of the upper category was the same as the adjacent category. When the lowest category was open-ended, we set the lower boundary to zero. Two-stage random-effects dose–response meta-analysis was performed to examine linear and non-linear relationship between coffee intake and risk of developing hypertension during follow-up.
First, generalized least-squares (GLS) were used to calculate study-specific coefficients across categories of coffee intake accounting for the correlation within each set of RRs [17,18]. Non-linear dose–response analysis was modeled using restricted cubic splines with 3 knots at fixed percentiles (25%, 50%, and 75%) of the distribution [19]. Coefficients estimated within each study were combined by performing random-effects meta-analysis. DerSimonian and Laird’s method was used for linear dose–response meta-analysis and, in non-linear dose–response meta-analysis, the multivariate extension of the method of moments was used to estimate the RRs. We tested whether the 2 regression coefficients were simultaneously equal to zero and calculated a p-value for non-linearity by testing whether the coefficient of the second spline was equal to zero. A sensitivity analysis by excluding one study at the time was conducted to determine the stability and robustness of the results.
To test for potential confounders, subgroup analyses by sex, type of coffee, and geographical area were performed. To further investigate whether other unmeasured potential confounders should be included in the interpretation of the results, we investigated the distribution of systolic blood pressure, diastolic blood pressure, age, BMI, daily intake of sodium and potassium, percentage of smokers, participants with low physical activity and those with type-2 diabetes across categories of coffee consumption. For this purpose, a separate two-stage bivariate meta-analysis was performed for each confounder variable to determine its association with coffee intake [20]. First, linear regression coefficients (slope and intercept) between coffee intake and the potential confounders above were estimated. Second, we used GLS to synthesize these intercepts and slope coefficients, accounting for the corresponding variance-covariance matrices [21]. To determine the significance of the proposed confounders on the association of coffee consumption and risk of hypertension, a meta-regression analysis was conducted. Specifically, we used the joint slope coefficient of the association as the moderator in the meta-regression analysis. Percentage of smokers was also used as moderator.
Publication bias was assessed using Egger’s regression test while the Cochran Q-test tested for statistical heterogeneity (statistical significance is defined as a p value less than 0.10) and quantified through the multivariate generalization of the I2 statistic (no, low, medium, and high heterogeneity were defined by I2 values <25%, 25–50%, 50–75%, and >75%, respectively). All analyses were performed on R, software version 3.0.3, dosresmeta and mvmeta packages (Development Core Team, Vienna, Austria).

The selection process of studies included in the meta-analysis is illustrated in Figure 1. Out of the 139 studies screened, six studies [22,23,24,25,26,27] involving seven cohorts, 205,349 individuals, and 44,120 cases of hypertension were included (Table 1). The sample of three studies included general population [24,25,26], registered US nurses (2 cohorts) [23], post-menopausal women [27], and post-graduate students [22]. Four cohorts were based in the US [22,23,27] and three in Europe [24,25,26]. Sex-specific (both male and female) risk estimates were provided by three studies [24,25,26], while two papers [23,27] studied only females and one only males [22]. Follow-up periods ranged an average of 3–33 years. All studies adjusted for variables that affect the risk of hypertension, including age, gender, BMI, and smoking status. Overall, the quality of all included studies was high (data not shown).

3.2. Coffee Consumption and Risk of Hypertension

The dose–response regression in Figure 2A illustrates a non-significant decrease in risk of hypertension with up to six cups/day and a 9% significant decrease in risk observed for seven cups/day (RR = 0.91, 95% CI: 0.83–1.00), with moderate evidence of heterogeneity (I2 = 51%, Pheterogeneity = 0.004) and no publication bias (PEgger = 0.755) (Table 2). After exclusion of one study [24], the association between coffee consumption and risk of hypertension became significant with no evidence of heterogeneity and publication bias (Table S2). When linear dose–response regression (test for non-linearity resulted not significant) was modeled, similar risk estimates resulted (Figure 2B), where there was a 1% decreased risk of hypertension with each additional cup of coffee per day (RR = 0.99, 95% CI: 0.98, 1.00; I2 = 21%, Pheterogeneity = 0.241; Figure 3). Stratified analyses by sex, geographical area, type of coffee consumed, and length of follow-up were limited by the small number of datasets; however, significant inverse associations were observed in studies conducted in the US, and those that studied only females, caffeinated coffee, and had longer follow-up (Table 2).

No funding. The authors are grateful to Shivani Bhat for the English language editing. 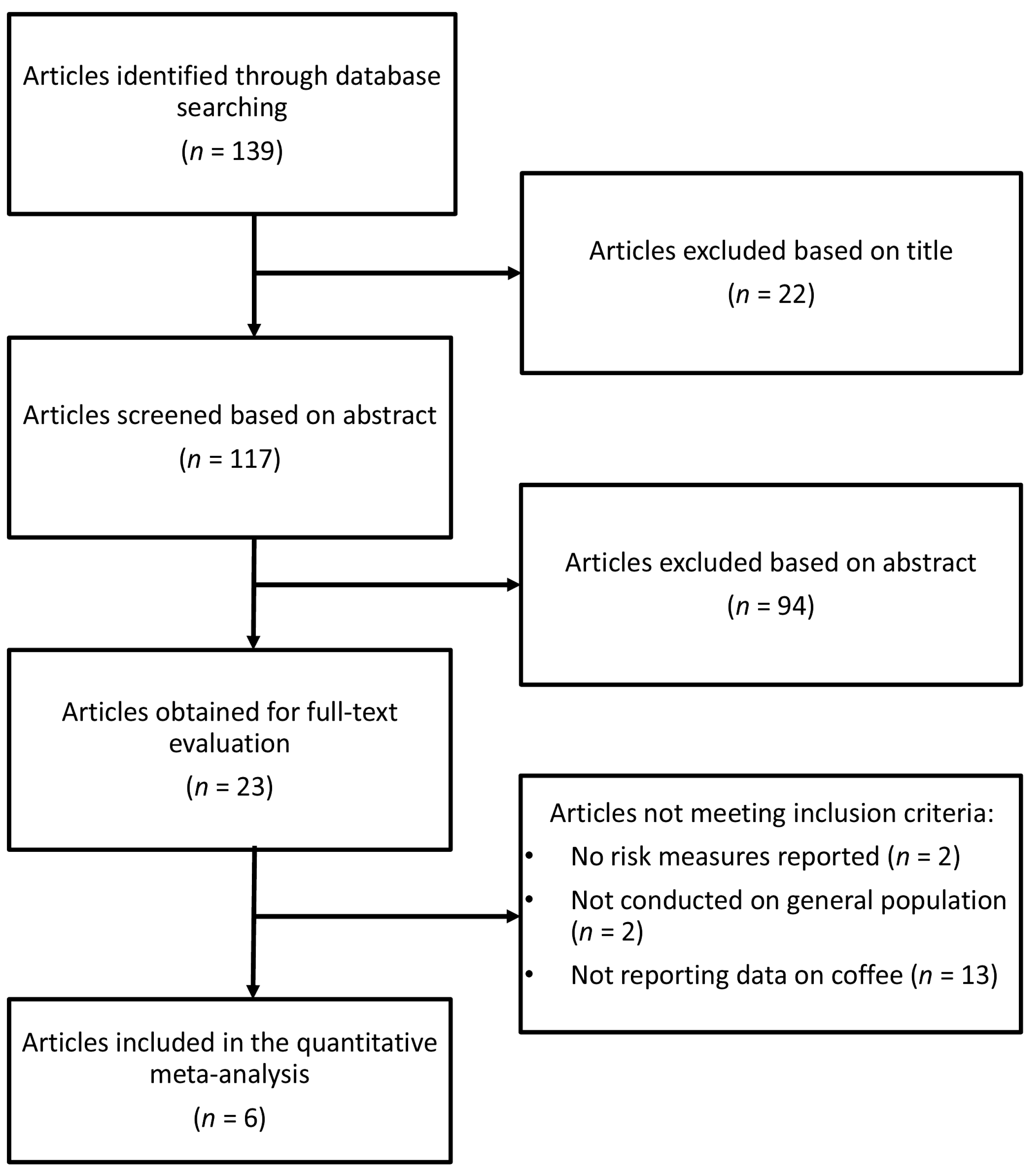