Is Erythrocyte Protoporphyrin a Better Single Screening Test for Iron Deficiency Compared to Hemoglobin or Mean Cell Volume in Children and Women?
Next Article in Special Issue

The study included 200 nondiabetic (fasting serum glucose concentration <126 mg/dL) subjects over 60 years in age with white blood cell levels between 4 × 103/μL and 10 × 103/μL. Participants were recruited from the Goyang-si Heendol Community Welfare Center (Goyang, Korea) via poster advertisements between March 2016 and December 2016. Volunteers who agreed to participate and provided written informed consent were screened to measure white blood cell and fasting serum glucose levels. After the screening, those who met the inclusion criteria were enrolled. The following exclusion criteria were applied: regular consumption (more than 5 times per week) of any probiotic products or taking medicine related to inflammation within one month before screening, history/presence of diabetes, allergy to milk protein, epilepsy, liver disease, kidney disease, immune disease, cancer, or medication/alcohol abuse. Before participation, the purpose of the study was carefully explained to all subjects and written informed consent was obtained. The study protocol was approved by the Institutional Review Board of Yonsei University (1040917-201603-BR-151-06) and was conducted in accordance with the Helsinki Declaration.

A randomized, open-label, placebo-controlled study was conducted on 200 nondiabetic subjects. Over a twelve-week period, the test group (n = 100) consumed one bottle (120 mL) of dairy yogurt containing L. paracasei (L. casei 431®) at 12.0 × 108 cfu/day, B. lactis (BB-12®) at 12.0 × 108 cfu/day and 0.0175% heat-treated L. plantarum (nF1) once per day. The placebo group (n = 100) consumed the same volume of milk once per day (NCT03051425, http://www.clinicaltrials.gov). The two probiotic strains (L. casei 431® and BB-12®) and heat-treated L. plantarum (nF1) were provided by Chr.Hansen A/S (Hθrsholm, Denmark) and Biogenics Korea Co., Ltd (Seoul, Korea), respectively. The final products, including dairy yogurt and milk, were provided by Purmil Co., Ltd. (Seoul, Korea). Computer-generated block randomization was used (placebo:dairy yogurt = 1:1). The study was divided into two periods: the pre-ingestion period, in which nondiabetic subjects did not ingest test or placebo products for two weeks (from screening to week 0), and the ingestion period, in which subjects ingested dairy yogurt or milk during the twelve-week study (from week 0 to week 12).

Body weight (in lightweight clothes and without shoes) (UM0703581; Tanita, Tokyo, Japan) and height (GL-150; G-tech International, Uijeongbu, Korea) were measured in the morning, and body mass index (BMI) was calculated in units of kilograms per square meter (kg/m2). Anthropometric parameters were assessed at weeks 0 and 12. During each testing session, systolic and diastolic blood pressure (BP) were assessed in the supine position after a resting period (20 min). BP was measured twice on the left arm using an automatic BP monitor (FT-200S; Jawon Medical, Gyeongsan, Korea); the two measurements were then averaged.

Information about the subjects’ usual diets was obtained using both a 24-h recall method and a semi-quantitative food frequency questionnaire. We used the former to carry out our analyses and the latter to check if the data collected by the 24-h recall method were representative of their usual dietary patterns. All subjects were given written and verbal instructions by a registered dietitian on how to complete a three-day (two weekdays and one weekend day) dietary record every six weeks. Dietary energy values and nutrient contents from these 3-day food records were calculated using the Computer Aided Nutritional analysis program (CAN-pro 3.0, Korean Nutrition Society, Seoul, Korea). A standardized 3-day physical activity record was also completed at home on the same days in which the dietary record was completed. Total energy expenditure (kcal/day) was calculated from each subject’s activity patterns, including their basal metabolic rate, physical activity over 24 h, and specific dynamic action of the food consumed. Basal metabolic rates for each subject were calculated using the Harris-Benedict equation.

Statistical analysis was performed using SPSS, version 23.0 (IBM/SPSS, Chicago, IL, USA). Skewed variables were logarithmically transformed. Independent t-tests were used to compare parameters between the placebo and test groups. Paired t-tests were used to compare parameters between the baseline measurements and those collected at the 12-week follow-up. Pearson’s correlation coefficient was used to examine the relationships between variables. The results are expressed as the mean ± standard error. For descriptive purposes, mean values are presented using untransformed values. A two-tailed p-value of less than 0.05 was considered statistically significant.

This study initially enrolled 200 subjects: 48 subjects (21 placebo and 27 test subjects) were later omitted, with 23 subjects discontinuing the study for personal reasons and 4 participants requiring antibiotics. Ten participants who had poor compliance (less than 80%) and 4 subjects who experienced weight change greater than 5% from baseline were excluded from the final analysis. Seven subjects were also excluded because their white blood cell level at baseline did not meet the study criteria. Ultimately, 152 subjects (79 placebo and 73 test subjects) were included in the final analysis. No adverse events were reported from the participants. Table 1 shows the clinical characteristics at baseline and at twelve weeks for the placebo and test groups. At baseline, there were no significant differences between the two groups in age, gender distribution, smoking and drinking, BMI, systolic and diastolic BP, serum glucose, lipid profiles, albumin, leukocyte counts, or hs-CRP (Table 1). After 12 weeks of treatment, significant increases were found in serum triglyceride in the test group (yogurt group) and in hs-CRP in the placebo group (milk group). However, there were no significant changes (differences from baseline) in triglyceride or hs-CRP between the placebo and test groups (Table 1). The estimated total calorie intake, physical activity, percent protein intake, percent fat intake, and percent carbohydrate intake did not significantly differ between the two groups at baseline, week six, or week twelve (data not shown).

No significant differences were found in serum concentrations of TNF-α, IgG3 (Table 1), IL-12, IFN-γ, or IgG1 (Figure 1) at baseline between the placebo and test groups. After twelve weeks of treatment, significant increases were found in IL-12 and IgG1 in the test group. In comparing differences from baseline between the placebo and test groups, the test group exhibited greater increases in serum IFN-γ (p = 0.041) and IgG1 (p = 0.022) concentrations (Figure 1).

The main findings of the present study indicated that daily supplementation of one bottle (120 mL) of dairy yogurt containing L. paracasei, B. lactis and heat-treated L. plantarum led to beneficial immunostimulatory effects in healthy elderly subjects. In comparison with the placebo group, the test group showed significantly greater increases in serum NK cell activity at E:T ratios of 10:1, 5:1, 2.5:1, 1.2.5:1 and 0.625:1 after adjusting for baseline values, sex, and changes in diastolic BP. This finding is important because NK cells play an important role in the innate immune response. Indeed, Kawashima et al. [8] showed that the L. plantarum strain YU enhances NK cell activity in spleen cells, and Dallal et al. [7] recently reported that oral administration of L. casei significantly increased NK cytotoxicity in spleen cell cultures from mice bearing invasive ductal carcinoma. Takeda et al. [15] demonstrated that habitual intake of a fermented milk drink containing the L. casei strain Shirota increased NK cell activity in middle-aged volunteers. Moreover, an enhancement in NK cell activity in mouse spleen cells was also found after oral administration of L. bulgaricus OLL1073R-1 or yogurt fermented with this strain [16]. Therefore, the present result showing enhanced NK cell activity in the test group probably resulted from consumption of yogurt containing L. paracasei, B. lactis and heat-treated L. plantarum, which could enhance the immune response, particularly in immunocompromised populations such as the elderly.
NK cells provide a substantial defense against viral infection [17], and low NK cell activity was shown to be associated with the development of infections in healthy elderly subjects [18]. In a murine experiment, NK cells were shown to be a major source of IFN-γ, a potent immune-stimulatory cytokine [19] also known for its antiviral, immunoregulatory, and anti-tumor properties [20]. IFN-γ also has an effect on NK cell regulation [21]; therefore, the increase in serum IFN-γ concentration accompanying the increase in NK cell activity measured in the test group in this study could have contributed to the immune-enhancing action of supplementation with dairy yogurt containing L. paracasei, B. lactis and heat-treated L. plantarum.
IFN-γ is produced not only by NK cells but also T and B cells [22]. Th cells are divided into two functional subclasses, Th1 and Th2, based on the cytokines they produce and their effects on cell-mediated and humoral immunity [23]. Th1 cells produce IL-2, IFN-γ, TNF-α, and IL-12 and enhance cell-mediated immunity, whereas Th2 cells produce IL-4, IL-5, IL-6, and IL-10 and up-regulate humoral immunity. Increased IL-12 production exerts a protective effect, which may be related to increased cellular immunity and phagocytic function [24]. IL-12 is also important for the induction of Th1 immunity [25] and directly activates CD56+ NK cell-mediated cytotoxicity [26]. In the present study, IL-12 levels significantly increased in the test group after twelve weeks of daily consumption of dairy yogurt compared with before supplementation.
The result that IgG1 levels significantly increased after the yogurt supplementation suggests that Th cell activity was promoted. Notably, in addition to being preferentially correlated with Th cells, IgG1 is also associated with optimal activation of complement [27].
The current study had several limitations. First, dietary intake was based on self-reports obtained from weighed food, which could have led to errors. However, measurement errors from self-reported dietary intake and lifestyle variables have been shown to be relatively small [28]. Second, we specifically focused on Korean nondiabetic subjects greater than 60 years in age. Typically, Korean adults consume low amounts of dairy products (60–69 years, 70.1 ± 5.4 g/day) according to the Korea Health Statistics 2013: Korean National Health and Nutrition Examination Survey (KNHANES VI-1). Therefore, our data cannot be generalized to other ethnic groups, other age groups, or severely obese subjects. Finally, we used milk as placebo product. Therefore, we could not conclude the results of this study were derived from probiotics or differences between milk and yogurt. Despite these limitations, this study showed that after consumption of dairy yogurt containing probiotics for 12 weeks, significant increases were found in NK cell activity and serum levels of IL-12 and IgG1. The test group also exhibited greater increases in NK cell activity and serum IFN-γ and IgG1 concentrations than the controls. Importantly, this is the first clinical study to investigate the effect of heat-treated L. plantarum (nF1) on improving immune function. The results demonstrated that consumption of yogurt containing L. paracasei, B. lactis and heat-treated L. plantarum could enhance the immune response, particularly in immunocompromised populations such as the elderly.

This study was supported by the Bio-Synergy Research Project (NRF-2012M3A9C4048762) and the Mid-Career Researcher Program (NRF-2016R1A2B4011662) of the Ministry of Science, ICT and Future Planning through the National Research Foundation, Republic of Korea and “Cooperative Research Program for Agriculture Science & Technology Development (Project title: Development of functional material for immune enhancement using Weissella cibaria, Project No: PJ010835)” Rural Development Administration, Republic of Korea. 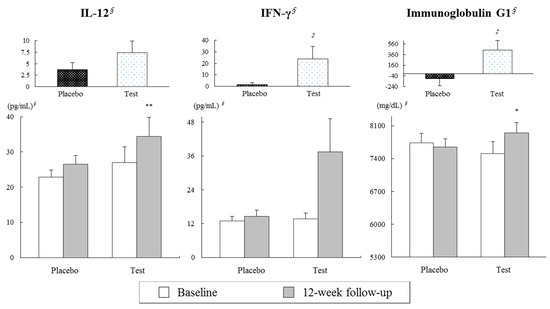