Anti-Fatigue Effects of Small Molecule Oligopeptides Isolated from Panax ginseng C. A. Meyer in Mice
Next Article in Special Issue

:
Vitamin D induces a diverse range of biological effects, including important functions in bone health, calcium homeostasis and, more recently, on immune function. The role of vitamin D during infection is of particular interest given data from epidemiological studies suggesting that vitamin D deficiency is associated with an increased risk of infection. Vitamin D has diverse immunomodulatory functions, although its role during bacterial infection remains unclear. In this study, we examined the effects of 1,25(OH)2D3, the active metabolite of vitamin D, on peripheral blood mononuclear cells (PBMCs) and purified immune cell subsets isolated from healthy adults following stimulation with the bacterial ligands heat-killed pneumococcal serotype 19F (HK19F) and lipopolysaccharide (LPS). We found that 1,25(OH)2D3 significantly reduced pro-inflammatory cytokines TNF-α, IFN-γ, and IL-1β as well as the chemokine IL-8 for both ligands (three- to 53-fold), while anti-inflammatory IL-10 was increased (two-fold, p = 0.016) in HK19F-stimulated monocytes. Levels of HK19F-specific IFN-γ were significantly higher (11.7-fold, p = 0.038) in vitamin D-insufficient adults (<50 nmol/L) compared to sufficient adults (>50 nmol/L). Vitamin D also shifted the pro-inflammatory/anti-inflammatory balance towards an anti-inflammatory phenotype and increased the CD14 expression on monocytes (p = 0.008) in response to LPS but not HK19F stimulation. These results suggest that 1,25(OH)2D3 may be an important regulator of the inflammatory response and supports further in vivo and clinical studies to confirm the potential benefits of vitamin D in this context.
Keywords:
vitamin D; inflammation; bacterial infection; pneumococcal

Global burden of disease data estimates that infections are responsible for ~3 million deaths of children under five years of age per year [1]. Bacterial infections comprise a significant proportion of this, with Gram-positive and Gram-negative bacteria such as Streptococcus pneumoniae, Escherichia coli, and Salmonella typhi the leading candidates [2]. Exposure to these organisms can be extremely high, especially in low-income country settings, leading to persistent activation of host inflammatory responses. Local immune responses in the early stages of infection, such as the recruitment of neutrophils and release of pro-inflammatory cytokines (IL-1β, TNF-α) play an important role in pathogen clearance. However, failure to clear the pathogen may lead to persistent infections and excessive inflammation, leading to serious diseases, such as pneumonia, meningitis, and diarrheal illness [2,3].
An increasing number of epidemiological studies have demonstrated a strong association between low levels of hydroxyvitamin D3 [25(OH)D3], the inactive precursor of vitamin D, and an increased risk of respiratory infections [4,5], especially in countries with low exposure to sunlight [6,7,8], while the data is less clear for enteric infections. In Mongolia, the high burden of pneumonia has been linked to vitamin D deficiency, and supplementation in young children protected against acute respiratory infection [9]. However, a recent review of randomized controlled trials of vitamin D supplementation for the prevention of respiratory infections was inconclusive [10].
Vitamin D has diverse immunomodulatory functions. The vitamin D receptor (VDR) is widely expressed on all immune cellular subsets and VDR ligation by vitamin D results in activation of key innate immune cells such as monocytes, macrophages, and neutrophils leading to enhanced chemotactic, phagocytic, and bactericidal activities [11,12,13]. The VDR binds 1,25(OH)2D3 with a much greater affinity than 25(OH)D3 [14]. Vitamin D also modulates the expression of Toll-like receptors (TLRs) [15] and the co-receptor CD14 [16] on important innate immune cells, promotes the conversion of 25(OH)D3 to the active form (dihydroxyvitamin D3—1,25(OH)2D3), and induces production of anti-microbial peptides, such as cathelicidin, which inhibit the growth of both Gram-positive and Gram-negative bacteria [17,18]. Vitamin D also promotes anti-inflammatory effects through up-regulation of IL-10 [19]. Therefore, it is likely that vitamin D has a critical role in modulating bacterial-specific inflammatory responses.
Given the paucity of data in relation to the immunomodulatory effects and possible protection elicited by vitamin D, we hypothesized that the active form of vitamin D, 1,25(OH)2D3, modulates critical host responses important in host protection against Gram-positive and Gram-negative infection.

The active metabolite of vitamin D3, 1,25(OH)2D3, and the inactive preform, 25(OH)D3, were purchased from Tocris Bioscience (Bristol, UK). Purified lipopolysaccharide (LPS) from Escherichia coli serotype 055:B5 was purchased from Sigma-Aldrich (St. Louis, MO, USA). Heat-killed pneumococcal bacteria serotype 19F (HK19F; reference strain originally obtained from the University of Alabama) was prepared by harvesting the mid-log phase of the bacterial culture and incubating in a water bath at 80 °C for 60 min. The bacterial concentration was determined before and after heat-killing by plating on horse blood agar plates. The HK19F was stored in aliquots at −80 °C prior to use, and the same batch was used throughout the study. Neutrophils were derived by stimulation of a HL-60 cell line (ATCC® CCL-240™, Manassas, VA, USA) with 100 mM N,N-dimethylformamide for five days.

Neutrophils cultured in a 24-well plate at a concentration of 4 × 106 cells/mL. Cells were either pre-treated with 100 nmol/L of 1,25(OH)2D3 or left untreated and incubated at 37 °C, 5% CO2 for 1 h. Transwell plates (6.5 mm Transwell® with a 8.0 μm pore polycarbonate membrane insert, Corning, NY, USA) were used to test neutrophil migration. The bottom chamber contained 400 μL of 5.2 mg/mL casein (as a chemoattractant) and the membrane was submerged in casein for 30 min at 37 °C and 5% CO2. Neutrophils (5 × 104 cells) were added to the top chamber and incubated at 37 °C and 5% CO2 for 1 h. Following this, the top chambers were removed and the number of migrated cells were determined by cell counting using a haemocytometer.

This study supports the anti-inflammatory effects of 1,25(OH)2D3 during bacterial infection. These results have important implications for the role of vitamin D in protection against infectious disease, particularly in high-risk settings involving low sunlight and increased exposure to pathogenic microorganisms. Further investigations, particularly in rigorous clinical trials, are required to understand to elucidate the beneficial effects of vitamin D in this context.

This work was funded by a Murdoch Children’s Research Institute Theme Investment Grant as well as a sub-grant from the Centre of Research Excellence for Pneumococcal Vaccinology awarded by the Australian National Health and Medical Research Council. We also acknowledge the support of the Victorian Government’s Operational Infrastructure Research Program. 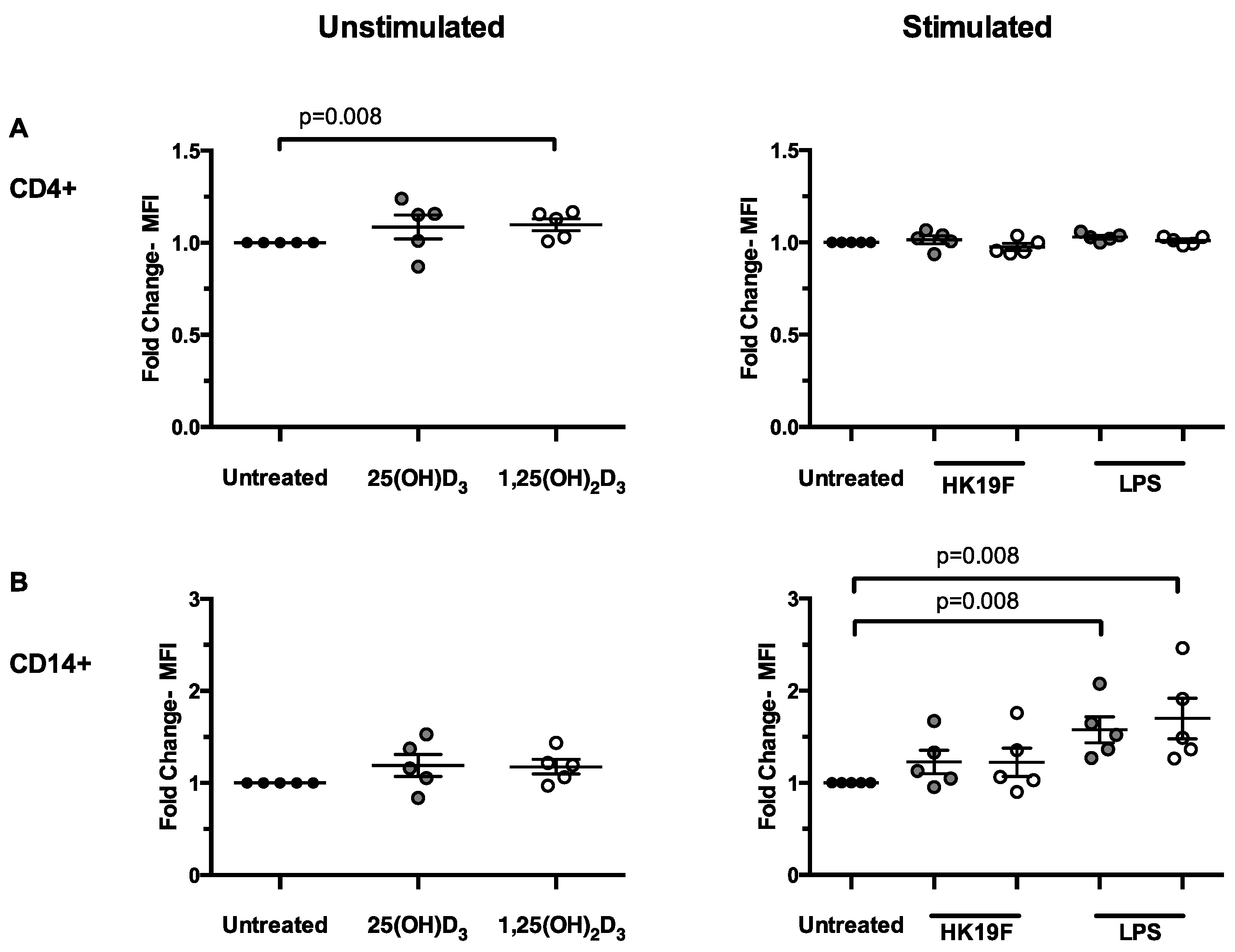