Effects of Ingesting Both Catechins and Chlorogenic Acids on Glucose, Incretin, and Insulin Sensitivity in Healthy Men: A Randomized, Double-Blinded, Placebo-Controlled Crossover Trial
Next Article in Special Issue

Periconceptional Maternal Protein Intake from Animal and Plant Sources and the Impact on Early and Late Prenatal Growth and Birthweight: The Rotterdam Periconceptional Cohort
Previous Article in Journal

Effect of Fortified Formula on Growth and Nutritional Status in Young Children: A Systematic Review and Meta-Analysis
Previous Article in Special Issue

Plasma FGF21 Levels Are Not Associated with Weight Loss or Improvements in Metabolic Health Markers upon 12 Weeks of Energy Restriction: Secondary Analysis of an RCT

Fibroblast growth factor 21 (FGF21) is a peptide hormone that regulates metabolic homeostasis [1,2]. The exact biological functions and regulation of FGF21 vary widely between tissues and are not completely understood [1,2]. Circulating FGF21 levels are typically elevated in conditions of impaired metabolic health, such as obesity, non-alcoholic fatty liver disease (NAFLD) and type 2 diabetes (T2DM) [3,4]. Accordingly, circulating FGF21 levels have been reported to positively associate with BMI, body fat, liver fat content, blood pressure, insulin resistance (IR) and atherogenic lipid profiles [5,6], as well as predict incident metabolic syndrome and T2DM [7,8]. It is unclear whether and how weight loss and accompanying health improvements affect FGF21 levels, with some trials reporting reduced levels of circulating FGF21 upon diet-induced weight loss [9,10,11,12,13], and others reporting no effects on FGF21 [14,15,16,17,18,19,20].
Recently, FGF21 has been implicated in the metabolic adaptations to both under- and overfeeding. In the DIETFITS trial, fasting FGF21 level was associated with diet-induced weight loss, with higher FGF21 levels at baseline being associated with larger weight loss in response to a 12-month low-fat or low-carbohydrate diet [20,21]. Furthermore, in a 6-week trial, the change in circulating FGF21 upon energy restriction was associated with weight loss, with individuals with larger increases in fasting FGF21 achieving greater weight loss [22]. In addition, in a short-term trial, greater increases in fasting plasma FGF21 in response to a 1-day hypercaloric low-protein, high-fat diet were associated with larger weight loss in free-living conditions after 6 months [23]. Plasma FGF21 (response) thus seems to be related to the ability to lose weight.
Next to its metabolic effects, FGF21 also appears to play a role in the regulation of nutrient intake via central nervous system (CNS) signaling. Multiple large human genome-wide association studies (GWAS) have reported associations between FGF21 gene variants and carbohydrate, sugar, and alcohol consumption and sweet-taste preference [24,25,26,27]. Furthermore, higher fasting FGF21 levels have been associated with lower sweet-taste preference [26] and lower soda consumption [28]. Animal studies suggest that in response to carbohydrate and in particular sugar intake, FGF21 is induced in the liver, enters the circulation and subsequently acts as negative feedback signal via the liver-brain-axis to suppress further sweet-taste preference and carbohydrate intake [29,30,31]. As of yet, evidence from human studies on the link between plasma FGF21 and nutrient intake and taste preference is sparse.
We previously reported the effects of two 12-week energy restriction (ER) diets differing in nutrient quality in overweight and obese adults [32]. Both ER diets resulted in substantial weight loss and concomitant improvements in various health parameters, including reduced liver fat, and decreased fasting glucose and insulin levels. In the present study, we investigated whether these diet-induced changes in body weight and related health outcomes were accompanied by changes in fasting and postprandial FGF21 levels. Additionally, we explored correlations of plasma FGF21 with markers of metabolic health, weight loss, habitual (macro)nutrient intake and sweet-taste preference.

The present study is a secondary analysis of a 12-week parallel randomized controlled trial (RCT) that was performed at Wageningen University, the Netherlands, in 2014. The aim of this trial was to investigate the effects of two different ER diets on weight loss and cardiometabolic health outcomes. Details have been described previously [32].

The study population consisted of 110 women and men aged 40–70 years with abdominal obesity (BMI > 27 kg/m2 or waist circumference > 88 cm for women or >102 cm for men). Exclusion criteria were diagnosis of diabetes, heavy alcohol consumption, smoking, unstable body weight, diagnosis of long-term medical condition, and use of medication that is known to interfere with glucose or lipid metabolism.
Eligible subjects were randomly assigned to one of three intervention groups: a 25% ER high-nutrient-quality diet (n = 40), a 25% ER low-nutrient-quality diet (n = 40), or a control group (n = 30). At baseline and after 12 weeks of intervention, participants visited hospital Gelderse Vallei (Ede, the Netherlands) for an MRI scan and—on a separate day—visited Wageningen University after an overnight fast for measurements of general health and blood metabolites in the fasting state, as well as in response to a mixed meal.

The dietary intervention strategy has been described in detail previously [32]. Briefly, both the ER diets were energy restricted by 25% of the estimated energy requirement of each participant. The high-nutrient-quality diet (HQ) was designed to improve metabolic health and contained an increased amount of soy protein, fiber, monounsaturated fat (MUFA), and omega-3 fatty acids. The low-nutrient-quality diet (LQ) contained an increased amount of saturated fat (SFA), animal protein, and fructose. The control group did not receive an intervention and was instructed to maintain their usual dietary habits. Participants in the ER groups received dietary advice and key food products. Adherence to the ER diets was assessed based on participants’ food diaries, taking reported deviations from the dietary advice and leftover key food products into account [32].

Systolic and diastolic blood pressure were measured automatically for 10 min with a 3-min interval using a DINAMAP PRO100. After an overnight fast, blood samples were collected from an intravenous cannula before and 30, 60, 120, 180, 240, and 360 min after consumption of a liquid mixed meal (3833 kJ; 76.3 g carbohydrates, 17.6 g protein, 60 g fat). To estimate IR, we used the homeostatic model assessment of insulin resistance (HOMA-IR), which is calculated as (fasting glucose [mmol/L] × fasting insulin [mU/L])/22.5 [33]. IR was defined as HOMA-IR > 2.5 [34]. Incremental area under the curves (iAUC) for glucose and insulin were calculated using the trapezoid method.

Plasma FGF21 levels were measured in plasma samples from the fasting state and 120 min after consumption of the mixed meal using ELISA, according to manufacturer’s instructions (FGF-21 Human ELISA Kit, ab125966, Abcam, Cambridge, UK). The inter- and intra-assay coefficients of variation were 12.4% and 5.9%, respectively. All samples from two subjects and one sample from another subject fell outside of the range of the standard curve and were therefore excluded from analyses.

A total of 100 subjects completed the study (n = 6 drop-outs in HQ, n = 1 drop-out in LQ, and n = 3 drop-outs in the control group [32]). Plasma FGF21 data were available from 98 subjects. Approximately half of the study population were women, median age was 62 years and median BMI was 30.8 kg/m2. Baseline demographics and clinical characteristics were similar across intervention groups (Table 1).
In five participants (n = 2 in HQ, n = 1 in LQ, and n = 2 in the control group), plasma FGF21 levels deviated more than 2 SD from the mean both in the fasting and postprandial state, and both at baseline and after 12 weeks of intervention. Another two participants (n = 1 in HQ and n = 1 in LQ) had deviating plasma FGF21 levels in the postprandial state at baseline or in the fasting state after 12 weeks of intervention, respectively.
The reported dietary intakes of participants on the ER diets were in agreement with the advised (macro)nutrient composition, with higher intakes of MUFA, polyunsaturated fat, plant-based protein, and fiber, and lower intakes of SFA and fructose in the high-nutrient-quality diet compared to the low-nutrient-quality diet [32].

3.3. Plasma FGF21 and Correlations with Markers of Metabolic Health

In conclusion, weight loss and concomitant health improvements upon a 12-week 25% ER diet were not accompanied by changes in fasting or postprandial plasma FGF21 levels in middle-aged individuals with abdominal obesity. Neither overall ER nor nutrient quality affected plasma FGF21. In addition, we found no robust evidence that fasting plasma FGF21 is a marker for metabolic health status. We did find indications that circulating FGF21 dynamics in response to a nutritional challenge may reflect metabolic health status. FGF21′s metabolic regulation and functions are greatly complex and further research on the potential of circulating FGF21 dynamics as a marker of metabolic health is warranted.

This research was funded by the Division of Human Nutrition and Health, Wageningen University, The Netherlands and received no external funding.

The study was conducted in accordance with the Declaration of Helsinki and approved by the Medical Ethics Committee of Wageningen University (protocol code NL44614.081.13, approved on 3 June 2014). The study is registered at ClinicalTrials.gov as NCT02194504.

Data presented in this manuscript are available upon reasonable request.

We thank the volunteers that participated in this study and the Wageningen Belly Fat Study team. We thank Nhien Ly and Lisette van de Lende for technical assistance with the biochemical analyses and Suzanne de Bruijn and Fildzah Karunia Putri for assistance with the food preference ranking test. 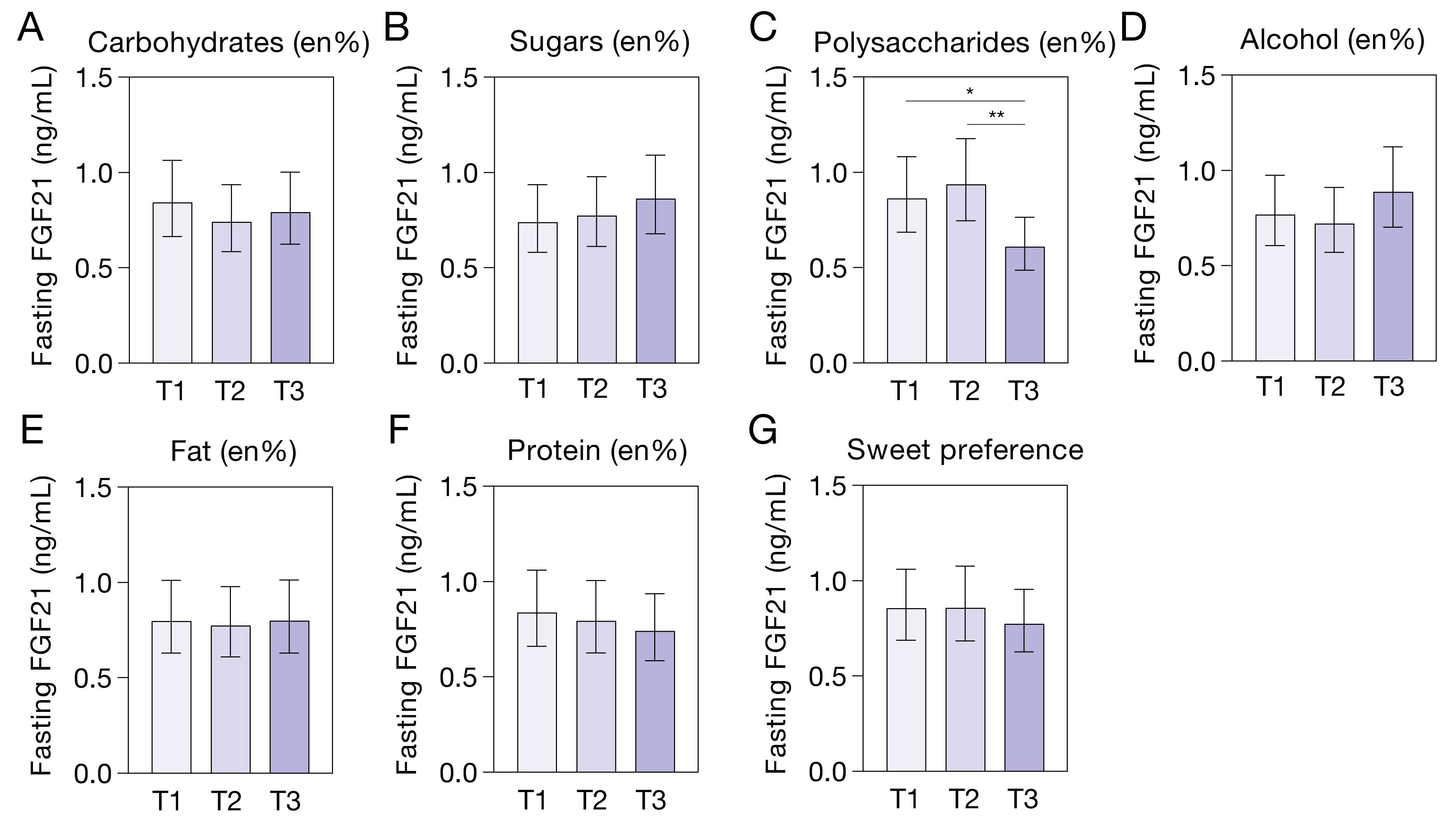