The Impact of COVID-19 on Eating Environments and Activity in Early Childhood Education and Care in Alberta, Canada: A Cross-Sectional Study
Previous Article in Journal

Reduced Glycemic Index (GI) of breakfast has been linked to improved cognitive performance in both children and adult populations across the morning. However, few studies have profiled the post-prandial glycemic response (PPGR) in younger children. The aim of this study was to assess PPGR to breakfast interventions differing in GI in healthy children aged 5–7 years. Eleven subjects completed an open-label, randomized, cross-over trial, receiving three equicaloric test beverages (260 kcal) consisting of 125 mL semi-skimmed milk and 50 g sugar (either glucose, sucrose, or isomaltulose). On a fourth occasion, the sucrose beverage was delivered as intermittent supply. PPGR was measured over 180 min using Continuous Glucose Monitoring (CGM). The incremental area under the curve (3h-iAUC) was highest for the glucose beverage, followed by intermittent sucrose (−21%, p = 0.288), sucrose (−27%, p = 0.139), and isomaltulose (−48%, p = 0.018). The isomaltulose beverage induced the smallest Cmax (7.8 mmol/L vs. >9.2 mmol/L for others) and the longest duration with moderate glucose level, between baseline value and 7.8 mmol/L (150 vs. <115 min for others). These results confirm that substituting mid-high GI sugars (e.g., sucrose and glucose) with low GI sugars (e.g., isomaltulose) during breakfast are a viable strategy for sustained energy release and glycemic response during the morning even in younger children. View Full-Text
Keywords: post-prandial glycemic response (PPGR); cognition; children; Glycemic Index (GI) post-prandial glycemic response (PPGR); cognition; children; Glycemic Index (GI)
►▼ Show Figures 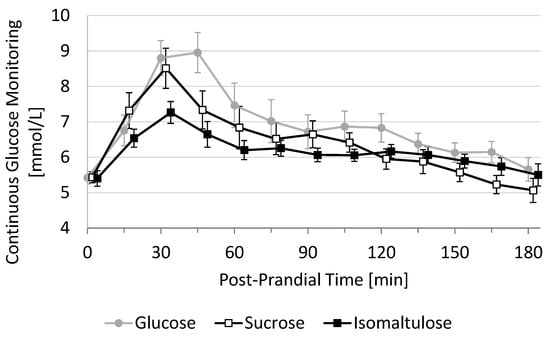