Trait Energy and Fatigue Modify the Effects of Caffeine on Mood, Cognitive and Fine-Motor Task Performance: A Post-Hoc Study
Previous Article in Journal

Effects of a Low Dose of Caffeine Alone or as Part of a Green Coffee Extract, in a Rat Dietary Model of Lean Non-Alcoholic Fatty Liver Disease without Inflammation

Coffee is one of the most popular beverages consumed worldwide. Roasted coffee is a complex mixture of thousands of bioactive compounds, and some of them have numerous potential health-promoting properties that have been extensively studied in the cardiovascular and central nervous systems, with relatively much less attention given to other body systems, such as the gastrointestinal tract and its particular connection with the brain, known as the brain–gut axis. This narrative review provides an overview of the effect of coffee brew; its by-products; and its components on the gastrointestinal mucosa (mainly involved in permeability, secretion, and proliferation), the neural and non-neural components of the gut wall responsible for its motor function, and the brain–gut axis. Despite in vitro, in vivo, and epidemiological studies having shown that coffee may exert multiple effects on the digestive tract, including antioxidant, anti-inflammatory, and antiproliferative effects on the mucosa, and pro-motility effects on the external muscle layers, much is still surprisingly unknown. Further studies are needed to understand the mechanisms of action of certain health-promoting properties of coffee on the gastrointestinal tract and to transfer this knowledge to the industry to develop functional foods to improve the gastrointestinal and brain–gut axis health. View Full-Text
Keywords: brain–gut axis; caffeine; coffee; coffee by-products; dietary fiber; enteric; gastrointestinal; melanoidins; mucosa; myenteric brain–gut axis; caffeine; coffee; coffee by-products; dietary fiber; enteric; gastrointestinal; melanoidins; mucosa; myenteric
►▼ Show Figures 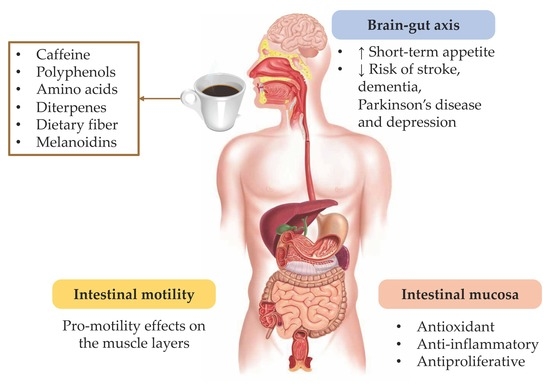