The Effect of a Multivitamin and Mineral Supplement on Immune Function in Healthy Older Adults: A Double-Blind, Randomized, Controlled Trial
Next Article in Special Issue

Acute Effects of Lixisenatide on Energy Intake in Healthy Subjects and Patients with Type 2 Diabetes: Relationship to Gastric Emptying and Intragastric Distribution

This study was approved (Ethics approval: SAM237) by the South Australian Health and Medical Research Institute Animal Ethics Committee. All experimental protocols were performed in alignment with the Australian Code of Practice for the Care and Use of Animals for Scientific Purposes.

Eight-week-old male C57BL/6 mice (n = 54) were group-housed in a 12:12 h light-dark cycle within a temperature (24 ± 1 °C) controlled facility. Mice were provided ad libitum access to either a standard laboratory diet (SLD; 12%, 23%, and 65% of energy from fat, protein, and carbohydrates, respectively; Specialty Feeds, Western Australia, Australia; n = 30) or HFD (60%, 20%, and 20% of energy from fat, protein, and carbohydrates, respectively; adapted from Research Diets Inc., New Brunswick, NJ, USA; n = 24). Consistent with the previous literature, the HFD-induced obese mouse model was chosen as both a model of obesity [17] and impaired glucose tolerance [18]. After 12 weeks on their respective diets, a sub-group of SLD (n = 10; SLD-Chronic (Ch)) and HFD-mice (n = 8; HFD-Ch) received ad libitum isoleucine (1.5% w/v; Purebulk Inc., Roseburg, OR, USA) supplemented in the drinking water. The remaining SLD (n = 20) and HFD-mice (n = 16) continued with ad libitum access to normal drinking water. At 16 weeks, all mice were singly housed and underwent an OGTT (at 1400 h) and gastric emptying breath test (at 0900 h) in random order with a three-day recovery between tests. In each diet group, the mice provided normal drinking water were subdivided into two groups, receiving either an oral gavage of water (n = 10, SLD-Control (C); n = 8, HFD-C) or isoleucine (300 mg/kg body weight; n = 10, SLD-Acute (A); n = 8, HFD-A) 30 min before the OGTT or GEBT. The SLD and HFD-Ch mice received an oral gavage of drinking water similar to the control groups. The doses for acute and chronic isoleucine treatments were chosen based on previous studies [8,12]. At 17 weeks, all mice were placed in metabolic monitoring cages. The body weight of all the mice was measured weekly, except the final two weeks due to the different interventions.

Consistent with previous studies [19,20], mice were fasted for six hours (0800–1400 h) before receiving an oral gavage of either isoleucine (SLD/HFD-A groups) or water (SLD/HFD-C and SLD/HFD-Ch groups). After 30 min, all mice received an oral gavage of 20% D-glucose (1 g/kg BW), a dose chosen to ensure the HFD-mice did not experience a severe hyperglycemic response with blood glucose levels beyond the range of the glucose monitor. Blood was collected from a tail prick before isoleucine/water administration, considered as the baseline, and again at 15, 30, 45, 60, and 120 min post glucose administration. Blood glucose levels were determined with an ACCU CHEK Performa monitor (ACCU CHEK, New South Wales, Australia).

Gastric emptying of a solid meal was determined using a non-invasive breath test as previously described [21,22]. Mice were fasted overnight (1600—0900 h) prior to an oral gavage of either isoleucine (SLD/HFD-A) or water (SLD/HFD-C and SLD/HFD-Ch). After 30 min, all mice were provided 0.1 g of baked egg yolk containing 13C-octanoic acid (1 μL/g; 99% enrichment, Cambridge Isotope Laboratories, Andover, MA, USA) to consume voluntarily within 1 min. Breath samples were collected before isoleucine administration (baseline; 0 min) and again at regular intervals (5 min intervals from 5–30 min and 15-min intervals from 30–150 min) after egg consumption. Breath samples were analysed for the 13CO2 content using an isotope ratio mass spectrometer (Europa Scientific, Crewe, UK). The 13CO2 excretion data were analysed by non-linear regression analysis for curve fitting and for calculation of gastric half emptying time (t ½) [23]. Gastric half emptying time was not measured in the HFD-mice due to sampling difficulties; the egg yolk was not consumed within 1 min which invalidates results.

Mice were fasted overnight (1600–0900 h) then anaesthetised with isoflurane (5% in medical oxygen). The nose-to-tail length and abdominal circumference of mice were measured. Blood was collected from the abdominal aorta and transferred to ethylenediaminetetraacetic acid (EDTA) tubes (Thermo Fisher Scientific, Victoria, Australia). Plasma was extracted by centrifugation at 1000 g and 4 °C for 15 min, and snap-frozen in liquid nitrogen prior to storage at −80 °C until further analysis. Liver, gonadal fat pads, and inter-scapula brown fat pads were collected and weighed. Lean mass was determined by the final body weight minus the weight of collected fat pads. A section of the liver was fixed in 4% paraformaldehyde for 4 h, cryoprotected overnight in 30% sucrose in a phosphate buffer, frozen in Tissue-Tek O.C.T. compound (Sakura Finetek USA Inc., Torrance, CA, USA) and stored at −80 °C before processing for histology.

3.1. Chronic Isoleucine Treatment Does Not Affect Weight Gain and Adiposity

3.6. Acute and Chronic Isoleucine Treatment Do Not Affect Gastric Emptying

R.O. performed the experiments, collected and analysed the data, and drafted the manuscript; H.L., S.M.L., R.Y., and S.K. contributed to data collection and analysis; S.S.U., C.F.-B., L.H., and A.J.P. supervised the project and provided input into the experimental design and analysis of data. All authors have read and agreed to the published version of the manuscript.

We thank Cathryn Pape, research project officer at the Commonwealth Scientific and Industrial Research Organisation, for assistance in utilising their AU480 AU analyser to analyse mouse plasma and the Bioresources staff at SAHMRI for assistance in animal husbandary. 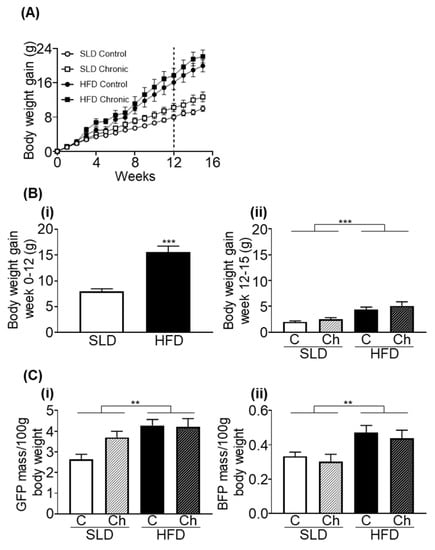 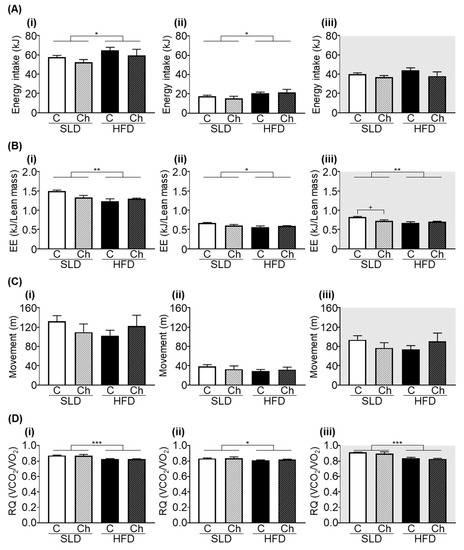 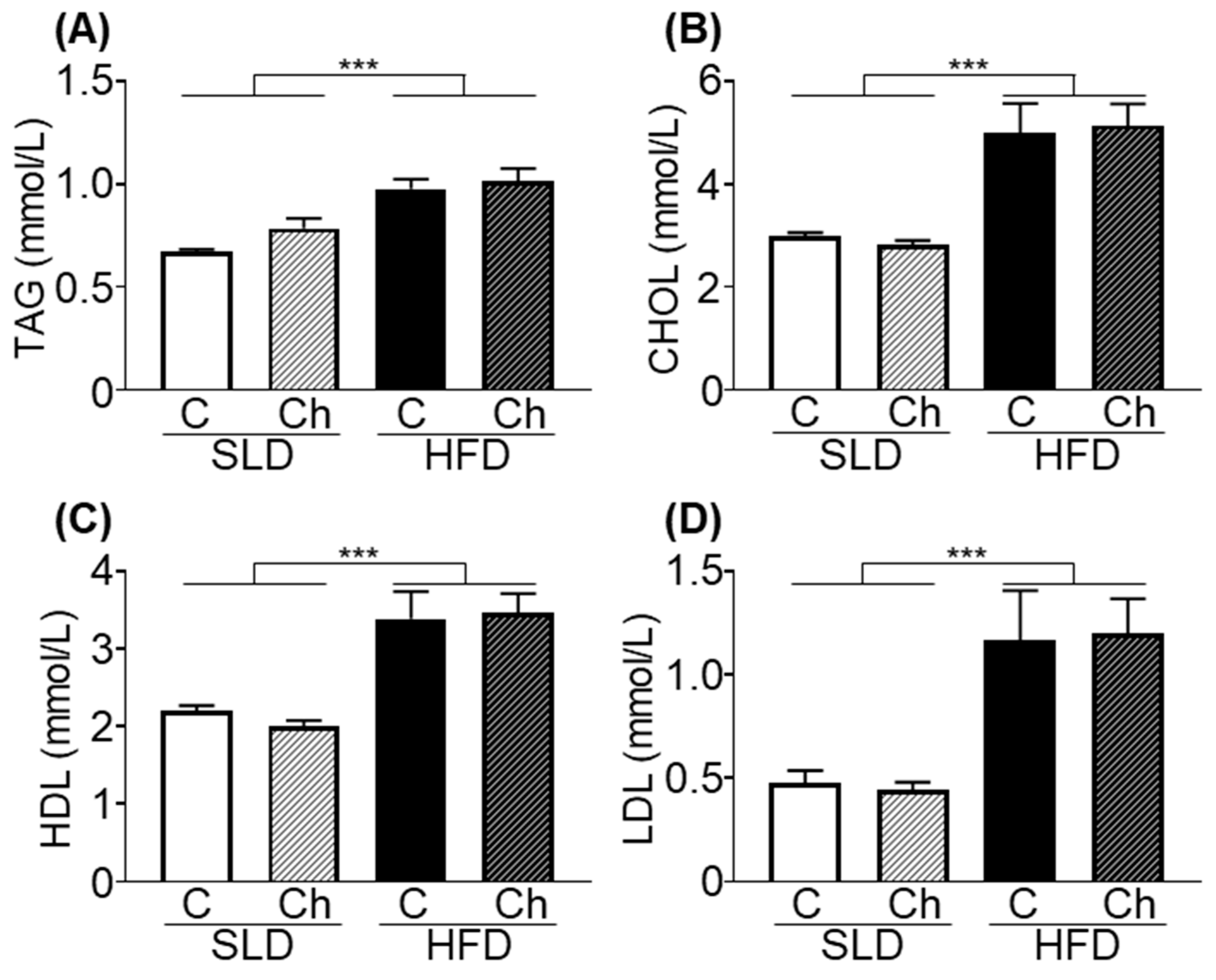 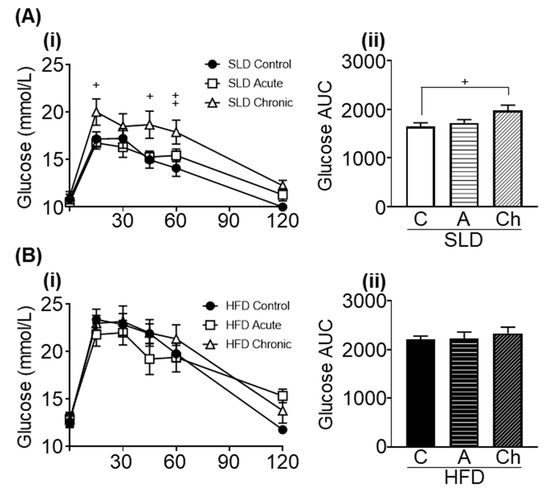 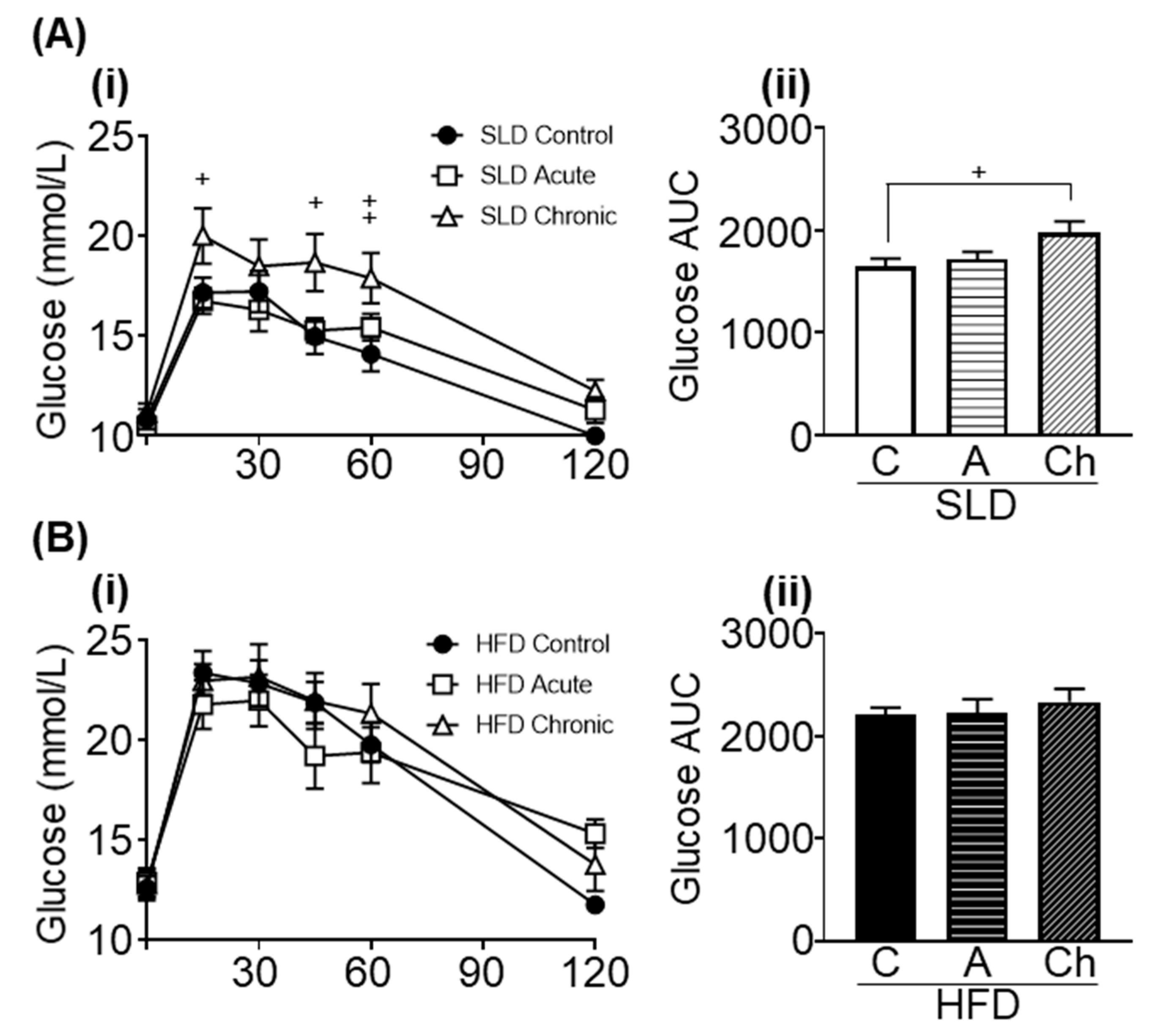