To see if the molecular weight (MW) and viscosity of oat β-glucan (OBG) when taken before eating determine its effect on postprandial glycemic responses (PPRG), healthy overnight-fasted subjects (n = 16) were studied on eight separate occasions. Subjects consumed 200 mL water alone (Control) or with 4 g OBG varying in MW and viscosity followed, 2–3 min later, by 113 g white-bread. Blood was taken fasting and at 15, 30, 45, 60, 90, and 120 min after starting to eat. None of the OBG treatments differed significantly from the Control for the a-priori primary endpoint of glucose peak-rise or secondary endpoint of incremental area-under-the-curve (iAUC) over 0–120 min. However, significant differences from the Control were seen for glucose iAUC over 0–45 min and time to peak (TTP) glucose. Lower log(MW) and log(viscosity) were associated with higher iAUC 0–45 (p < 0.001) and shorter TTP (p < 0.001). We conclude that when 4 g OBG is taken as a preload, reducing MW does not affect glucose peak rise or iAUC0-120, but rather accelerates the rise in blood glucose and reduces the time it takes glucose to reach the peak. However, this is based on post-hoc calculation of iAUC0-45 and TTP and needs to be confirmed in a subsequent study. View Full-Text
Keywords: humans; oat β-glucan; acute glycemic response; dietary fiber; preload; carbohydrates humans; oat β-glucan; acute glycemic response; dietary fiber; preload; carbohydrates
►▼ Show Figures 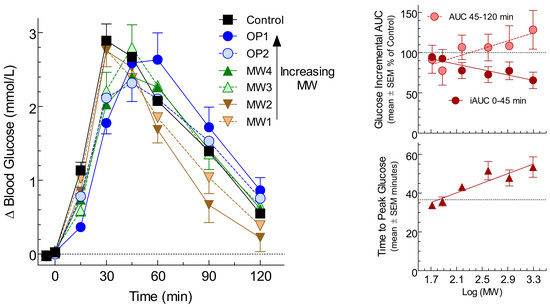