Food Addiction among Female Patients Seeking Treatment for an Eating Disorder: Prevalence and Associated Factors
Next Article in Special Issue

Profiles of Polyphenol Intake and Type 2 Diabetes Risk in 60,586 Women Followed for 20 Years: Results from the E3N Cohort Study
Previous Article in Journal

Living with Gluten and Other Food Intolerances: Self-Reported Diagnoses and Management
Previous Article in Special Issue

We enrolled patients with systolic HF at Juntendo University Hospital (Tokyo, Japan) if they met the following criteria: men and women aged ≥20 years, patients with HF due to ischemic or non-ischemic cardiomyopathy, patients with an LV ejection fraction (LVEF) <50% on echocardiography, patients labeled as New York Heart Association (NYHA) functional class ≥II, and patients with a stable clinical status evidenced by the absence of symptoms related to the acute exacerbation of HF. Exclusion criteria were as follows: patients who cannot perform a 6-min walk test; those who cannot answer the questionnaire without assistance; current smokers; patients with acute coronary syndrome or that have had cardiac surgery during the previous 4 weeks; patients with organic valvular heart diseases, chronic inflammatory diseases, chronic lung diseases, or malignancies; and patients under dialysis. This prospective observational pilot study (UMIN-ID: 000014088) was approved by the Juntendo University Hospital Institutional Review Board (#14-019), and complied with the ethical principles of the Declaration of Helsinki. Written informed consent was obtained from all participants.

On the morning of the day before starting astaxanthin supplementation, height and weight were measured, body mass index (BMI) was calculated, blood pressure and heart rate were measured, and venous blood samples were obtained after an overnight fast. The estimated glomerular filtration rate (eGFR) based on serum creatinine level was assessed [14]. Plasma concentration of astaxanthin was measured via high-performance liquid chromatography whose details were previously described [15]. In addition to serum C-reactive protein (CRP) levels, tumor necrosis factor-α (TNF-α) levels—an inflammatory marker—were measured using a commercially available human Quantikine HS ELISA kit (R&D systems, Minneapolis, MN, USA). Urinary 8-hydroxy-2′-deoxyguanosine (8-OHdG) concentrations were measured using the urinary oxidative stress marker measurement system, ICR-001 (Immunochromatography method, Techno Medica Co.). Urinary creatinine was also measured, and data were reported as the urinary 8-OHdG (ng/mL)/creatinine (mg/mL) ratio. Assays of oxidative stress in serum were performed with the Diacron reactive oxygen metabolites (dROM) test, which measures the total oxidant capacity of samples relative to the chromogenic substrate N, N-diethylparaphenylendiamin. Total antioxidant capacity was assayed using the biological antioxidant potential (BAP) test, which measures the capacity of a sample to reduce ferric ions to ferrous ions with a thiocyanate derivative as a chromogen. All analyses were performed with a free radical analyzer system (Free Carrio Duo, Wismerll Company Ltd., Tokyo, Japan).
To assess cardiac function, cardiac chamber quantification using 2-dimensional echocardiography was performed according to American Society of Echocardiography guidelines [16] on the day before starting astaxanthin supplementation. The LVEF was calculated according to the modified Simpson method. Images were stored in at least 3 cardiac cycles, and the final values represented the average of at least 3 measurements. All echocardiographic studies were performed and interpreted by experienced cardiologists who were blinded to the details of the present study and other clinical data of participants. Sonographers were blinded to study enrollment and were not involved in the present study. Lastly, the plasma level of B-type natriuretic peptide (BNP) was measured, and, to quantify exercise tolerance, the 6-min walk test was performed according to established methods; the total distance walked in 6 min (6MWD) was recorded [17].

In this prospective small uncontrolled pilot study, once daily for 3 months, patients orally ingested a commercially available astaxanthin supplement containing 12 mg of astaxanthin, 40 mg of tocotorienol, and 30 mg of L-ascorbic acid 2-glucoside (AstaReal ACT, AstaReal Co., Ltd., Tokyo, Japan). The patients visited our HF clinic every month, and no changes in the other medications were allowed during the study period. Measurements of BMI, blood pressure, and heart rate were performed at every clinic visit. Blood and urine sampling, echocardiography, and 6-min walk test were repeated at a follow-up visit 3 months after starting astaxanthin supplementation.

Overall, 19 eligible patients were enrolled, all of whom had been diagnosed as having HF and treated for at least 6 months at enrollment. All the other medications remained unchanged during the study period. Three patients were excluded, two because of lost follow-up records and one because of worsening spinal stenosis at follow-up that caused difficulty during the 6MWD test. Thus, data of 16 patients were analyzed. Characteristics of these patients are summarized in Table 1. Baseline data regarding echocardiography, urinary and blood samples are shown in Table 2 and Figure 1, Figure 2 and Figure 3. A significant correlation was found between the baseline dROM level and LVEF (r = −0.516; p = 0.041), whereas no such correlations were observed between the baseline dROM and BNP levels or 6MWD (r = 0.279, p = 0.253 and r = −0.345, p = 0.053, respectively). In addition, no significant correlations were found between the other oxidative stress/inflammatory markers (i.e., BAP, 8-OHdG, CRP, and TNF-α concentrations) and the baseline HF-related parameters (i.e., LVEF, plasma BNP level, or 6MWD).
From baseline to after 3 months of astaxanthin supplementation, blood levels of astaxanthin increased significantly from 0 [0] ng/mL to 133.7 [122.1] ng/mL (p < 0.001). No complaints or adverse events related to astaxanthin administration were observed. From baseline to 3 months, dROM decreased significantly (Figure 1).
LVEF and 6MWD significantly increased following 3-month astaxanthin supplementation (Figure 2 and Figure 3).
However, the values of the other parameters did not change after the 3-month supplementation period (Table 2).

3.2. Relationships between the Baseline dROM Level and the %Δ in Inflammatory and Oxidative Stress Markers, and between the %Δ in LVEF and 6MWD from Baseline to 3 Months

3.3. Relationships between Δ in Astaxanthin Levels, %Δ in Inflammatory and Oxidative Stress Markers, and %Δ in Cardiac Functions from Baseline to 3 Months

Correlation coefficients and p-values regarding relationships between Δ in astaxanthin levels, %Δ in inflammatory and oxidative stress markers, and %Δ in cardiac functions from baseline to 3 months are shown in Table 3. Significant correlations were observed between %Δ in dROM level and %Δ in LVEF, LV end-diastolic volume index, and LV end-systolic volume index.

In conclusion, this pilot study found that after 3 months of astaxanthin supplementation, the levels of the oxidative stress markers decreased and improvements were observed in both cardiac contractility and exercise tolerance in the HF patients with LV systolic dysfunction. In addition, improvements in cardiac function correlated significantly with the suppression of oxidative stress, suggesting that suppression of HF-associated oxidative stress by astaxanthin supplementation may have therapeutic potential for improving underlying cardiac dysfunction and impaired exercise capacity.

This study was supported by AstaReal Co., Ltd., and partly by a Grant-in-Aid for Scientific Research (Grant Number, 26507010); JSPS KAKENHI (Grant Number, JP17K09527); JSPS KAKENHI (Grant Number, 18K15904); a grant to The Intractable Respiratory Diseases and Pulmonary Hypertension Research Group from the Ministry of Health, Labor and Welfare (H29-027); and MEXT∗-Supported Program for the Strategic Research Foundation at Private Universities, 2014–2018 (*Ministry of Education, Culture, Sports, Science and Technology). These funding sources have no other roles in this study. 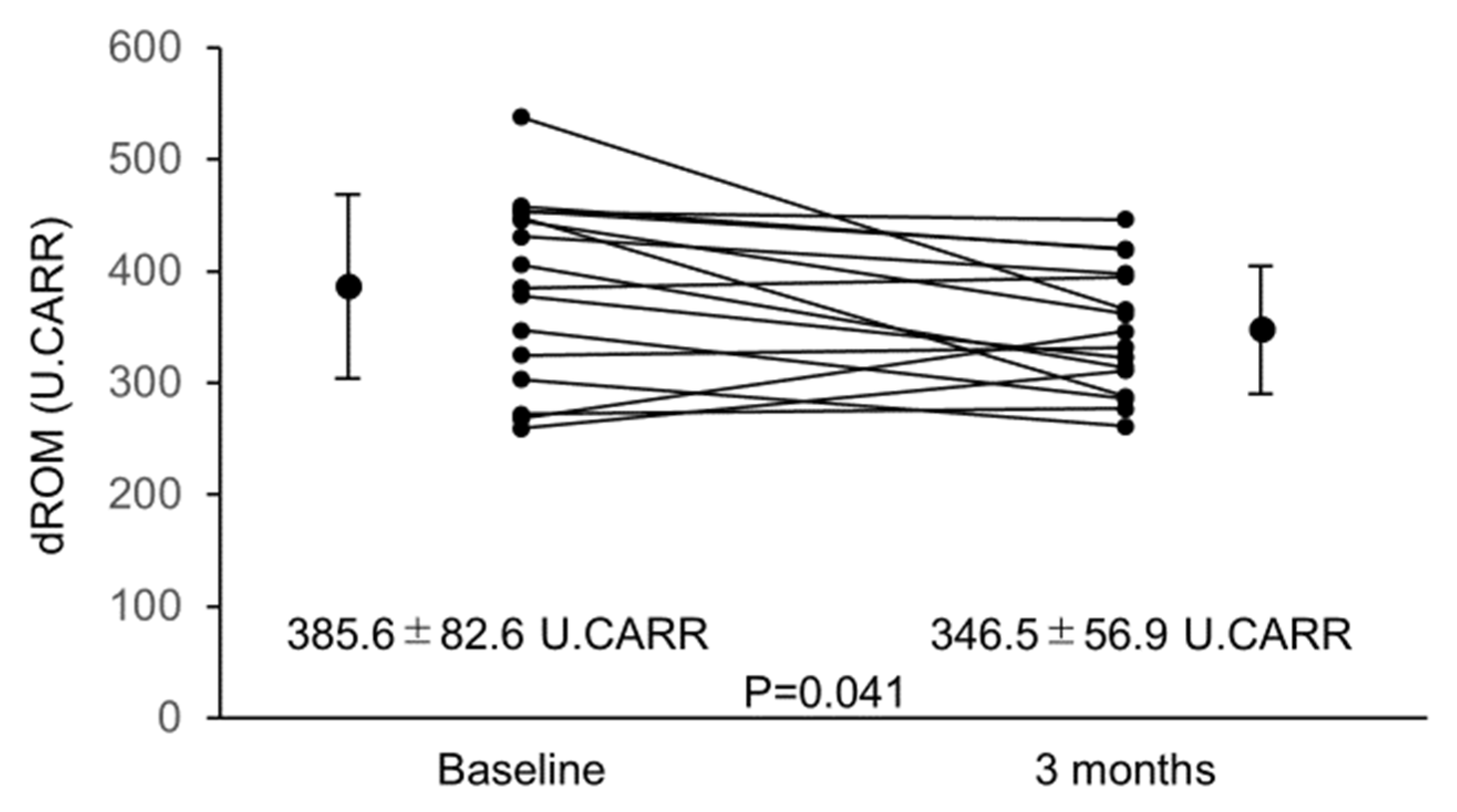 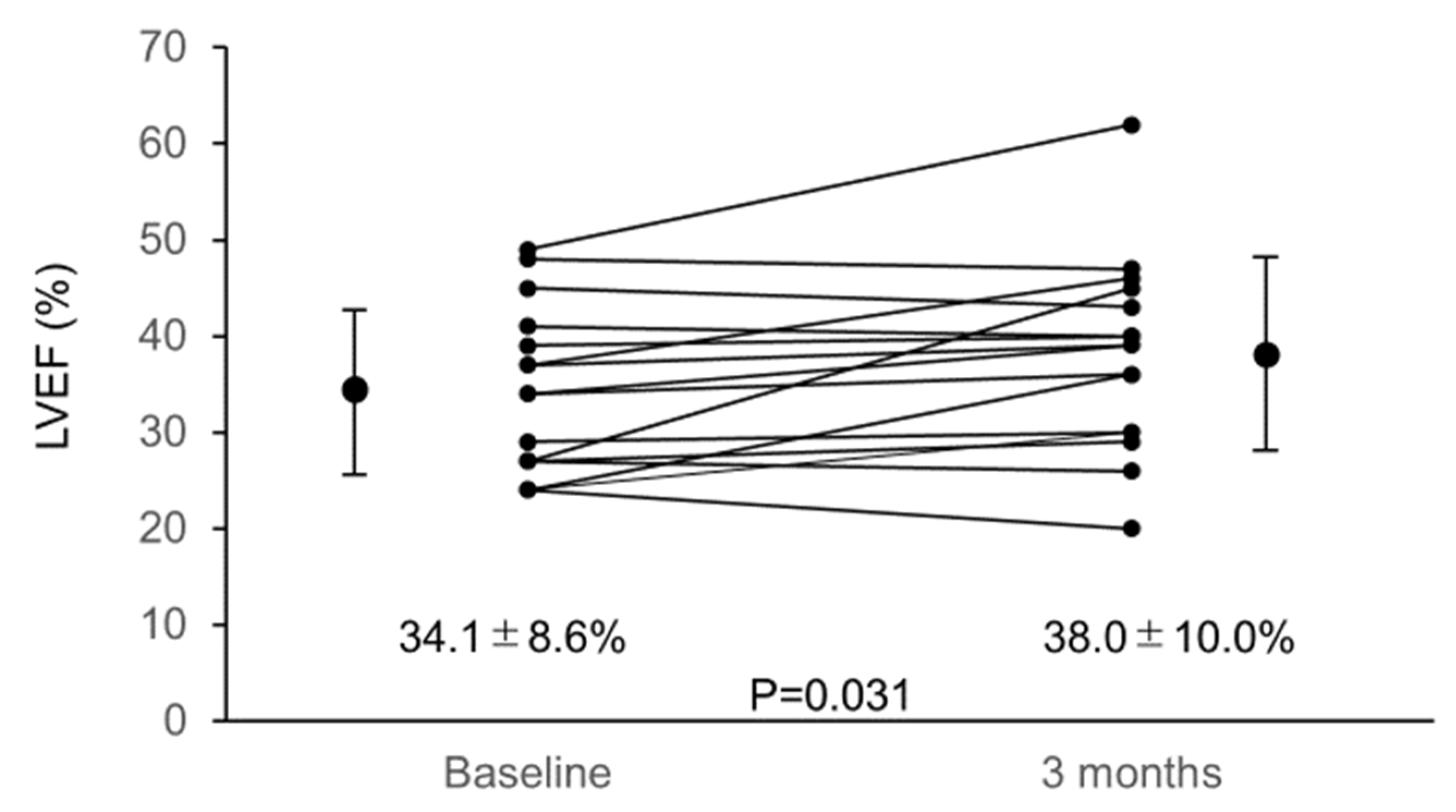