The Neuropathology of Gluten-Related Neurological Disorders: A Systematic Review

Living with Gluten and Other Food Intolerances: Self-Reported Diagnoses and Management

People suffering from a food intolerance (FI) tend to initiate restrictive diets such as a gluten-free diet (GFD), to alleviate their symptoms. To learn about how people live with these problems in daily life (independent of their medical diagnoses), 1203 participants answered a previously validated questionnaire and were divided into: G1 (those self-reporting symptoms after gluten consumption) and G2 (those informing no discomfort after gluten consumption). Self-reported clinical characteristics, diagnoses and diets followed were registered. Twenty nine percent referred some FI (8.5% in G1). In G1, self-reported diagnoses were more frequent (p < 0.0001), including a high proportion of eating and mood disorders. Diagnoses were reported to be given by a physician, but GFD was indicated by professional and nonprofessional persons. In G2, despite declaring no symptoms after gluten consumption, 11.1% followed a GFD. The most frequent answer in both groups was that GFD was followed “to care for my health”, suggesting that some celiac patients do not acknowledge it as treatment. Conclusion: close to one third of the population report suffering from some FI. Those perceiving themselves as gluten intolerant report more diseases (p < 0.0001). A GFD is followed by ~11% of those declaring no symptoms after gluten ingestion. This diet is perceived as a healthy eating option. View Full-Text
Keywords: food intolerance; celiac disease; gluten sensitivity; gluten-free diet food intolerance; celiac disease; gluten sensitivity; gluten-free diet
►▼ Show Figures 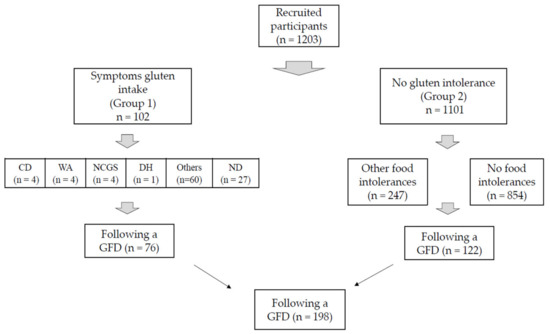