Vitamin D (VitD) has a critical role in phosphorous–calcium metabolism as well as an important role in the immune system. In the human body, VitD is synthesized as cholecalciferol in the skin, but this process requires sunlight (UVB) radiation. Numerous reports showed high prevalence of VitD deficiency, particularly during the winter season, indicating the importance of VitD supplementation. Various factors can affect the absorption of VitD, including dosage and formulation. The primary study objective was to examine the efficiency of supplementation with three different formulations containing cholecalciferol in comparison with the control group. The secondary objective was to identify other factors affecting increase in serum 25-OH-VitD. A randomized controlled intervention study was conducted in Slovenia during wintertime (January– March) on 105 apparently healthy subjects (aged 18–65 years) with suboptimal VitD status (25-OH-VitD 30–50 nmol/L). Subjects were randomized into four groups: three treatment groups receiving (A) capsules with starch-adsorbed VitD, (B) oil-based Valens VitD oral spray, or (C) water-based Valens VitD oral spray and a control group (D) which did not receive supplemental VitD. Two months of supplementation with cholecalciferol (1000 IU; 25 µg daily) resulted in significant increase in serum 25-OH-VitD levels in comparison with control group (pooled Δc 32.8 nmol/L; 95% CI: 23.0, 42.5, p < 0.0001). While we did not observe any significant differences between the tested formulations, the efficiency of supplementation was associated with body mass index and baseline serum 25-OH-VitD level. Higher supplementation efficiency was observed in participants with normal body weight (BMI < 25) and in those with more pronounced VitD insufficiency. We also determined that tested dosage was not sufficient to achieve recommended 25-OH-VitD levels in all subjects. View Full-Text
Keywords: vitamin D3; cholecalciferol; absorption; deficiency; supplementation; buccal spray; capsules vitamin D3; cholecalciferol; absorption; deficiency; supplementation; buccal spray; capsules
►▼ Show Figures 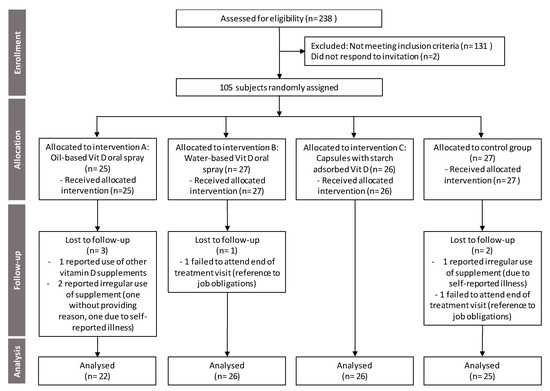