Effects of Ashwagandha (Withania somnifera) on VO2max: A Systematic Review and Meta-Analysis

:
Background: The current study intended to evaluate the feasibility of the application of continuous glucose monitoring to guarantee optimal intake of carbohydrate to maintain blood glucose levels during a 160-km ultramarathon race. Methods: Seven ultramarathon runners (four male and three female) took part in the study. The glucose profile was monitored continuously throughout the race, which was divided into 11 segments by timing gates. Running speed in each segment was standardized to the average of the top five finishers for each gender. Food and drink intake during the race were recorded and carbohydrate and energy intake were calculated. Results: Observed glucose levels ranged between 61.9–252.0 mg/dL. Average glucose concentration differed from the start to the end of the race (104 ± 15.0 to 164 ± 30.5 SD mg/dL). The total amount of carbohydrate intake during the race ranged from 0.27 to 1.14 g/kg/h. Glucose concentration positively correlated with running speeds in segments (P < 0.005). Energy and carbohydrate intake positively correlated with overall running speed (P < 0.01). Conclusion: The present study demonstrates that continuous glucose monitoring could be practical to guarantee optimal carbohydrate intake for each ultramarathon runner.
Keywords:
sports nutrition; continuous glucose monitoring; carbohydrate; trail running; Freestyle Libre

For the first time in human history, in 2019, Eliud Kipchoge ran the marathon distance in under two hours. Recent advances in the area of sports science significantly contributed to his success. In terms of exercise nutrition, it has been recommended to consume 90 g/h of carbohydrates for endurance exercise [1,2]. This amount has been suggested based on the maximum oxidation of carbohydrate as an energy substrate [3,4] and it is noted that the rate-limiting step to oxidizing this amount of carbohydrate is the gastrointestinal absorption process [1].
A longer distance marathon is known as an ultramarathon, and the popularity of these events has increased in recent years [5]. The total energy expenditure of a 160 km ultramarathon reaches about 13000 kcal [6]. Thus, nutritional strategies have to be considered for ultramarathon runners wanting to improve their race results, but also for those focusing primarily on finishing the event.
GI distress, which is frequently experienced by runners during all types of endurance exercise, makes the current carbohydrate intake recommendation difficult to achieve [7,8,9,10]. Several observation studies have shown that carbohydrate intake during ultramarathon races is lower than the current recommendation for carbohydrate intake. In addition to these statements and recommendations, the optimal nutritional strategies for ultramarathons have been proposed based on a baseline metabolic model [11]. It has been reported that only one study [12] achieved the carbohydrate amount suggested in the current recommendation, while others achieved less than the 60 g/h lower level of the recommendation. The lowest observed average was 31 g/h in slower runners [13].
A recently published position statement of the International Society of Sports Nutrition recommended the consumption of 150–400 kcal/h (carbohydrate, 30–50 g/h) [9]. Recent practical recommendations for ultramarathon events offered advice to consume tolerable carbohydrate intake quantities during exercise, which corresponded to 0.8–1.0 g/kg/h of carbohydrate [14]. These values were provided by comparing the race diet between fast and slow runners [13] or by comparing the carbohydrate intake of finishers and non-finishers [12].
Optimal nutrition results in a decreased risk of energy depletion, better performance [10], the prevention of acute cognitive decline, and improved athlete safety on ultramarathon courses with technical terrain or those requiring navigation [9]. However, it may prove difficult for the runner to execute the precise nutrition plan [11] and the carbohydrate requirement for ultramarathon racing varies greatly depending on the individual [9].
The aim of this study was to evaluate the feasibility of continuous glucose monitoring to improve the carbohydrate intake of ultrarunners using a continuous glucose monitoring system [15,16].

This observational study was designed to determine the minimum carbohydrate requirement to maintain blood glucose level and race speed during ultramarathons. All procedures were approved by the Ryukoku University Human Research Ethics Review Board (No. 2016-08-02). All research procedures complied with the code of ethics of the World Medical Association (Declaration of Helsinki). Written informed consent was obtained from all the participants before the commencement of the study.

Seven runners (4 male and 3 female) without injuries volunteered to participate in the study. All the runners had completed 2 to 3 races certified by the International Trail Running Association and the sum of finisher’s points exceeded 12 in the last 3 years, demonstrating their experience in running Ultramarathons. Participant characteristics are presented in Table 1.

The present study was conducted during the 2019 Ultra trail Mt. Fuji (https://www.ultratrailmtfuji.com/), held during the last week of April, around Mt. Fuji in Japan (ambient temperature range: 2.3–19.9 °C). The distance of the course covered 165 km and the total elevation was 7942 m. The course included trails, rocks, paths, grasslands, and pavements. The course was divided into 11 segments by 10 timing gates where each runner’s passing time was recorded electronically. Distances between each timing gate were 15 ± 5.4 SD km and varied from 7 to 28 km. Running time and speed between each timing gate were obtained from the official race web site. Running time between each timing gate was 1:58 ± 0:48 and 2:18 ± 0:52 h:m for the top 5 male and female finishers, respectively. All the runners had to run with backpacks to carry necessities, including food, and they could replenish food and fluid at each timing gate.

Blood glucose profile was monitored by a minimally invasive method known as flash glucose monitoring (FGM). Its details have been reported elsewhere [15,17,18]. Briefly, the FGM system (FreeStyle Libre; Abbott Diabetes Care, Alameda, CA) mechanically reads and continuously measures glucose concentration in the interstitial fluid collected from cells immediately below the skin and produces the corresponding ambulatory glucose profile. Subjects were asked to attach the device more than 1 day before the race. The FGM sensor was applied at the back of the upper arm and glucose concentrations were obtained every 15 min [17].
The glucose concentration of each runner during the race was standardized by subtracting the resting fasting glucose concentration of the runner and was expressed as an increase from resting fasting glucose level (Δglucose). The average, highest, lowest, and the difference between the highest and lowest levels of Δglucose in each segment were used as representative values in each segment (Figure 1).

Runners were asked to record their entire food and drink intake throughout the race. They reported the timing and volume of consumed food products and fluids based on pictures taken throughout the race. Food products and fluids consumed more than 60 min before the race start were not included in the calculation of nutritional intake. The energy and carbohydrate intake during the race were calculated based on the nutrition information provided by manufacturers. If data was not available, intakes were calculated based on the standard tables of food composition in Japan 2015 - (7th revised edition) [19]. The energy and carbohydrate intake were expressed relative to kg of pre-race body weight, per hour of running time. All foods were categorized with reference to previous research [20] as: sports drinks (isotonic and hypertonic formulas), gels, cola, other fluids (all other drinks consumed), sweets, fruits, bars, noodles, bread, rice products and other solids (all other products consumed).

The data reported in the text, tables, and figures are presented as means and standard deviations, unless otherwise specified. Data were processed and analyzed in GraphPad Prism for Mac (version 8.3.1, GraphPad Inc., San Diego, CA, USA). Pearson’s correlation coefficients were used to investigate the associations between running speed, glucose level, and carbohydrate intake. One-way ANOVA followed by Tukey’s post-hoc test were used to compare the differences between each runner’s blood glucose level. Results were considered significant when P < 0.05.

3.3. Relationship between Energy and Carbohydrate Intake and Running Speed

3.4. Relationship between the Amount of Carbohydrate Intake and Maintenance of Glucose Level during Race

In conclusion, the present study demonstrates that continuous glucose monitoring could be practical to guarantee optimal carbohydrate intake for each ultramarathon runner. Decreases in blood glucose during ultramarathons may be attributed to many factors, including sub-optimal carbohydrate intake. Additionally, individual characteristics such as the sex, age, or energy intake of each runner may have had a greater influence on blood glucose fluctuations across the race; thus, utilizing a continuous glucose monitor may help inform better race nutrition strategies.

This research was funded by RYUKOKU University and Nagatasangyo.co. (Hyogo, Japan).

We express our gratitude and deep appreciation to Gethin H. Evans, PhD in Manchester Metropolitan University for supporting academic writing. We thank Masumi Nakao, Yuko Koshiba, Shin Uehira and Yasuhito Okumura for recruiting participants. We also thank all the participants for their cooperation in the investigation.

The author declare that his study has been financed by RYUKOKU university and Nagatasangyo.co. (Hyogo, Japan). They did not participate in the experimental design, data collection, data analysis, interpretation of the data, writing of the manuscript, or in the decision to publish the results. 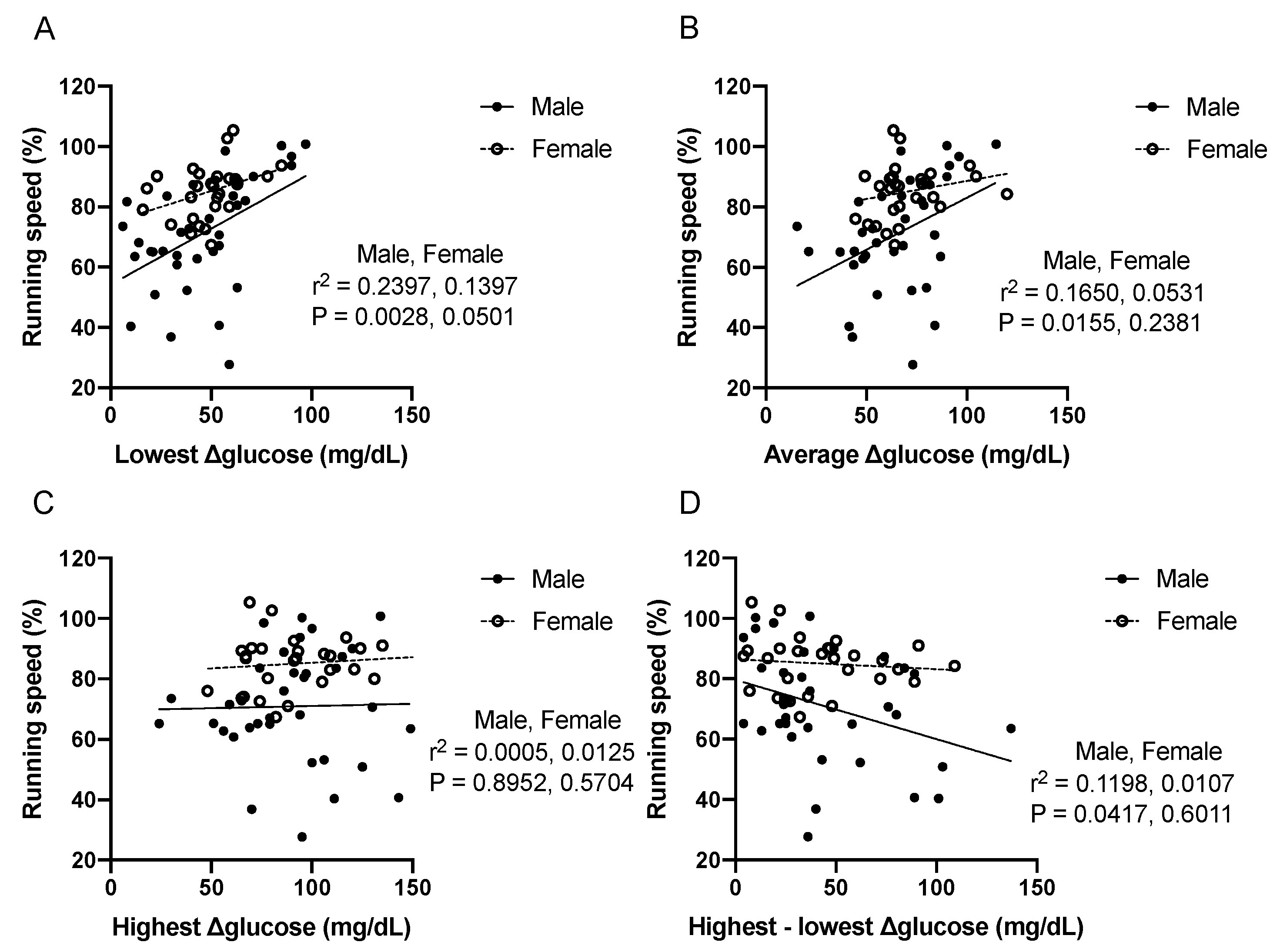 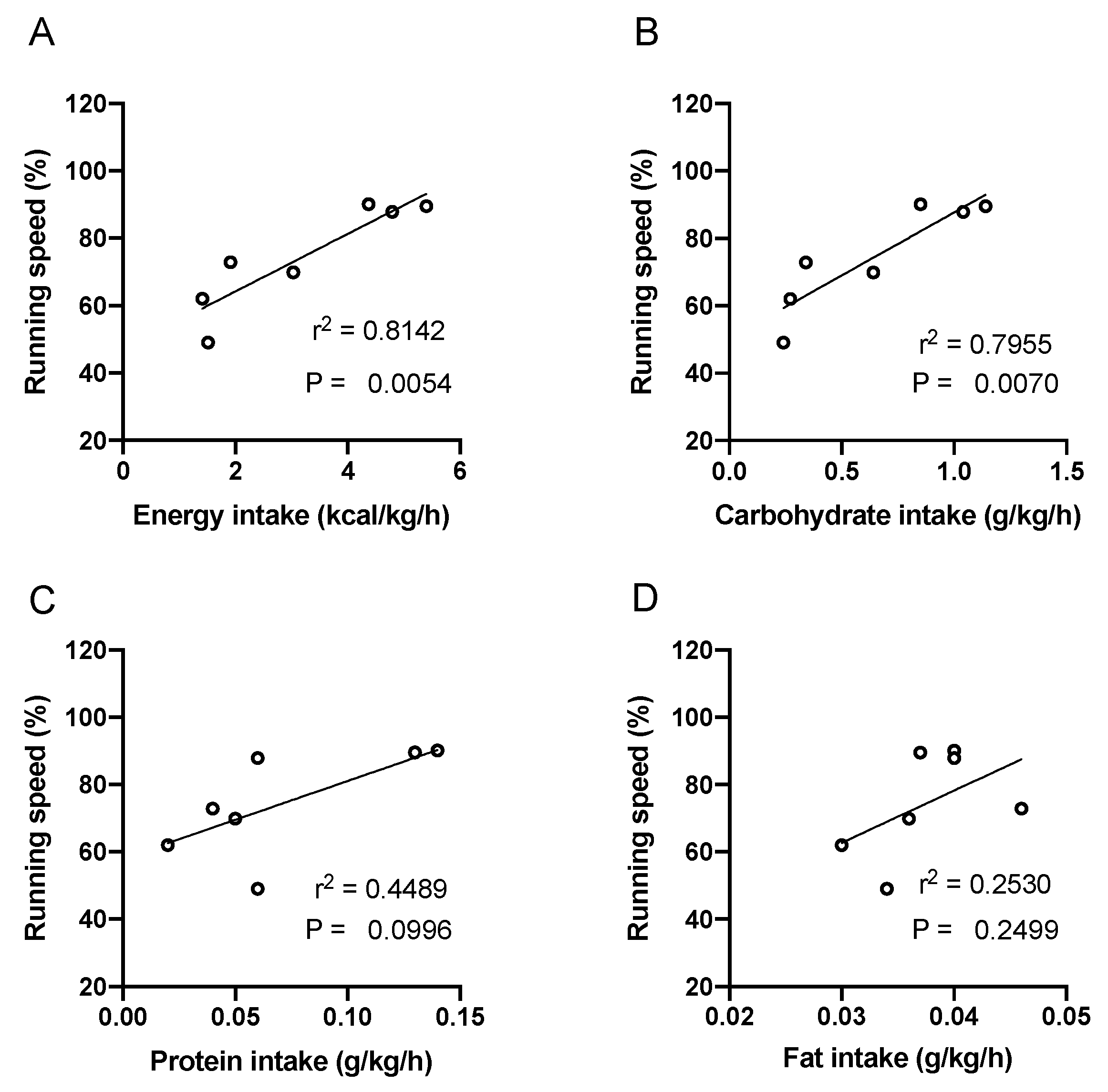 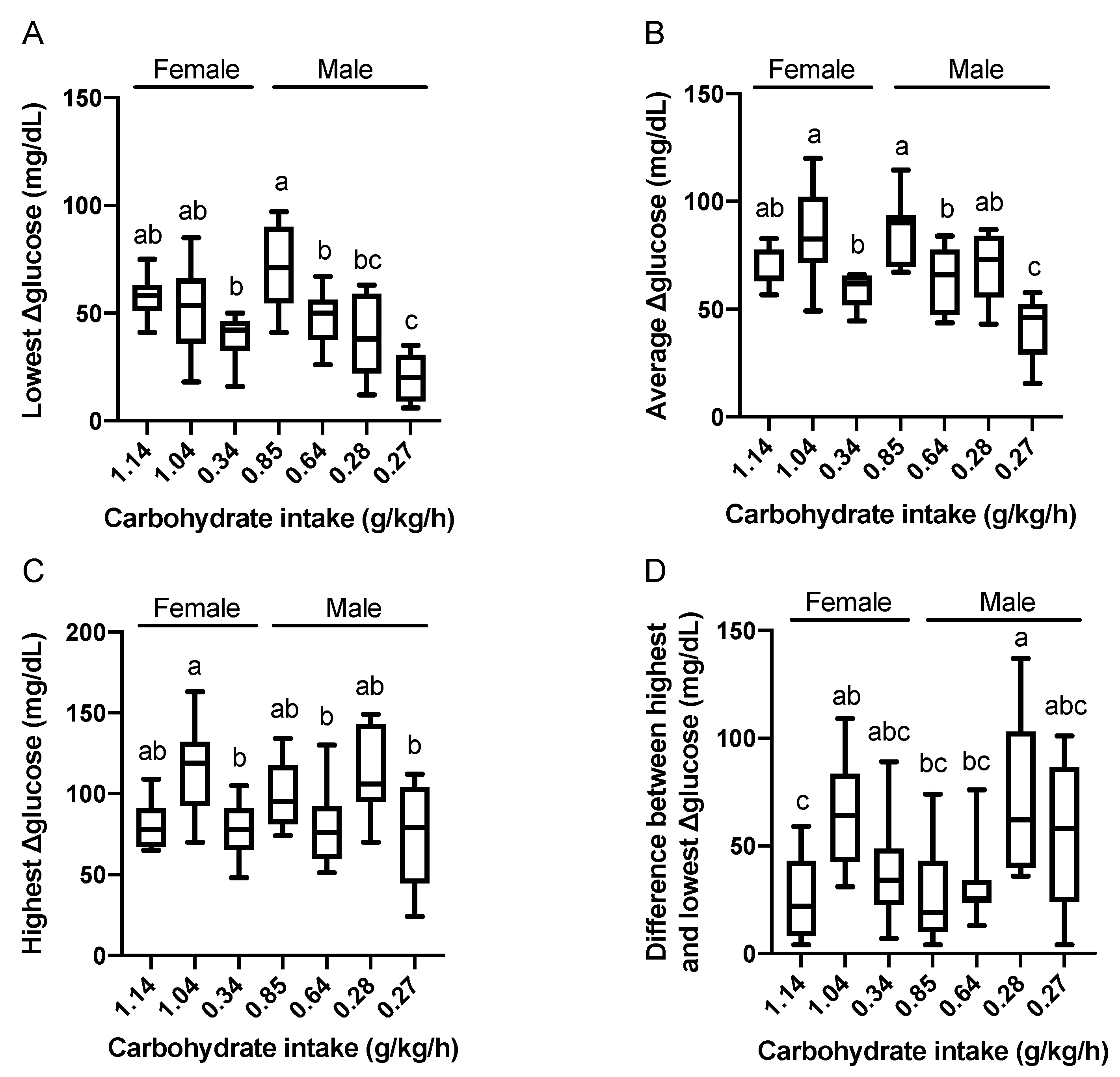