Caffeine’s ergogenic effects on exercise performance are generally explained by its ability to bind to adenosine receptors. ADORA2A is the gene that encodes A2A subtypes of adenosine receptors. It has been suggested that ADORA2A gene polymorphisms may be responsible for the inter-individual variations in the effects of caffeine on exercise performance. In the only study that explored the influence of variation in ADORA2A—in this case, a common polymorphism (rs5751876)—on the ergogenic effects of caffeine on exercise performance, C allele carriers were identified as “non-responders” to caffeine. To explore if C allele carriers are true “non-responders” to the ergogenic effects of caffeine, in this randomized, double-blind study, we examined the acute effects of caffeine ingestion among a sample consisting exclusively of ADORA2A C allele carriers. Twenty resistance-trained men identified as ADORA2A C allele carriers (CC/CT genotype) were tested on two occasions, following the ingestion of caffeine (3 mg/kg) and a placebo. Exercise performance was evaluated with movement velocity, power output, and muscle endurance during the bench press exercise, countermovement jump height, and power output during a Wingate test. Out of the 25 analyzed variables, caffeine was ergogenic in 21 (effect size range: 0.14 to 0.96). In conclusion, ADORA2A (rs5751876) C allele carriers exhibited ergogenic responses to caffeine ingestion, with the magnitude of improvements similar to what was previously reported in the literature among samples that were not genotype-specific. Therefore, individuals with the CT/CC genotype may still consider supplementing with caffeine for acute improvements in performance. View Full-Text
Keywords: caffeine; ergogenic aid; genetics; mean velocity caffeine; ergogenic aid; genetics; mean velocity
►▼ Show Figures 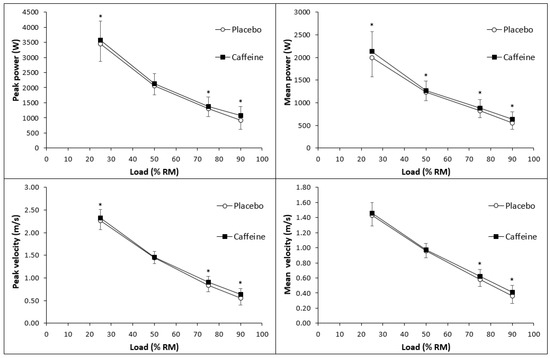