Social and Economic Factors and Malnutrition or the Risk of Malnutrition in the Elderly: A Systematic Review and Meta-Analysis of Observational Studies

Nowadays, the aging of the population is a consequence of the increase in life expectancy [1]. In Europe, between 2015 and 2050, the proportion of the world’s population over 60 years will nearly double from 12% to 22%, with a different distribution of gender and by country [2].
Aging can be associated with malnutrition, which is a public health problem characterized by a multifactorial physiological state [3,4]. Malnutrition is defined as an insufficient nutritional intake or absorption, which leads to a decrease in fat and muscle mass [5,6]. From the European Society for Clinical Nutrition and Metabolism (ESPEN) definition, malnutrition is diagnosed by a body mass index (BMI) of <18.5 kg/m2 or by meeting two of these three criteria: unintentional weight loss (>10% in an indefinite time period or >5% over the last three months) combined with either a low BMI (BMI of <20 kg/m2 if <70 years of age, or <22 kg/m2 if ≥70 years of age) or a low fat-free mass index (FFMI) score (FFMI of <15 and <17 kg/m2 in women and men, respectively) [7]. The overall prevalence of malnutrition in the elderly ranges from 1% to 24.6% [8]. In addition, 50% of the elderly in rehabilitation, 20% in residential care, and 40% in hospitals are malnourished [9]. As a result of population aging, the malnutrition prevalence is increasing, which is expected to reach 29.1% by 2080 [1].
However, before reaching the need of a malnutrition diagnosis, the use of validated tools could be used to determine malnutrition risk [6,7]. According to the ESPEN, the Mini Nutritional Assessment (MNA) is the most effective tool for screening and evaluating the risk of malnutrition in the elderly [6,10,11], composed of four areas related to anthropometry, clinical status (illness, medications, psychological stress, neuropsychological problems), dietary assessment, and self-perception about health and nutrition [10]. Other tools used to assess the risk of malnutrition include the Malnutrition Screening Tool (MUST) and the Nutrition Risk Screening (NRS), but these do not include the evaluation of important malnutrition risk factors such as functional, psychological, and cognitive parameters [10].
Consequently, a state of malnutrition can cause an impairment of quality of life, especially in the elderly, and can lead to increased healthcare costs and hospital stays [12].
Additionally, malnutrition is related to health, environmental, and social factors or determinants [6]. The elderly are more vulnerable to developing a worse nutritional status because of their lack of teeth, their loss of taste, or their poor mobility [5]; as a consequence, these factors can affect dietary intake. The social factors associated with malnutrition include lifestyle, loneliness, isolation, marital status, educational level, socioeconomic level, and place of residence [3,6]. Those that are single, widowed, or divorced are the most malnourished or at the most risk of malnutrition, especially the widowed [13]. The elderly with low educational levels have worse nutritional status due to the lack of cooking skills or insufficient knowledge to make healthy food choices [14]. Furthermore, there is a higher prevalence of malnutrition in people who live in rural areas [8]. Another determinant of malnutrition is income level, with a strong relationship between the levels of poverty and malnutrition in the elderly [13]. Thus, the social and economic determinants of malnutrition risk and/or malnutrition development should be analyzed to establish which determinants affect malnutrition and in which magnitude, as a basis for taking possible actions to reduce malnutrition in the elderly.
Thus, the hypothesis was that social and economic factors—such as low educational level, living alone, being single, widowed, or divorced, low income level, low previous (before 60 years old) or current occupational level, feeling of loneliness, living in rural areas, and low food expenditure—are related to malnutrition and malnutrition risk in the elderly.
The main objective of the present systematic review and meta-analysis was to assess and determine the magnitude of the relationship between socioeconomic factors and the malnutrition or malnutrition risk in the elderly ≥60 years old.

We performed a systematic review and meta-analysis of observational studies regarding malnutrition and malnutrition risk and their relation to socioeconomic factors in the elderly. This study was reported in accordance with the Preferred Reporting Items for Systematic Reviews and Meta-Analyses (PRISMA) (Table S1) and it was registered in PROSPERO International Prospective Register of Systematic Reviews (CRD42019137097).

The inclusion criteria were observational studies (case-control, prospective cohort, and cross-sectional studies), with the target population ≥60 years old, in which publications with data on malnutrition status, as well as social and economic variables, were published in English between January 2000 and December 2018.
The studies that did not meet all of the inclusion criteria were excluded. Additionally, studies that only included populations with illness or comorbidities were also excluded in order to focus on the general population, who was not selected taking into account a specific disease, to be able to generalize the results.

The search strategy of the studies that matched the inclusion criteria was carried out with the online platform Covidence (Covidence systematic review software, Veritas Health Innovation, Melbourne, Australia; available at www.covidence.org). Firstly, the studies were selected based on the title information. Subsequently, the abstracts of these selected studies were checked to see if they met or not the inclusion and exclusion criteria. Finally, those studies that met the inclusion criteria were full-text assessed. When the studies did not have all of the information necessary to be included in the present study, an email was sent to the authors of the publication requesting this information. The data extraction was carried out independently. Of the included studies, the following variables were collected: authors, year of study development, the country of implementation, the type of study, number of participants, target population’s age, gender, social factors (educational level, living alone or cohabit, marital status, feeling of loneliness, place of residence), economic factors (income level, occupational level, food expenditure), nutritional status screening tool, nutritional status (risk of malnutrition, malnutrition, and optimal nutritional status), and study quality. The previous or current occupational level was divided into low occupational levels (such as farmer, breeder, housewife, laborer, or hard manual or physical work) and high occupational levels (such as employee, businessman, worker, administration, or jobs involving higher intellectual effort).

2.4. Risk of Bias in Individual Studies

To carry out the meta-analysis, we used the Review Manager (RevMan) (computer program: version 5.3. Copenhagen: The Nordic Cochrane Centre, The Cochrane Collaboration, 2014). To select studies for the meta-analysis, it was taken into account whether they used the MNA as a nutritional evaluation tool (as this was the most used tool to evaluate the nutritional status in the elderly among the studies) and evaluated the socioeconomic variable with the same criteria. To include a study, information about the percentage or number of subjects with a risk of malnutrition or malnutrition-related to the socioeconomic variable was required. In contrast, studies that assessed all outcomes via multivariate analysis were excluded from the meta-analysis. Thus, we only performed the meta-analysis of each socioeconomic factor, in which at least 4 studies evaluated this factor and followed the inclusion criteria described previously. In addition, an analysis was performed in general (all variables in one) and by a subgroup of the same variables. To evaluate the heterogeneity of the studies, we used the I2 statistic. When the heterogeneity was over 85%, they were analyzed with randomized and non-fixed effects. A p-value of <0.05 was considered statistically significant.

3.1. Characteristics of the Included Studies in the Systematic Review

A total of 27 studies evaluated the relationship between living alone or cohabiting and the malnutrition or malnutrition risk, of which 13 showed statistically significant results [13,14,21,27,28,32,38,39,45,49,50,51,53] and 14 showed no significance [19,22,25,26,29,31,36,37,40,42,43,44,48,52] (Table S3). Of those 13 studies with statistically significant results, 11 showed that the elderly who lived alone had better malnutrition than the elderly who cohabited with other people—whether the spouse, sons, grandsons, or other family or friends [13,14,21,27,28,32,38,39,49,50,53]. Two of these evaluated the OR [32,38] and one of them also evaluated the β coefficient [32]. An increased risk of malnutrition was demonstrated in the elderly who lived alone [32,38], and it was observed that living alone increased malnutrition risk by 1.8 times [32]. In addition, the increased risk was found both in men and women who lived alone [38]. One study found that there was a higher significant percentage of people living with a spouse who had a better nutritional status [13]. However, two studies with significant results showed contrary results, establishing that of those with malnutrition, there was a higher percentage who lived together [45,51].

Of the total of 12 studies that evaluated the previous (<60 years old) or current occupational level, six obtained statistically significant results [14,28,34,45,46,53] and six did not [30,35,36,37,44,51] (Table S6). Of the studies with statistical significance, four showed that people with low current occupational levels or who were retired or unemployed had a higher percentage of malnutrition or malnutrition risk [14,28,34,45]. Two of these evaluated the OR [34,45] and one of them the β coefficient [34]. One study established that unemployed people had 22.2 times more risk of malnutrition [45]. In another study, the OR and the β coefficient revealed that administrative professions protect against malnutrition [34]. The OR of the other significant study showed that working (<60 years old or currently) as a farmer or animal breeder increased the risk of malnutrition [46]. Only one study obtained significant opposite results, expressing a high percentage of malnutrition among working elderly people [53].

Only one study evaluated the relation between food expenditure and malnutrition or malnutrition risk, and it did not show statistically significant results [41] (Table S9).

3.10. Quality of the Articles Included in the Systematic Review

Malnutrition and malnutrition risk could be reduced in the elderly by increasing their economic level, supporting those living alone or who are single, widowed, or divorced, and improving lifelong learning. 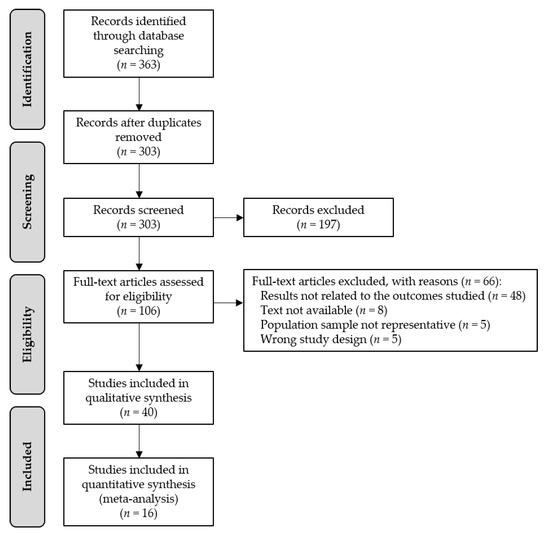 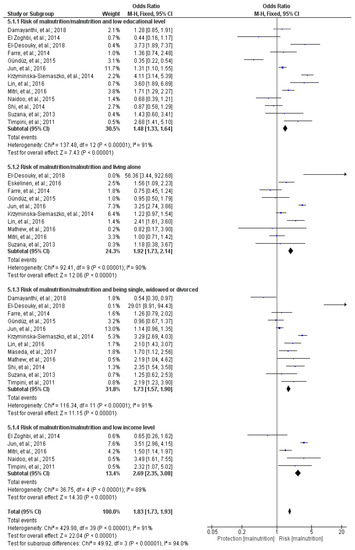