Lifestyle Patterns Begin in Early Childhood, Persist and Are Socioeconomically Patterned, Confirming the Importance of Early Life Interventions
Next Article in Special Issue

Maternal Lutein and Zeaxanthin Concentrations in Relation to Offspring Visual Acuity at 3 Years of Age: The GUSTO Study

Nutritional supplementation with antioxidants and vitamins is widely recommended in the treatment of vascular disorders affecting the retina, although there is insufficient evidence on its effectiveness. The vitamin-like compound coenzyme Q10 (CoQ10) is a nutritional supplement of current interest to treat neurodegenerative diseases. Here, we report a retrospective clinical case series study of 48 patients diagnosed with retinal vascular diseases, including non-arteritic ischemic optic neuropathy (NAION), retinal artery occlusion (RAO), and homonymous hemianopia or quadrantanopia following stroke, treated with oral supplementation with CoQ10 (100 mg per day) and vitamins. Patient follow-up was performed using the Humphrey field analyzer and 30-2 testing algorithm to determine the visual field index (VFI) and progression rates. All treated patients showed positive VFI progression rates per year: +11.5 ± 15% for NAION patients (n = 18), +22 ± 17% for RAO patients (n = 7), +9.3 ± 10.5% for hemianopia/quadrantanopia patients (n = 10), and +11 ± 21% for patients with other conditions (n = 13). The interruption of CoQ10 supplementation in one patient resulted in a pronounced decrease of the VFI, which was partially recovered when treatment was restored. This study supports the role of CoQ10 as a nutritional therapeutic agent for vascular diseases affecting the retina. Owing to decreased VFI after interruption of CoQ10, its beneficial effects may be reversible.
Keywords: Vascular diseases; retina; visual field defects; dietary supplementation; vitamins; coenzyme Q10 Vascular diseases; retina; visual field defects; dietary supplementation; vitamins; coenzyme Q10

Retinal dysfunctions caused by vascular disorders resulting in sudden visual loss are currently very prevalent. Vascular diseases can affect the blood flow to the optic nerve, the ophthalmic artery, and the retinal vein, or even produce retrochiasmal lesions of the visual pathway following cerebral insult. Among them, ischemic optic neuropathy (ION) is a spectrum of ocular diseases affecting the optic nerve owing to the interruption of blood flow supplied by the posterior ciliary arteries (anterior ION) or the pial capillary plexus (posterior ION) [1]. The most common anterior ION is the non-arteritic (NAION) form, presenting acute, unilateral, and painless loss of central and/or peripheral vision that can progress over several hours or days, mainly affecting patients older than 50 years [2]. On the other hand, retinal artery occlusion (RAO) is an embolic or thrombotic occlusion of either the central or branch ophthalmic artery (CRAO, BRAO), resulting in ischemia of the retina and visual loss. The retinal artery occlusion, mainly unilateral, may be transient and last for only a few seconds or minutes if the blockage breaks up and the flow restores, occurring mostly in male patients over 60 years [3,4,5]. Moreover, damage to the occipital, parietal, or temporal lobes caused by cerebral insults, including stroke, trauma, tumor, or brain surgery, results in severe visual field defects. Lesions affecting postchiasmal afferent nerve pathways generally produce homonymous visual field loss, which can be a hemianopia (one-half of an eye’s visual field) or quadrantanopia (one-fourth of an eye’s visual field) depending on the location of the lesion, with high impact upon the patient’s quality of life [6,7].
Vascular diseases affecting the eye are multifactorial in origin, with many risk factors contributing to their onset. Systemic risk factors include nocturnal arterial hypotension, arterial hypertension, diabetes mellitus, hyperlipidemia, ischemic heart disease, blood loss, atherosclerosis, sleep apnea syndrome, cardiovascular disorders, tobacco smoking, obesity, atrial fibrillation, hyperhomocysteinemia, varicose veins, and coagulation disorders (activated protein C resistance or factor V Leiden mutation), among others [3,8,9,10,11]. Ocular risk factors include elevated intraocular pressure, glaucoma, a small and crowded disc, or optic disc drusen that can influence the optic nerve head blood supply [9,12].
Current therapies are unable to predictably alter the natural history of these diseases, with limited efficacy to improve vision. During the acute event, ocular massage contributes to improve retinal perfusion, while lowering intraocular pressure, paracentesis, or hemodilution can increase the vascular supply. The use of vasodilators, thrombolytics, or a high concentration of oxygen is also recommended. The approach is mainly based on clinical evaluation and reduction of as many risk factors as possible to diminish the risk of any further episodes. However, no definitive standard treatment options exist due to insufficient high-quality evidence-based research [1,3,13].
Prescription of nutritional supplements, including vitamins, antioxidants, and omega-3 fatty acids, is widely recommended in the treatment of visual field defects of vascular origin [14,15]. However, there is a lack of standard pharmacological treatments or broadly accepted nutritional recommendations owing to the absence of evidence of effectiveness. One nutritional supplement of potential interest for the treatment of retinal dystrophies is coenzyme Q10 (CoQ10) [16,17,18,19,20]. CoQ10, a vitamin-like compound, is a physiological component of the electron transport chain, which maintains the mitochondrial membrane potential, supports adenosine triphosphate (ATP) synthesis, and functions as an antioxidant protecting neurosensorial cells [21].
In a seminal case report [22], we documented the clinical findings and management of a case of occipital lobe infarction with homonymous quadrantanopia in a patient treated with vitamins and coenzyme Q10, with significant visual field recovery 10 years after the cerebral insult. This documented improvement in the visual field of the treated patient, whose visual recovery was considered unlikely after more than 6 months post-injury, may be a sign of therapeutic efficacy. To address this observation, in the current work we present a retrospective case series study of vascular occlusion affecting the retina, including NAION, RAO, homonymous hemianopia or quadrantanopia, and optic nerve dystrophies, inter alia, treated with vitamins and CoQ10, observing remarkable improvements in the visual field, which supports the use of this coenzyme as a nutritional therapeutic agent for retinal diseases of vascular origin.

Cases of patients suffering vascular diseases affecting the retina and treated with vitamins and CoQ10 supplements were retrospectively reviewed. The study adheres to the tenets of the Declaration of Helsinki on Biomedical Research Involving Human Subjects, and was approved by the Clinical Research Ethics Committee (Reference 254/19) at Principality of Asturias (Oviedo, Spain). All subjects gave their informed consent for inclusion of their clinical case in the study. Specifically, 18 patients diagnosed with NAION, 10 patients with homonymous hemianopia (or quadrantanopia) caused by cerebral stroke, 7 patients with RAO, and 13 patients with other conditions, including optic nerve atrophy, cone dystrophy, retinitis pigmentosa, and retinal vascular occlusion, were recruited at the Ophthalmological Institute Fernández-Vega. A group of patients with other diseases was established to simplify the study, which included optic nerve atrophy, retinitis pigmentosa, retinal vascular occlusion, etc. Patients were diagnosed by indirect ophthalmoscopy, visual field analysis, determination of nerve fiber layer thickness and macula by optical coherence tomography (OCT), visual acuity, evoked potentials, examination of the papilla and anterior segment, fluorescein angiography (FA), best-corrected visual field acuity, and neurological study, including magnetic resonance imaging, when needed. No subjects involved in this study presented with other relevant ocular pathologies. Once each patient was diagnosed, systemic treatment with vitamins and antioxidants was prescribed, mainly consisting of the following: Active complex® Q10 Gold 100 mg (Pharma Nord, Vejle, Denmark), 1 tablet at lunch in all months, following manufacturer’s dosage guidelines; Hidroxil® (vitamins B12, B6, and B1; Almirall, Barcelona, Spain), 1 tablet at breakfast, lunch, and dinner in alternate months; Acfol (Italfarmaco, Cinisello Balsamo, Italy), 1 tablet at breakfast in alternate months; Cebrolux 800 (Bausch & Lomb, New York, NY, USA), 1 dose at lunch for 3 months and 1 resting month; Visan (Théa laboratoires, Clermont-Ferrand, France), 1 tablet at breakfast in the Hidroxil and Acfol resting month; and, for some patients, Adiro 100 or 300 (Bayer, Leverkusen, Germany), 1 tablet before meals. Specific treatments and dosages, depending on the main active ingredient, for each patient are included in Supplementary Table S1. Active complex® Q10 Gold 100 mg contains 100 mg of CoQ10 and 25 mg of vitamin C per tablet, while the active ingredient of Adiro 300 is acetylsalicylic acid (100 or 300 mg per tablet) and it is used for stroke (antiplatelet). The active ingredients of Hidroxil include vitamins B1 (250 mg thiamin), B6 (250 mg pyridoxine), and B12 (500 μg cyanocobalamin) (all amounts per tablet). The active ingredient in Acfol is folic acid (5 mg per tablet). Visan nutritional supplement contains trace elements (5 mg of zinc, 0.5 mg of copper, 27.5 μg of selenium, and 1 mg of manganese), vitamins (200 μg of A, 40 mg of C, 6 mg of E, 0.55 mg of B1, 0.7 mg of B2, 8 mg of B3, 0.7 mg of B6, and 1.25 μg of B12), 1.5 mg of lutein, 0.15 mg of zeaxanthin, 2.5 mg of glutathione, 25 mg of flavonoids, and low levels of coenzyme Q10 (2.5 mg) in each tablet. Cebrolux 800 dietary supplement contains 163 mg of choline and additionally 20 mg of vitamin C, 3.3 mg of vitamin E, 0.264 mg of vitamin A, and 0.4 mg of vitamin B6.
None of the patients received restorative training, optical aids, or compensatory training. Patient follow-up was carried out using the Humphrey field analyzer (HFA) instrument (Zeiss Iberia, Madrid, Spain) and 30-2 Swedish interactive threshold algorithm (SITA) standard. This algorithm uses a mathematical model to estimate threshold values for each point based on responses to stimuli. The visual field index (VFI), reflecting retinal ganglion cell loss and function, and the mean deviation (MD) in decibels (dB), representing retina sensibility, were obtained to evaluate the percentage of the remaining visual field of the right and left eyes. The program of the instrument provides the progression rate along the follow-up of each patient obtained by a linear regression analysis of VFI (or MD) with the corresponding slope and level of significance. Patient follow-up and examination were highly variable, depending on the severity of the disease. Upon initial examination and following treatment prescription, the patients were initially revised from 2–6 months to yearly follow-up. Comparisons between the initial and final values of VFI (%) and MD (db) of each group of patients were carried out using the Wilcoxon matched-pairs test (GraphPad InStat version 3.0; San Diego, CA, USA), with a p-value less than 0.05 considered statistically significant. Demographic and clinical characteristics of patients are reported in Table 1 and Supplementary Table S1, in which the disease, sex, affected eye, age at diagnosis and at initiation of CoQ10, and vitamin supplementation treatments are indicated, along with relevant ocular and systemic diseases. Clinical history of patients included in this study covers a range from 5 to 203 months, with average follow-up of 43 ± 41 months.

In conclusion, a case series study of patients diagnosed with retinal dysfunctions caused by vascular disorders demonstrated the therapeutic potential of CoQ10 in combination with vitamins, with important improvements in the visual field. However, oral CoQ10 treatment must be evaluated in randomized, double-blind, controlled, prospective clinical studies to support these findings, in which dosing accuracy, the duration of therapy, and the effect of CoQ10 alone or combined with vitamins should be addressed. The use of CoQ10 in clinical practice together with traditional treatments can lead to improved patient outcomes.

The authors acknowledge Fabiola Fernández Andrés for its technical support and inestimable help. 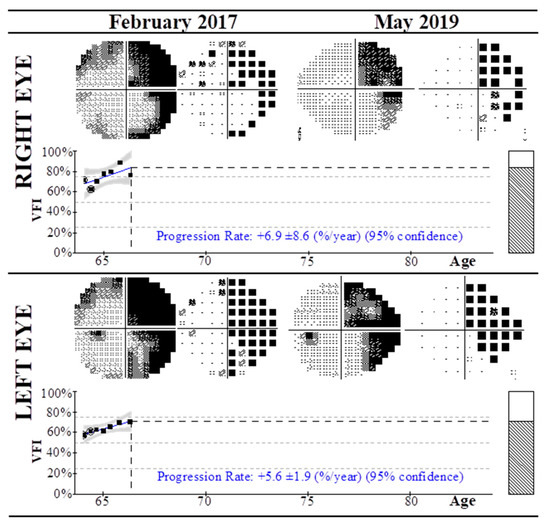 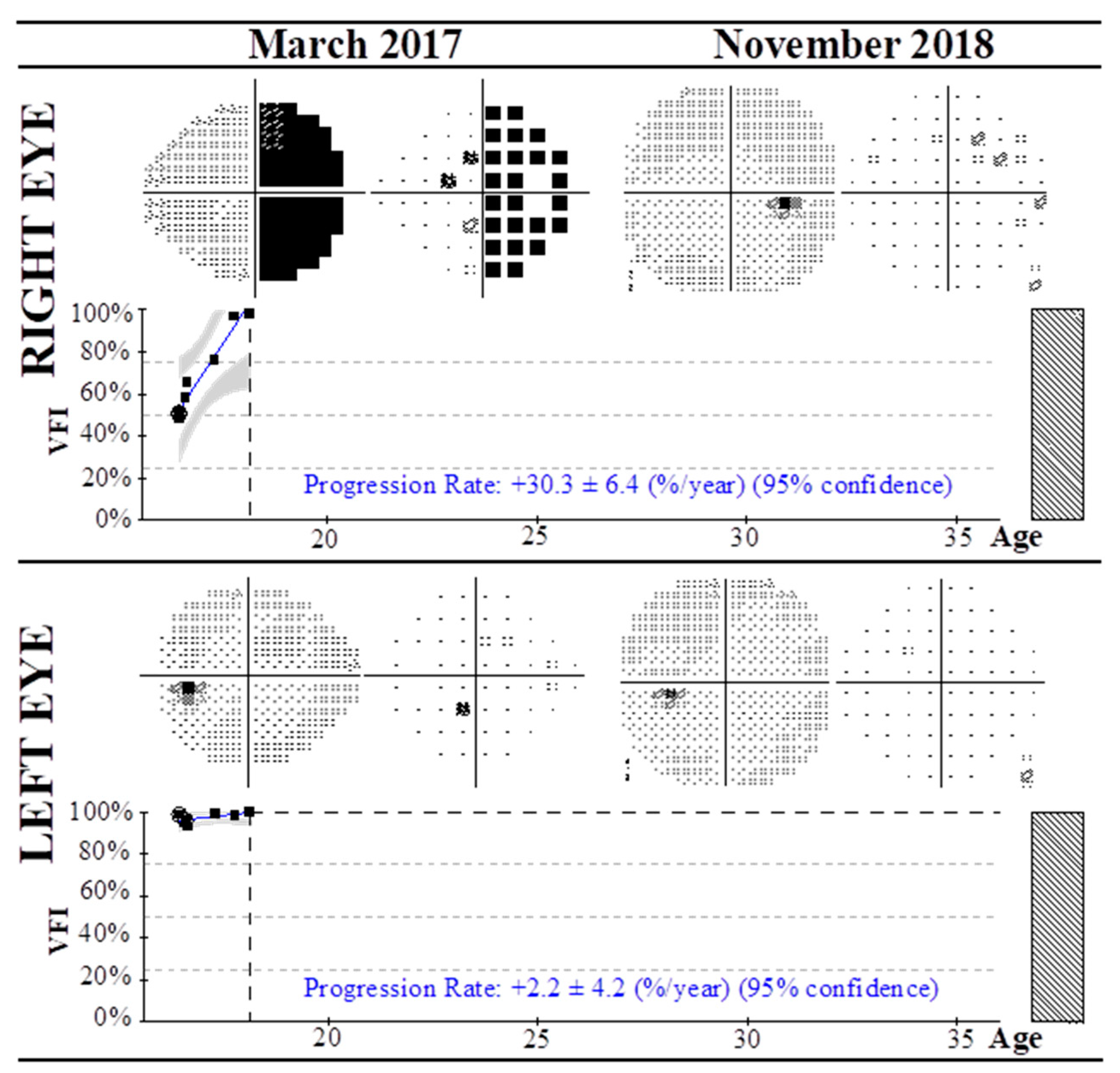 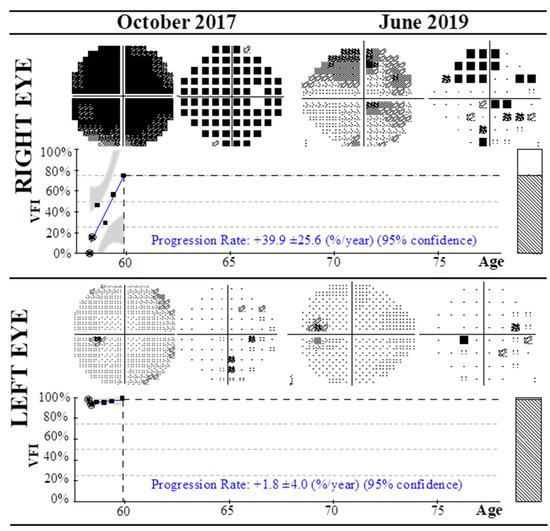 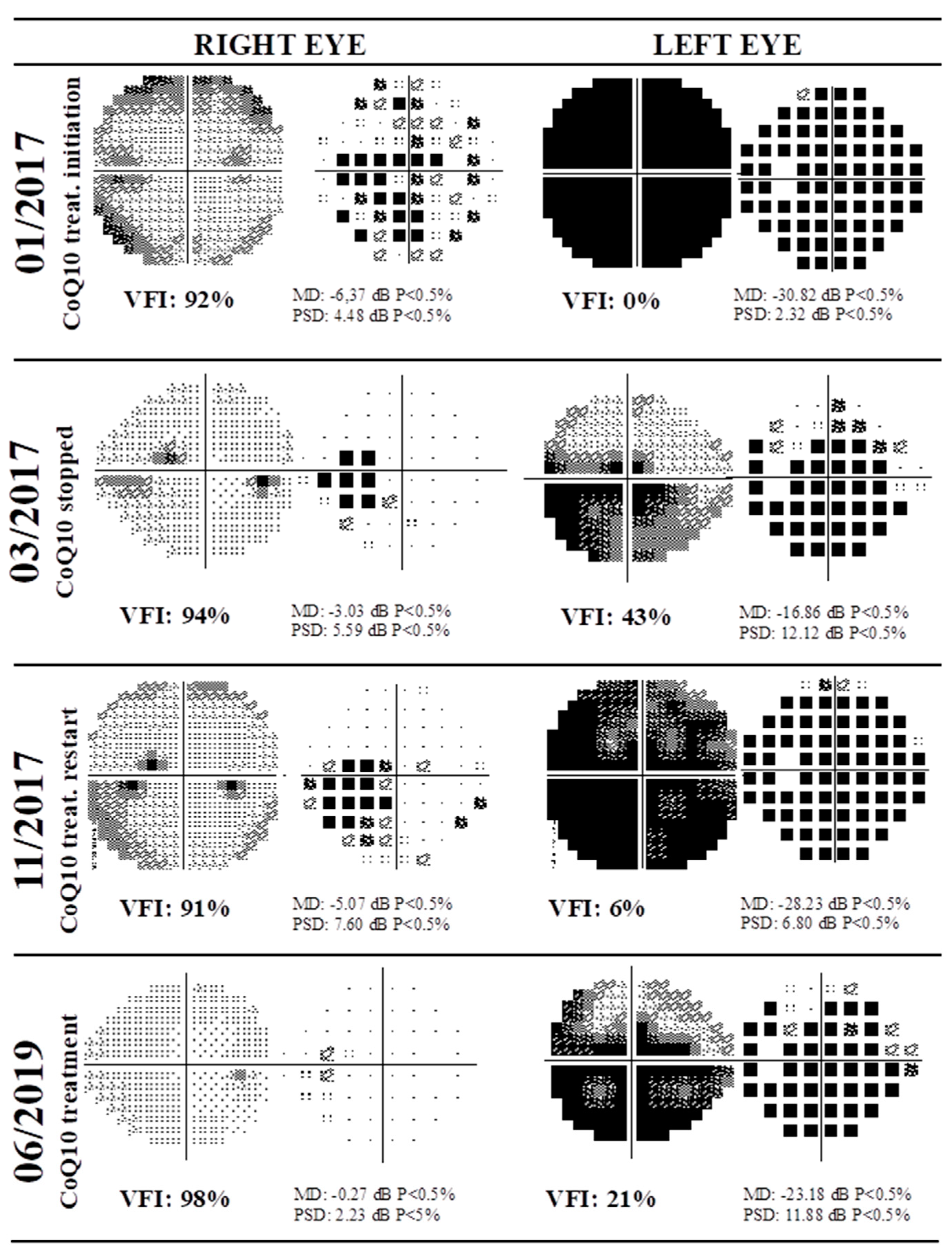