Direct-to-Consumer Nutrigenetics Testing: An Overview
Next Article in Special Issue

Energy, Nutrient and Food Intakes of Male Shift Workers Vary According to the Schedule Type but Not the Number of Nights Worked
Previous Article in Journal

We examined the effects of the timing of acute and consecutive epigallocatechin gallate (EGCG) and catechin-rich green tea ingestion on postprandial glucose in mice and human adults. In mouse experiments, we compared the effects of EGCG administration early (morning) and late (evening) in the active period on postprandial glucose. In human experiments, participants were randomly assigned to the morning-placebo (MP, n = 10), morning-green tea (MGT, n = 10), evening-placebo (EP, n = 9), and evening-green tea (EGT, n = 9) groups, and consumed either catechin-rich green tea or a placebo beverage for 1 week. At baseline and after 1 week, participants consumed their designated beverages with breakfast (MP and MGT) or supper (EP and EGT). Venous blood samples were collected in the fasted state and 30, 60, 120, and 180 min after each meal. Consecutive administration of EGCG in the evening, but not in the morning, reduced postprandial glucose at 30 (p = 0.006) and 60 (p = 0.037) min in the evening trials in mice. In humans, ingestion of catechin-rich green tea in the evening decreased postprandial glucose (three-factor analysis of variance, p < 0.05). Thus, catechin intake in the evening more effectively suppressed elevation of postprandial glucose. View Full-Text
Keywords: glucose metabolism; epigallocatechin gallate; green tea; insulin; timing glucose metabolism; epigallocatechin gallate; green tea; insulin; timing
►▼ Show Figures 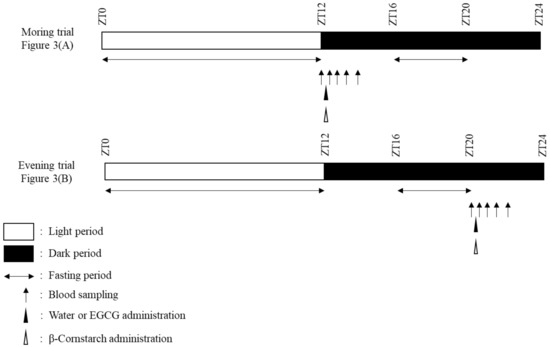