The Emerging Role of Vitamin C as a Treatment for Sepsis

Humans, unlike most other animals, have lost the ability to synthesise vitamin C (ascorbate) due to evolutionary conserved mutations in the gene encoding L-gulonolactone oxidase, which catalyses the final step in the biosynthetic pathway [1]. A diet severely lacking in vitamin C can result in the deficiency disease scurvy, which is characterised by the breakdown of connective tissue, causing localised bruising and bleeding, and ultimately leading to death [2,3]. Although scurvy is now rarely seen, the inadequate dietary intake of vitamin C is thought to be much more common and hypovitaminosis C (plasma ascorbate concentrations < 23 µmol/L) has been described in up to 15% of individuals [4,5]. These levels are associated with early symptoms of scurvy, such as fatigue and depression [6].
After ingestion, vitamin C is absorbed via the small intestine, released into the bloodstream and distributed to the tissues [7]. Accumulation into cells occurs via the sodium-dependent vitamin C transporters SVCT1 and SVCT2, which actively transport the vitamin against a concentration gradient to reach millimolar concentrations inside the cells [8,9]. It is well recognised that the SVCTs are vital for ascorbate distribution in the body [10,11]. Cells can also transport the oxidised form of vitamin C, dehydroascorbic acid (DHA) using the facilitative glucose transporters (GLUTs) in competition with glucose [12,13]. Once inside the cells, DHA is reduced to ascorbate [9,14]. GLUT-mediated DHA transport seems to be critical for ascorbate uptake into the erythrocytes. Mature erythrocytes do not contain SVCT proteins [15,16] and are thought to be reliant on the GLUTs, particularly GLUT1, for obtaining ascorbate from circulation [13,17,18]. Previous studies have shown that the ascorbate concentration in erythrocytes is similar to that of plasma [19,20,21], indicating that these cells do not concentrate ascorbate against the plasma concentration gradient.
Vitamin C status is typically determined by measuring the plasma concentrations of the vitamin [5,14]. However, the accuracy of this measurement is dependent on the use of fasting blood samples, as plasma vitamin C levels can fluctuate depending on recent dietary intake [15]. Providing fasting samples can be clinically challenging and inconvenient, and can also be difficult to incorporate into some study design scenarios. Thus, an accurate measurement of the vitamin C status in non-fasting individuals would be a useful tool. Given the observation that erythrocyte ascorbate levels are similar to plasma levels [19,20,21], we hypothesised that the intracellular erythrocyte ascorbate concentration may be a useful indicator of the steady-state plasma ascorbate concentration. In this study, we used both steady-state and short-term pharmacokinetic study designs to determine the kinetics of ascorbate uptake into erythrocytes and the relationship between erythrocyte levels and plasma ascorbate status.

Ethical approval was obtained from the New Zealand Southern Health and Disability Ethics Committee URA/06/12/083/AM02. Seven healthy participants were recruited from the University of Otago, Christchurch, with all participants providing written informed consent. Participants were eligible if they were non-smokers and had fasting plasma ascorbate concentrations of ≥50 µmol/L. The study design is shown in Figure 1. At recruitment, participants were asked to refrain from eating and drinking vitamin C-containing food for one week and were provided with an extensive list of foods to avoid, as well as a list of those that lacked vitamin C. After one week, participants resumed their normal diet and were given a 250 mg vitamin C tablet daily (Tishcon Corp., Westbury, NY, USA). Plasma and erythrocyte ascorbate concentrations were assessed at day 1 and every 2–3 days throughout the study period. All blood samples were obtained via venous puncture after an overnight fast, which included sampling prior to the ingestion of the daily vitamin C supplement in the second week of the study.

Ethical approval was obtained from the University of Otago Ethics Committee (H14/123) to conduct a short-term pharmacokinetic study, comparing the uptake of ascorbate into plasma and erythrocytes following dietary intake. Six healthy volunteers with fasting plasma ascorbate concentrations of ≥50 µmol/L were recruited from the University of Otago, Christchurch. Participants with healthy vitamin C levels (≥50 µmol/L) were chosen to avoid the possible preferential uptake of ascorbate by the tissues in individuals with a low vitamin C status, which could confound the comparison between plasma and erythrocyte ascorbate. All participants provided written informed consent. Following an overnight fast, a blood sample was obtained and the participants were supplemented with 200 mg of vitamin C tablets (Tishcon Corp., Westbury, NY, USA). Blood samples were collected every two hours for the next six hours (four samples in total, including the baseline). Following baseline blood collection, the participants were asked to avoid vitamin C-containing goods for the remaining six hours. The blood samples were processed for plasma and erythrocyte ascorbate analyses at the time of collection.

Blood was collected in K3-EDTA vacutainer tubes (Becton Dickinson, Auckland, New Zealand), immediately placed on ice, and processed within two hours of collection. All the following procedures were carried out on ice or at 4 °C. The blood was centrifuged at 3200× g for 15 min at 4 °C to separate the cells from the plasma. An aliquot of plasma was removed for ascorbate analysis and was acidified with an equal volume of ice-cold 0.54 mol/L perchloric acid containing 100 µmol/L diethylenetriaminepentaacetic acid (DTPA). The perchloric acid extracts were centrifuged and supernatants stored at −80 °C until HPLC analysis.

An analysis of erythrocyte ascorbate was undertaken using an adaptation of the method of Levine and co-workers [21]. Firstly, the remaining plasma and buffy coat layer were carefully removed from the centrifuged blood and discarded. The packed erythrocytes were washed once with a 10-fold excess of ice-cold PBS containing 500 µmol/L DTPA. Following centrifugation, 150 µL aliquots of packed erythrocytes were stored at −80 °C. On the day of the HPLC analysis, the erythrocytes were rapidly thawed and the cells lysed with the addition of a four times volume of ice-cold milliQ water containing 500 µmol/L DTPA, vortex mixing and incubation on ice for 2 min. A 200 µL aliquot was added to the top of a centrifugal filter unit (Amicon Ultra 0.5 mL, 10K Ultracel®; Millipore) and the lysate was centrifuged at 14,000 × g for 20 min at 4 °C to remove haemoglobin. An equal volume of ice-cold 0.54 mol/L perchloric acid containing 100 µmol/L DTPA was immediately added to the ultrafiltrate and the samples were vortexed and spun. The samples were incubated with tris (2-carboxyethyl) phosphine hydrochloride (TCEP) to reduce any DHA present in the sample, as described previously [22].

The vitamin C content of the plasma and erythrocyte samples was analysed by reverse-phase HPLC with coulometric electrochemical detection [22]. A standard curve of sodium ascorbate was freshly prepared each day in 77 mmol/L perchloric acid containing 100 µmol/L DTPA. Plasma and erythrocyte ascorbate are expressed as µmol/L.

This research was funded by the Canterbury Medical Research Foundation, grant number 15/03.

We would like to thank the participants of the two studies. AC is the recipient of a Health Research Council of New Zealand Sir Charles Hercus Health Research Fellowship. 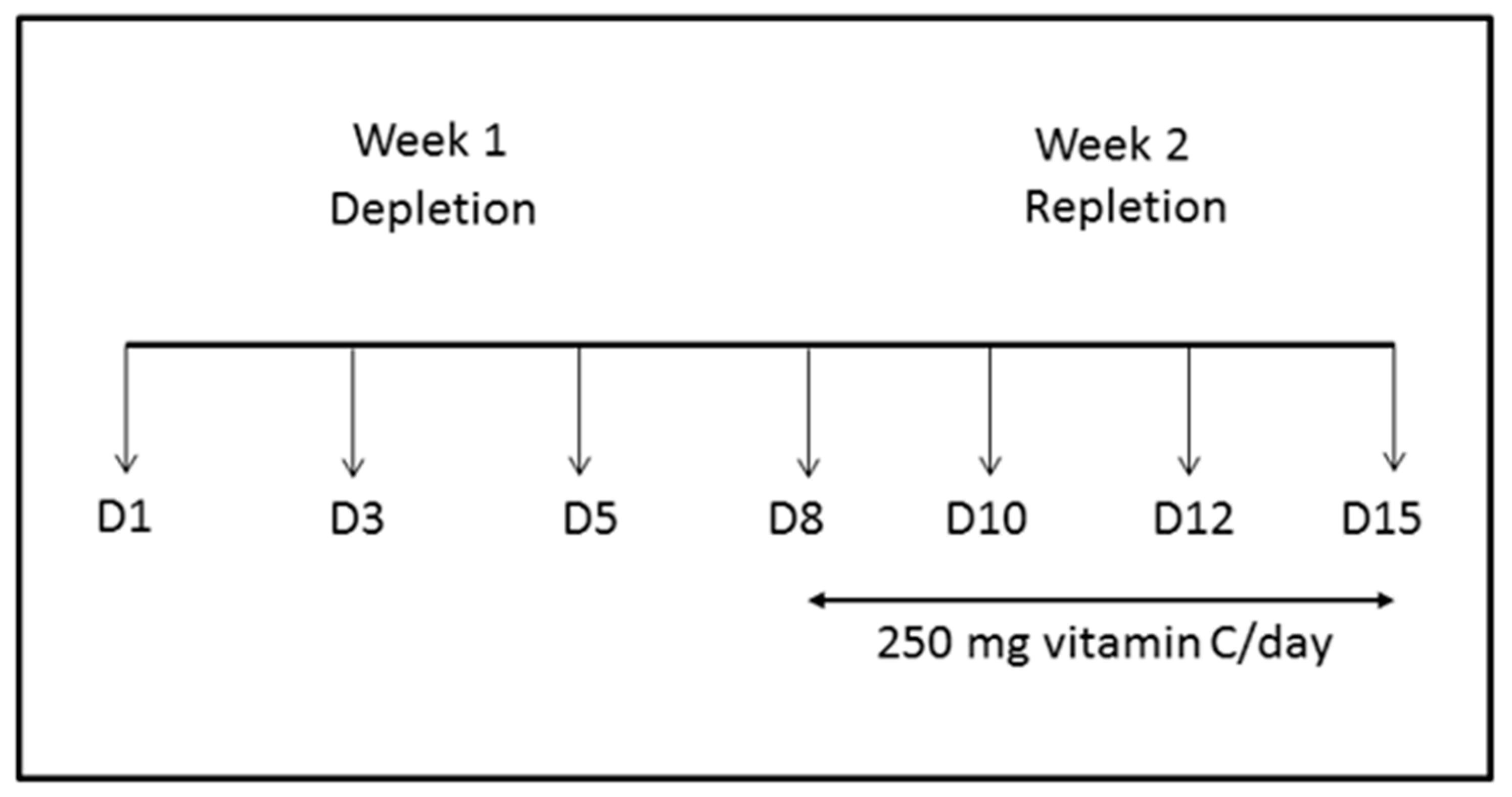 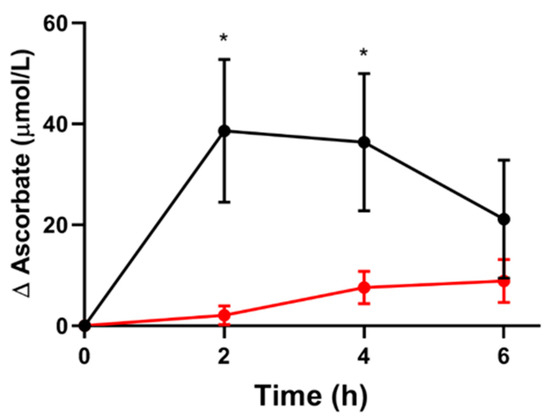 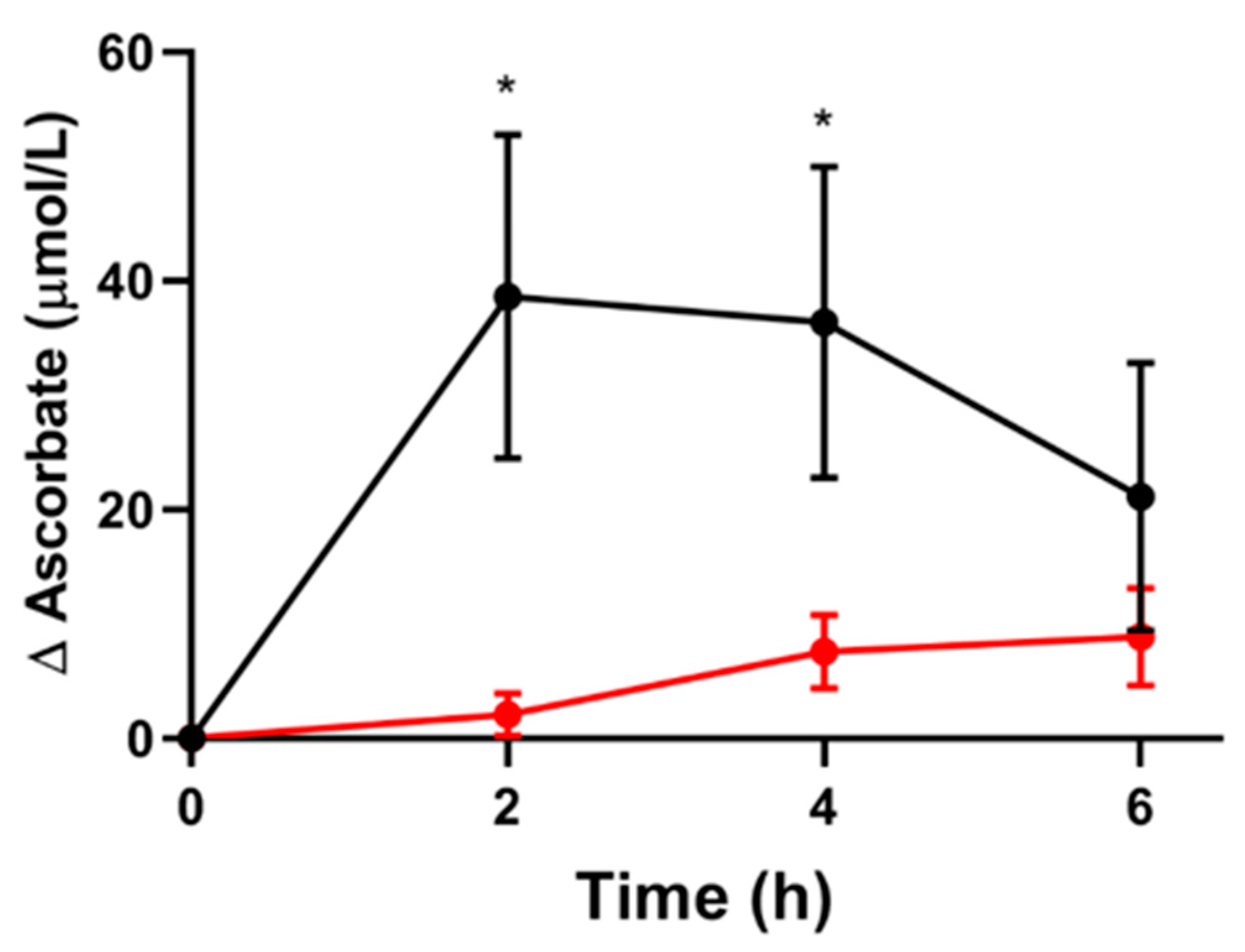