Possible Reduction of Cardiac Risk after Supplementation with Epigallocatechin Gallate and Increase of Ketone Bodies in the Blood in Patients with Multiple Sclerosis. A Pilot Study

Multiple sclerosis (MS) is a neurodegenerative disease that causes anthropometric changes characterised by functional disability, increase in fat mass, and decrease in lean mass. All these variables are related to a greater cardiac risk. The polyphenol epigallocatechin gallate (EGCG) and an increase in ketone bodies in the blood have been shown to have beneficial effects on anthropometric and biochemical variables related to cardiovascular activity. The aim of this study was to analyse the impact of the intervention with EGCG and ketone bodies on cardiac risk in MS patients. A population of 51 MS patients were randomly assigned to a control group and an intervention group (daily dose of 800 mg of EGCG and 60 mL of coconut oil). Both groups followed an isocaloric diet for 4 months. Levels of beta-hydroxybutyrate (BHB), albumin, paraoxonase 1 (PON1) and C-reactive protein (CRP) were measured in serum before and after the intervention, as well as determining functional ability, waist circumference, waist-to-hip ratio (WHR), waist-to-height ratio (WHtR), fat percentage and muscle percentage. After 4 months, in the intervention group there was a significant increase in BHB, PON1 and albumin, while CRP did not vary; a significant decrease in cardiac risk associated with a significant decline in WHR; as well as a significant increase in muscle percentage. By contrast, these changes were not observed in the control group. Finally, results from analysis of variance (ANOVA) revealed a significant time–condition interaction effect, observing that WHtR and fat mass decreased in the intervention group, while they increased in the control group. View Full-Text
Keywords: multiple sclerosis; cardiac risk; epigallocatechin gallate; ketone bodies multiple sclerosis; cardiac risk; epigallocatechin gallate; ketone bodies
►▼ Show Figures 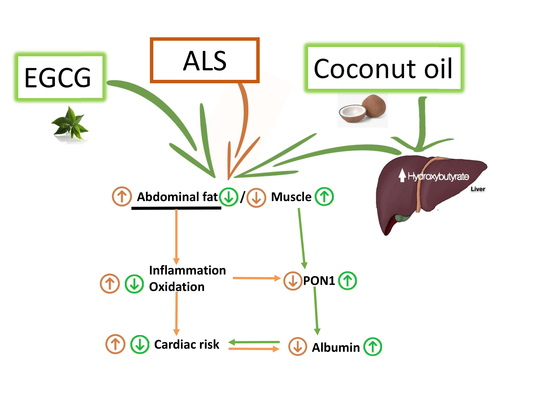