Therapeutic Potential of Gnetin C in Prostate Cancer: A Pre-Clinical Study
Next Article in Special Issue

Verbal Memory Performance in Depressed Children and Adolescents: Associations with EPA but Not DHA and Depression Severity

The findings reported in this present study were generated from data collected by the “The Omega-3-pMDD trial,” a multi-center placebo-controlled trial aiming to investigate the efficacy of omega-3 fatty acid supplementation in moderately to severely depressed children and adolescents aged 8–17 years. Two hundred and twenty patients across Switzerland will be recruited in order to investigate both the psychopathological and cognitive effects of nine months of n-3 PUFA supplementation. In the present study, we report cross-sectional findings from data collected prior to randomization to a treatment arm, with the exception of intellectual ability that was assessed six weeks post-randomization. Funding was received from the Swiss National Foundation and the private foundations that are listed later in the funding section. No industry funding was received. The clinical trial was registered on www.ClinicalTrials.gov, protocol no. NCT03167307. The clinical trial’s design paper has already been published [81]. The study was approved by the local ethics committee and was conducted in accordance with the ethical standards laid down in the 1964 Declaration of Helsinki and later amendments. All parents (or legal guardians) provided written informed consent and written or oral assent was obtained from the participating children before entering the study.

Participants were recruited from seven different in- and outpatient services across Switzerland. For inclusion, the patients had to meet the diagnostic criteria for MDD according to the Diagnostic and Statistical Manual of Mental Disorders (DSM)-IV [82] and had to have reported symptoms of at least moderate severity defined by a Children’s Depression Rating Scale [83] total score of ≥40 [84]. Patients who met the DSM-IV diagnostic criteria for an eating disorder within the last six months or the diagnostic criteria for a lifetime diagnosis of schizophrenia, bipolar affective disorder, or substance dependency were excluded from the trial. Mental retardation, pervasive development disorder, or pre-existing neurological or medical conditions that are likely to be responsible for depression symptoms constituted further exclusion criteria. Antidepressant treatment was allowed at study entry to avoid selection bias toward less severely depressed patients. Lastly, patients regularly supplementing n-3 PUFAs within the last six months (dosage limit set at 600 mg/day) or patients unable to follow the study procedures (e.g., due to a language barrier) were also excluded.
During the screening visit, the inclusion and exclusion criteria were assessed using the Kiddie Schedule for Affective Disorders and Schizophrenia (K-SADS-PL) [85] and the Children’s Depression Rating Scale revised (CDRS-R) [83]. Patients meeting all inclusion and no exclusion criteria were then included in the lead-in phase of the trial (7–14 days). During the lead-in phase, all participants received a placebo in a single blinded fashion and psychopathological, cognitive, and bloodwork baseline data were collected. Assessment of the inclusion and exclusion criteria was repeated at the end of this phase, after which patients were randomized to a treatment arm in a double-blind fashion. At the time of analysis, the sample consisted of 107 patients that met all of the inclusion and no exclusion criteria at screening and had analyzed PUFA blood sample data. The current article investigated this subsample in a cross-sectional manner using single cognitive and psychopathological assessments from the lead-in phase of the trial.

The CDRS-R is a semi-structured clinical interview assessing the severity of depression using 17 depression symptoms [83]. Patients and parents provide information on 14 of these symptoms which are then rated on a 7- or 5-point Likert scale, depending on the specific symptom. The interviewer then integrates this information and provides a final score for each symptom. Three further nonverbal symptoms are rated by the interviewer only (depressed facial affect, hypoactivity and listless speech). The final scores for each reported symptom, as well as the ratings on nonverbal symptoms are added up to obtain a final score for depression severity. Scores of 30–39 can be interpreted as mild, 40–59 as moderate, and ≥60 as severe symptoms of depression [84]. Validation studies on CDRS-R have reported good validity and reliability for depressed children and adolescents [86].

Venous blood samples were collected. For determination of erythrocyte fatty acid composition, blood was drawn into EDTA tubes, centrifuged, and then the plasma and buffy coat taken off; the erythrocytes were then frozen at −80 °C until analysis. The fatty acid composition of the erythrocytes was analyzed by gas chromatography at Omegametrix GmbH using previously described methods [87]. EPA and DHA statuses are given as a percentage of total fatty acids measured in RBCs.

High-sensitive CRP was measured in the plasma in an accredited medical laboratory using a commercial assay with a coefficient of variation of 1.3% at 3.6 mg/L, to be used as a marker for low-grade inflammation and as a stratification parameter for randomization. Values above 10 were excluded from analysis, as they could have indicated infection.

The BMI was calculated using weight (kg)/height (cm)2. BMI was not obtained in some cases because of missing measurement tools and devices.

Statistical Package for the Social Sciences (SPSS) software version 26 was used for all statistical analyses. Descriptive statistics are given in order to describe the study sample characteristics. Moderately and severely depressed patient groups were distinguished using a clinical cut-off of the CDRS-R total score (40–59 = moderate; ≥60 = severe) [84]. Three approximately equally sized groups were formed according to the data distribution of EPA and DHA statuses, because the patients’ n-3 PUFA statuses were all low when referring to the currently proposed ideal levels [94]. Hence, the formation of three groups would allow for the investigation of especially low status and rather normal values. Differences between moderately and severely depressed patients and differences between EPA and DHA status groups for the investigation of potential confounding variables were analyzed using chi-square tests, independent t-tests, and one-way ANOVAs, depending on the scale level of the variable investigated. Non-parametric Mann–Whitney U or Kruskal–Wallis tests were only used for strongly skewed data (>1, <(−1)), as in large sample sizes parametric tests should be robust against the violation of normality assumption [95].
In order to investigate differences in memory scores depending on depression severity (moderate vs. severe) and EPA and DHA statuses (low, intermediate, and high), multivariate analyses of covariance (MANCOVAs) were computed to evaluate the VLMT short-term, long-term, and interference parameters separately. Multivariate outliers were checked using Mahalanobis’ distances. Bonferroni correction was applied for the interpretation of between-subjects effects and pairwise comparisons. For digit span parameters, univariate analyses of covariance (ANCOVAs) were used for the forward and backward parameters separately.
Conservative results using Pillai’s Trace instead of Wilk’s Lambda are reported [96]. Pillai’s Trace values range from 0 to 1 with increasing values indicating a stronger contribution of the independent variable to the model. For all MANCOVAs, normal distribution within groups was investigated using Shapiro–Wilk tests and Q-Q plots where n ≤ 25. Box’s tests were used to evaluate the homogeneity of variance–covariance matrices. Levene’s tests were used to assess the equality of error variances, although the results should be robust against violation if none of the standard deviations are more than four times as large as the corresponding smallest standard deviation [97]. The homogeneity of the regression slopes was assessed for all covariates. Significance levels were set at p < 0.05.

At the time of analysis, the subsample of patients that met all inclusion and no exclusion criteria and where blood samples were available consisted of 107 patients. For one patient, the WISC digit span scores were missing due to the fact that the test had not been done with this individual. RIAS scores for seven patients were missing, because IQ testing was done six weeks post-randomization and these patients had not yet reached week six of the study.

3.2. Main Analysis—EPA Status and Depression Severity in Relation to Memory

3.3. Main Analysis—DHA Status and Depression Severity in Relation to Memory

This research was funded by the Swiss National Foundation, grant number 33IC30_166826. Furthermore, the Thalmann Foundation (University of Basel), the Ebnet Foundation, and the Vontobel Foundation supported additional PhD projects. The Research Department of Child and Adolescent Psychiatry, University Hospital of Psychiatry Zurich of the University of Zurich provided infrastructure and administrative staff support. Burgerstein, Antistress AG, and Rapperswil-Jona (SG, Switzerland) provided the study medication for the clinical trial with no restrictions regarding data analysis or publication rights. No additional industrial funding was provided throughout the study. 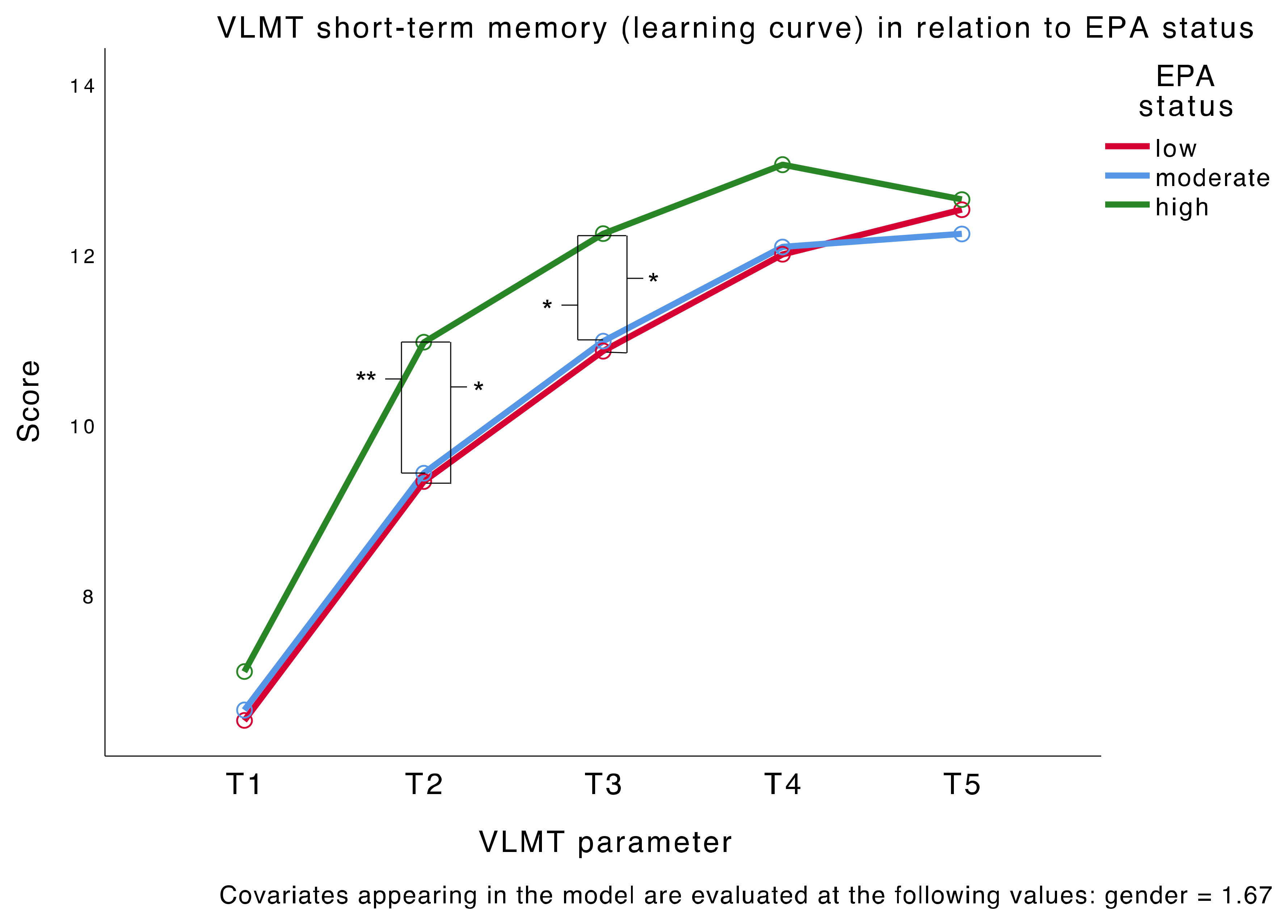