Kava as a Clinical Nutrient: Promises and Challenges

Kava beverages are typically prepared from the root of Piper methysticum. They have been consumed among Pacific Islanders for centuries. Kava extract preparations were once used as herbal drugs to treat anxiety in Europe. Kava is also marketed as a dietary supplement in the U.S. and is gaining popularity as a recreational drink in Western countries. Recent studies suggest that kava and its key phytochemicals have anti-inflammatory and anticancer effects, in addition to the well-documented neurological benefits. While its beneficial effects are widely recognized, rare hepatotoxicity had been associated with use of certain kava preparations, but there are no validations nor consistent mechanisms. Major challenges lie in the diversity of kava products and the lack of standardization, which has produced an unmet need for quality initiatives. This review aims to provide the scientific community and consumers, as well as regulatory agencies, with a broad overview on kava use and its related research. We first provide a historical background for its different uses and then discuss the current state of the research, including its chemical composition, possible mechanisms of action, and its therapeutic potential in treating inflammatory and neurological conditions, as well as cancer. We then discuss the challenges associated with kava use and research, focusing on the need for the detailed characterization of kava components and associated risks such as its reported hepatotoxicity. Lastly, given its growing popularity in clinical and recreational use, we emphasize the urgent need for quality control and quality assurance of kava products, pharmacokinetics, absorption, distribution, metabolism, excretion, and foundational pharmacology. These are essential in order to inform research into the molecular targets, cellular mechanisms, and creative use of early stage human clinical trials for designer kava modalities to inform and guide the design and execution of future randomized placebo controlled trials to maximize kava’s clinical efficacy and to minimize its risks. View Full-Text
Keywords: kava; kavalactone; cultivars; quality control; quality assurance; stress; anxiety; cancer; hepatotoxicity; inflammation kava; kavalactone; cultivars; quality control; quality assurance; stress; anxiety; cancer; hepatotoxicity; inflammation
►▼ Show Figures 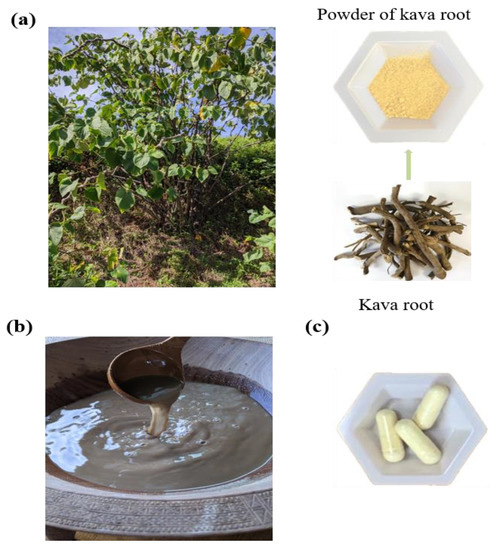