Studies investigating exercise-induced gut microbiota have reported that people who exercise regularly have a healthy gut microbial environment compared with sedentary individuals. In contrast, recent studies have shown that high protein intake without dietary fiber not only offsets the positive effect of exercise on gut microbiota but also significantly lowers the relative abundance of beneficial bacteria. In this study, to resolve this conundrum and find the root cause, we decided to narrow down subjects according to diet. Almost all of the studies had subjects on an ad libitum diet, however, we wanted subjects on a simplified diet. Bodybuilders who consumed an extremely high-protein/low-carbohydrate diet were randomly assigned to a probiotics intake group (n = 8) and a placebo group (n = 7) to find the intervention effect. Probiotics, comprising Lactobacillus acidophilus, L. casei, L. helveticus, and Bifidobacterium bifidum, were consumed for 60 days. As a result, supplement intake did not lead to a positive effect on the gut microbial environment or concentration of short-chain fatty acids (SCFAs). It has been shown that probiotic intake is not as effective as ergogenic aids for athletes such as bodybuilders with extreme dietary regimens, especially protein and dietary fiber. To clarify the influence of nutrition-related factors that affect the gut microbial environment, we divided the bodybuilders (n = 28) into groups according to their protein and dietary fiber intake and compared their gut microbial environment with that of sedentary male subjects (n = 15). Based on sedentary Korean recommended dietary allowance (KRDA), the bodybuilders′ intake of protein and dietary fiber was categorized into low, proper, and excessive groups, as follows: high-protein/restricted dietary fiber (n = 12), high-protein/adequate dietary fiber (n = 10), or adequate protein/restricted dietary fiber (n = 6). We found no significant differences in gut microbial diversity or beneficial bacteria between the high-protein/restricted dietary fiber and the healthy sedentary groups. However, when either protein or dietary fiber intake met the KRDA, gut microbial diversity and the relative abundance of beneficial bacteria showed significant differences to those of healthy sedentary subjects. These results suggest that the positive effect of exercise on gut microbiota is dependent on protein and dietary fiber intake. The results also suggest that the question of adequate nutrition should be addressed before supplementation with probiotics to derive complete benefits from the intervention. View Full-Text
Keywords: gut microbiota; athletes; bodybuilder; protein; dietary fiber; probiotic gut microbiota; athletes; bodybuilder; protein; dietary fiber; probiotic
►▼ Show Figures 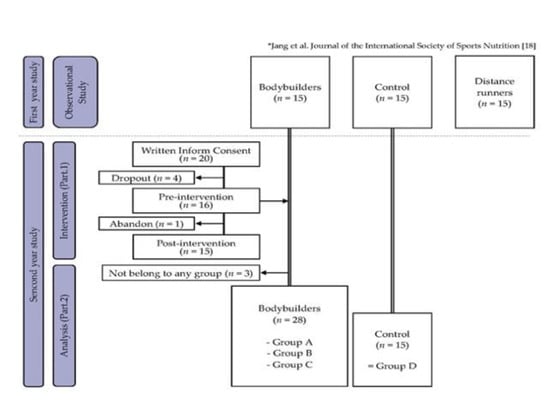