Development of a Food-Based Diet Quality Score from a Short FFQ and Associations with Obesity Measures, Eating Styles and Nutrient Intakes in Finnish Twins
Previous Article in Journal

The study assessed the potential for use of millets in mid-day school meal programs for better nutritional outcomes of children in a peri-urban region of Karnataka, India, where children conventionally consumed a fortified rice-based mid-day meal. For a three-month period, millet-based mid-day meals were fed to 1500 adolescent children at two schools, of which 136 were studied as the intervention group and were compared with 107 other children in two other schools that did not receive the intervention. The intervention design was equivalent to the parallel group, two-arm, superiority trial with a 1:1 allocation ratio. The end line allocation ratio was 1.27:1 due to attrition. It was found that there was statistically significant improvement in stunting (p = 0.000) and the body mass index (p = 0.003) in the intervention group and not in the control group (p = 0.351 and p = 0.511, respectively). The sensory evaluation revealed that all the millet-based menu items had high acceptability, with the highest scores for the following three items: finger millet idli, a steam cooked fermented savory cake; little and pearl millet bisi belle bath, a millet-lentil hot meal; and upma, a pearl and little millet-vegetable meal. These results suggest significant potential for millets to replace or supplement rice in school feeding programs for improved nutritional outcomes of children. View Full-Text
Keywords: school feeding program; mid-day meal; millets; sensory evaluation; undernutrition school feeding program; mid-day meal; millets; sensory evaluation; undernutrition
►▼ Show Figures 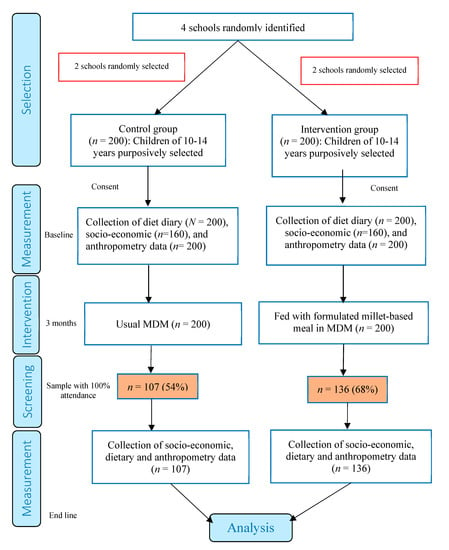