Extent of Food Processing and Risk of Prostate Cancer: The PROtEuS Study in Montreal, Canada
Previous Article in Journal

The worldwide difference in prostate cancer (PCa) incidence highlights an important role of lifestyle in PCa [1,2,3,4]. Dietary fatty acid (FA) intake is one dietary factor thought to impact PCa development. Interestingly, Inuit people have a very low incidence of PCa and pre-malignant lesion at autopsy, which may be attributed to their traditional diet rich in omega-3 FA (ω3) [5,6]. In addition, preclinical and clinical experimental studies support that high ω3 intake have protective effects against PCa, likely via their anti-inflammatory properties [7]. Animal studies showed that ω3, particularly long-chain ω3 (LCω3), suppress neoplastic transformation, angiogenesis, and tumor cell growth [8,9]. A prospective randomized trial with fish oil supplementation showed that LCω3 decrease PCa cell proliferation in men undergoing radical prostatectomy [10,11].
Epidemiological studies provide mixed results regarding associations between FA intake and PCa. Some studies showed that a high level of ω3 is inversely associated with PCa risk [12,13,14,15,16], while other studies demonstrated null [17,18,19,20,21] or positive associations [22,23,24]. These studies used various methods to evaluate FA intake, such as food frequency questionnaires (FFQ) and FA composition of plasma circulating lipids or of red blood cell (RBC) membranes. Most of the studies evaluating the association between ω3 and PCa were based on FFQ [12,13,14,15,19,23,25,26], while fewer studies were based on FA levels in plasma or in RBC membranes [16,18,20,21,22,24]. The FA composition of RBC is thought to be more reliable than plasma, as it reflects the last 3-month diet [27]. To our knowledge, only one previous study was based on FA levels in the prostate tissue [28]. In this cohort of 48 men with low-risk PCa, we measured the level of eicosapentaenoic acid (EPA), a LCω3 subtype, directly in prostatic tissue, and found that it was inversely associated with reclassification to high-grade disease. This association was not observed in RBC, suggesting that information bias may be present when considering only blood FA measures.
We undertook a validation study using the same methodology. We hypothesized that ω3 intake, and particularly LCω3 levels in the target prostate tissue, are inversely associated with high-grade PCa during active surveillance. The ω3 can be assessed through food intake, directly in circulating RBC or in target tissue such as prostate. In this study, we aimed at evaluating the associations between ω3 status assessed through different measurements and high-grade PCa, or grade reclassification, in men under active surveillance for a low-risk PCa.

This study is a cross-sectional study of 189 men recruited for a phase II randomized controlled trial. Men were recruited at the time of a low-risk PCa diagnosis for which active surveillance was elected. Low-risk PCa was defined as pathologically confirmed grade group 1, with < 6 positive biopsy cores out of 12, < 3 positive sextants, a clinical stage ≤ T2a, and a prostate-specific antigen (PSA) level < 15 ng/mL if prostate volume was >30 mL, or a PSA < 10ng/mL otherwise. Patients were excluded if they were taking a 5α-reductase inhibitor (5-ARI) drug, ω3 supplements, or if they had received radiotherapy or chemotherapy. The ongoing randomized trial assesses the effects on prostate tissue biomarkers of a dietary intervention versus dutasteride, a 5-ARI drug. The dietary intervention aims at increasing intake of LCω3 while decreasing ω6 FA and trans-fat intake.
The current cross-sectional study investigates how FA levels are associated with a high-grade PCa (grade group ≥ 2) at the first repeat biopsy, which was performed for randomization into the trial. A planned analysis of the first 48 patients, which amounted to about one-fourth of all patients recruited, has already been published [28]. We present here the data at baseline for the complete study population. From 189 men recruited for this study, 176 were eligible according to exclusion criteria listed in Figure 1. Men were included if information was available for FA intake obtained from FFQ, as well as FA levels in RBC and in prostate tissue (n = 157).
All patients provided written informed consent to participate in the study. The protocol is registered to clinicaltrials.gov (NCT01653925). The Centre Hospitalier Universiatire (CHU) de Québec-Université Laval ethics board approved the trial and the current study (2012-466).

FA levels in prostatic tissue and RBC: At first repeat biopsy session, additional prostate biopsy cores were taken in normal peripheral zones of the prostate presenting no prostate nodule, no ultrasound abnormality, and within a sextant region where the initial diagnostic biopsy cores were negative. These biopsy cores were dedicated to research and were immediately placed in cold Hank’s Balanced Salt Solution (HBSS; Invitrogen), frozen in dry ice, and stored at −80 °C.
Blood samples were collected into dipotassium ethylenediaminetetraacetic acid (K2EDTA)-containing Vacutainer tubes (Becton Dickinson) on the morning of the first repeat biopsy session, after an overnight fast, and immediately placed on ice. Within 1 h, plasma, buffy coat, and RBC were separated and isolated by centrifugation (2500 g, 15 min, 4 °C). Isolated fractions were stored at −80 °C.
FA profiles of normal prostate biopsies and RBC were determined by gas chromatography after extraction of total lipids, as previously described [28,31,32]. The reliability of repeat measurements of FA profiles in prostatic tissue by gas chromatography were previously demonstrated [28]. FA profiles in RBC is expressed as percentage of total FA, while in prostatic tissue as percentage of total FA as well as in milligrams of FA per gram of tissue.
FA intake: Patients were asked to complete a validated quantitative, web-based, self-administered FFQ online (web-FFQ) within a few days of the first repeat biopsy session to assess food intake over the last month. This web-FFQ contains standardized photographs of most food items, to help the participant quantify portion sizes, and was developed and validated specifically for Quebec citizens, who constitute the totality of our study population [33]. We also previously validated ability of this web-FFQ to assess ω3 intake specifically in PCa patients [34].

Descriptive statistics for low- and high-grade PCa groups at first repeat biopsy were compared using Wilcoxon test for continuous variables and using chi-squared test for categorical variables.
To estimate associations between FA status (assessed either in prostate tissue, RBC, or diet) and reclassification to high-grade PCa at first repeat biopsy, we categorized FA in tertiles. We fitted logistic regression models to estimate odds ratios (OR) and 95% confidence intervals (95% CI) of high-grade disease across FA tertiles, relative to the lowest tertile. Models were adjusted for potential confounding factors identified from the literature and that are potentially associated with PCa grade (p ≤ 0.30 in the multivariable analysis): waist circumference (continuous), PSA (continuous), alcohol (continuous), and physical activity (active, moderately active, and inactive) [36,37]. In addition, age (continuous) and total energy intake (continuous) were included in all models independently of p-values. We performed sensitivity analyzes by adjusting for body mass index (BMI) instead of waist circumference, for prostate volume, and also for education. These sensitivity analyses did not materially change the results. We also conducted a trend test (p-trend) by treating the median of tertiles as a continuous variable in multivariable regression models. In order to explore the possibility of residual confounding by using tertiles, we categorized more finely the prostate tissue EPA levels according to their observed distribution (Supplementary Figure S1), showing a group at the inferior limit of sensitivity, a middle group split in half, and high outliers (0; 0–0.2; 0.2–0.4; >0.4). We tested the dose-response effect by using the Mantel-Haenszel test, as is was not possible to normalize the distribution of prostate tissue EPA, precluding linear modeling. Finally, we calculated correlations between FA from web-FFQ, RBC membranes, and prostate tissue using partial Spearman correlations.
All statistical analyses were performed using SAS version 9.4. All tests were two-sided and p < 0.05 was considered as statistically significant. In order to evaluate the possibility of selection bias, we compared the characteristics of included and excluded participants.

We identified 157 men meeting inclusion criteria. At first repeat—or confirmation—biopsy, 39 men were reclassified to high-grade PCa and 118 had low-grade disease. Characteristics of the study population are summarized in Table 1. The mean age of patients was 61 years (± 7) and the mean PSA was 5.0 ng/mL (± 2.7). Of those men, 43% had a university degree and 38% had never smoked. BMI higher than 30 Kg/m2 was observed in 23% of participants. The characteristics of the included and excluded patients were similar, except for age (Supplementary Table S1).
Table 2 presents FA dietary intake, FA profiles in RBC, and in prostatic tissue at the first repeat biopsy session. The mean caloric intake was 2500 kcal (± 759). Participants had an average daily intake of ω3 and LCω3 of 2.17g (± 0.90) and 0.41g (± 0.35), respectively. The mean ω3/ω6 ratio from dietary intake was 0.15 (± 0.05) and was borderline higher in low-grade PCa group (p = 0.05). This difference was significantly reflected in prostate tissue (p < 0.01). Finally, LCω3 subtype EPA level in prostatic tissue was higher in low-grade PCa group (p = 0.01).
Associations between FA levels in prostate tissue and reclassification to high-grade PCa are presented in Table 3. FA levels in prostate tissue are associated with high-grade PCa. Compared to men in the lowest tertile of EPA level in prostatic tissue, men in the highest tertile had a decreased risk of high-grade PCa (OR 0.25; 95% CI 0.08-0.79; p-trend = 0.03). Weaker and stronger associations were observed, respectively, for the LCω3/ω6 ratio and ω3/ω6 ratio measured in prostatic tissue (OR 0.38; 95% CI 0.14–1.00; p-trend = 0.05, and OR 0.20; 95% CI 0.07–0.59; p-trend < 0.01, respectively). Table 4 shows the analysis with finer categories of EPA measured in prostate tissue (Supplementary Figure S1), in which we found a significant dose-response association between EPA and high-grade (p-trend < 0.01).
The enzymatic activity for long-chain (LC) FA metabolism in prostate tissue was estimated for ω3 and ω6. As shown in Table 5, we found that compared to high-grade, low-grade PCa group had a higher activity of ∆5-desaturase, which converts eicosatetraenoic acid (ETA) to EPA, as well as a lower activity of Elovl2 elongase, which converts EPA to docosapentaenoic acid (DPA), altogether suggesting an EPA bioaccumulation in prostate tissue of low-grade PCa (Supplementary Figure S2).
Associations between FA levels in RBC and reclassification to high-grade PCa are presented in Table 6. We observed a similar direction of effect of the LCω3/ω6 ratio measured in RBC than that measured in prostate tissue, but none of the RBC associations were significant (all p-trends > 0.20).
The associations between dietary FA intake and reclassification to high-grade PCa are presented in Table 7. Contrasting with FA levels in RBC, men in the highest tertile of LCω3 intake had a decreased risk of high-grade PCa (adjusted OR 0.30; 95% CI 0.11–0.83; p-trend = 0.02) compared to men in the lowest tertile of LCω3 intake. A similar protective effect was observed with a higher LCω3/ω6 ratio (OR 0.29; 95% CI 0.11–0.76; p-trend = 0.03).

The authors thank the participants of this study, who have contributed to a better understanding of prostate cancer dietary risk factors. They thank Claire Ménard and Hélène Hovington for their expertise, particularly helpful in the bio-specimen handling and processing, and data management. They also thank Line Berthiaume and Karine Greffard for the analysis of FA profiles. 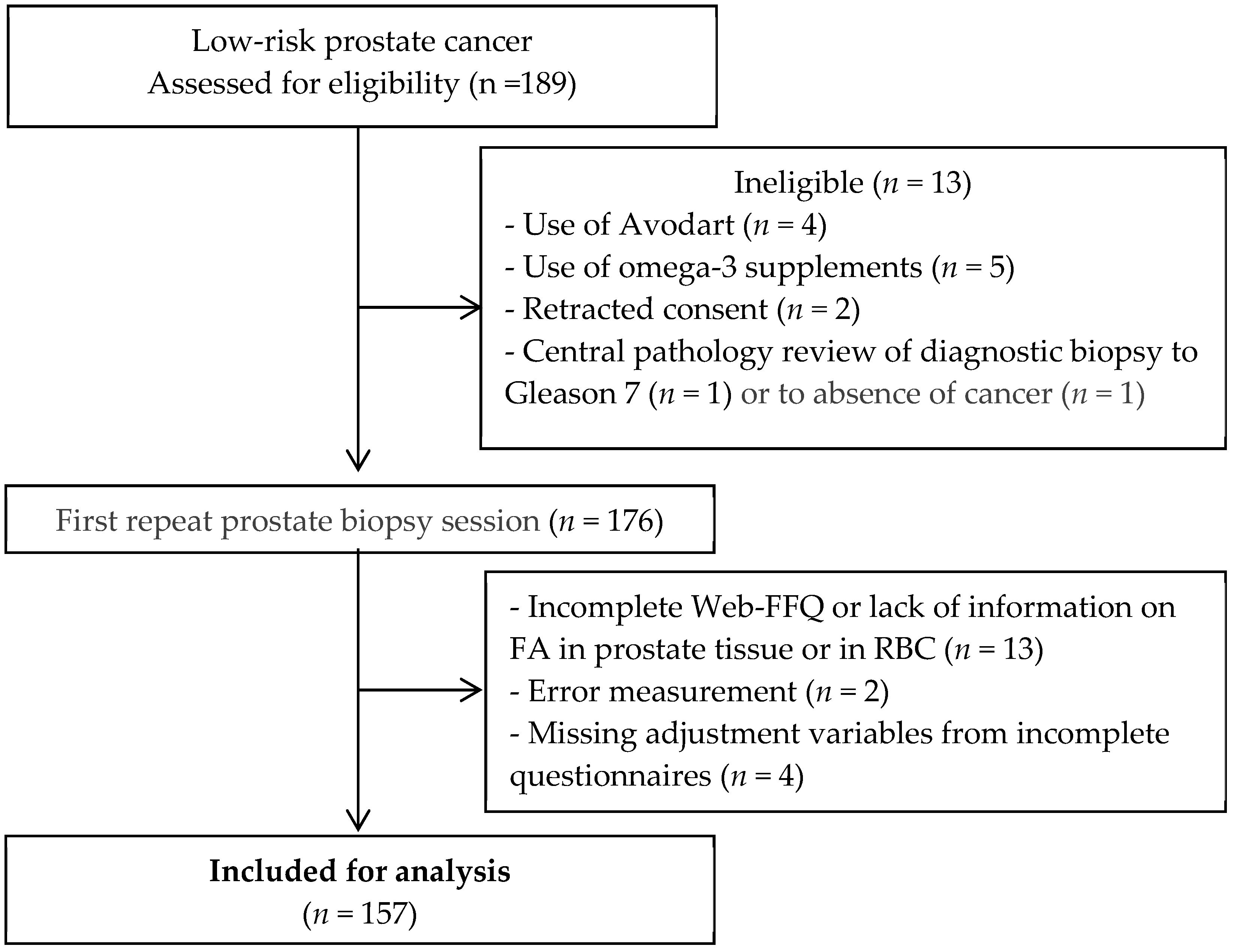