Potential Factors Influencing the Effects of Anthocyanins on Blood Pressure Regulation in Humans: A Review
Next Article in Special Issue

Protein supplementation might increase muscle anabolism and, if combined with exercise training, could also improve physical performance [1,2,3]. The anabolic response to protein intake can be affected not only by factors such as individual nutritional state, digestive/absorption capacity, or sensitivity of muscle anabolic pathways, but also by the source of protein [4]. In this regard, numerous protein sources have been investigated for their effect on muscle anabolism, including milk [5], eggs [6], soy [7], rice [8] or bovine colostrum [9]. Although supplements containing whey protein (WP) have received the most attention due to their high content in leucine and potential anabolic effect [10,11], beef protein (BP) has gained popularity in recent years [12].
Acute ingestion of BP can increase muscle protein synthesis in both young and older individuals [13,14,15], and these benefits seem to be maximized when combined with exercise training (particularly resistance training) [16]. There is thus biological rationale to support BP supplementation as a potentially effective strategy for improving lean body mass (LBM) and physical performance (notably, muscle strength). However, the evidence on the effectiveness of BP supplementation for increasing muscle mass or performance is mixed, with some studies reporting benefits compared to no protein supplementation [17,18] but others finding no such benefits [19,20]. Moreover, the effectiveness of BP for improving body composition or performance compared to WP remains unclear [18,19,21,22].
On the other hand, owing to its high content in heme iron, BP supplementation could also increase total iron intake and thus theoretically benefit hematological parameters, and indeed some benefits have been reported [20,22]. However, to our knowledge, there is not yet meta-analytical evidence on the potential benefits of BP supplementation.
Given the purported benefits of BP supplementation on body composition and performance, and the lack of consensus on its actual effectiveness, the main aim of this systematic review and meta-analysis was to compare the effects of BP, WP or no protein supplementation (NP) combined with exercise training on body composition and exercise performance. Changes in nutritional intake and hematological parameters were also analyzed as secondary endpoints.

The conduct and reporting of the current systematic review and meta-analysis conform to the Preferred Reporting Items for Systematic Reviews and Meta-Analyses (PRISMA) [23].

Relevant articles were identified by title and abstract in the electronic databases MEDLINE, Web of Science and SportDiscus (since inception to 5 May 2019) using the following search strategy: (beef OR meat) AND (supplement*) AND (athlet* OR train* OR “physical activity” OR exercise). The electronic search was supplemented by a manual review of reference lists from relevant publications and reviews to find additional publications on the subject. Gray literature (abstracts, conference proceedings or editorials) and reviews were excluded.

Studies were eligible for inclusion if they met each of the following criteria: (a) analyzed the effect of BP supplementation on at least one endpoint related to body composition or exercise performance; (b) duration of the exercise training + supplementation intervention ≥4 weeks; (c) used a randomized controlled trial design that included one group performing exercise training in combination with BP supplementation and 1+ groups performing the same exercise program as those receiving BP, but with WP or NP. Case studies were excluded, as well as those in which BP was combined with WP or other protein/‘anabolic’ supplements (e.g., creatine).
Two reviewers (P.L.V. and F.M.) independently extracted the following data from each study: number of participants within each group, participants’ characteristics, exercise and nutritional intervention’s characteristics, endpoints, measurement methods and results. Disagreements were resolved through discussion with a third reviewer (J.S.M.).
Endpoints data were registered as mean and standard deviation (SD). When the standard error of the mean (SEM) but not the SD was available, the latter was calculated from the square root of the sample size multiplied by the SEM. If data were provided as a figure, we used a specific software (WebPlotDigitalizer 4.2, San Francisco, CA, USA) for data extraction. We contacted the authors when necessary to request additional information. In this regard, the authors of two studies [17,19] provided us with the required specific data upon request. Fat-free mass was taken as a surrogate of LBM if the latter was not reported.

We performed a meta-analysis when a minimum of three studies compared the effects (pre- and post-intervention data) of BP vs. WP or NP for a given endpoint. The pooled standardized mean difference (SMD) between interventions (post- minus pre-intervention data) and 95% confidence interval (CI) were computed using a random effects model. A conservative Pearson’ r value of 0.7 was used for the computation of the within-group SD [25], and a sensitivity analysis (r = 0.2, 0.5 or 0.9) was then performed when a significant result was found. Begg’s test was used to determine the presence of publication bias. We considered that the analysis of an outcome was at risk of bias when Begg’s test was significant (i.e., p < 0.05). The Q and I2 statistics were used to assess heterogeneity between studies. I2 values of 25, 50, and 75% were considered reflective of low, moderate, and large heterogeneity, respectively.
All statistical analyses were performed using the statistical software package Comprehensive Meta-analyis 2.0 (Biostat; Englewood, NJ, USA) setting the level of significance at 0.05.

The risk of bias in the included studies was overall low (Figure 2). Three of seven studies [18,20,26] failed to perform/report an appropriate random sequence generation or allocation concealment. Three studies (where BP was provided as lean beef) were at a high risk of performance bias because participants were not blinded to group allocation [17,20,26].

Five studies [18,19,20,21,26] analyzed young male and female active/trained subjects whose age ranged between ~18 and 30 years, one [22] analyzed master male athletes (35 to 60 years), and another one [17] assessed women aged 60 to 90 years.
The duration of the interventions ranged from 8 to 16 weeks. BP was supplied as isolated BP (powder form) in four studies [18,19,21,22] or as a lean beef supplement in a remainder of studies [17,20,26]. The amount of protein was specified in all but one study [20], and ranged from 16.4 to 46 g/day. BP was compared with NP in all studies, and with WP in four of them [18,19,21,22]. The nutritional intervention was combined with a resistance (‘strength’) exercise training program (2 to 3 sessions/ week) in five studies [17,18,19,21,26] or with aerobic exercise training (four to six sessions/week) in one study [22]. One study [20] only reported that participants were cross-country runners who maintained their typical usual exercise regime during the intervention.

This systematic review and meta-analysis of randomized controlled trials showed no mid/long-term (≥4 weeks) differences between BP and WP on total daily protein intake or body composition (LBM, fat mass), and thus both protein sources might be similarly effective to promote increases in LBM. However, BP resulted in a greater total daily protein intake than NP, and our results suggest that BP might represent an effective strategy for increasing LBM and lower-limb muscle strength. However, these and other potential benefits (including preliminary data on heme iron intake and ferritin levels) should be confirmed in future studies. 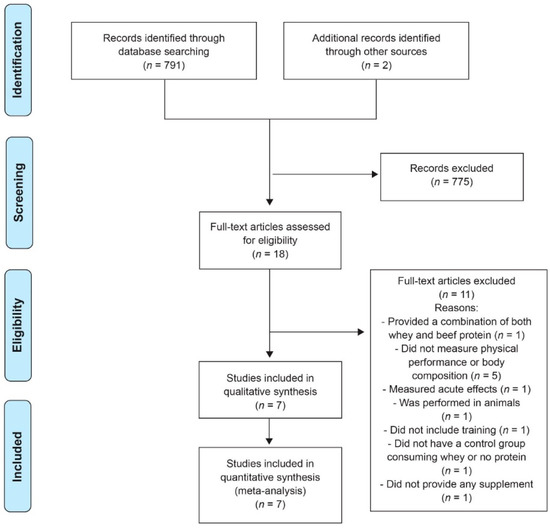 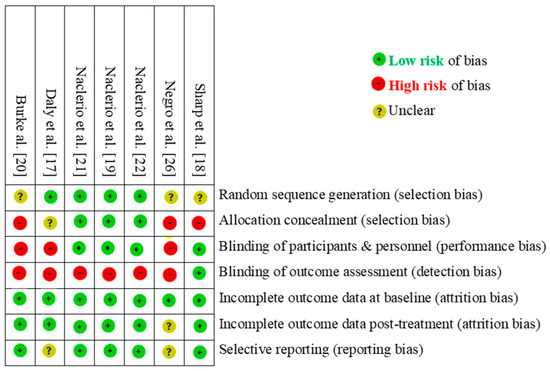 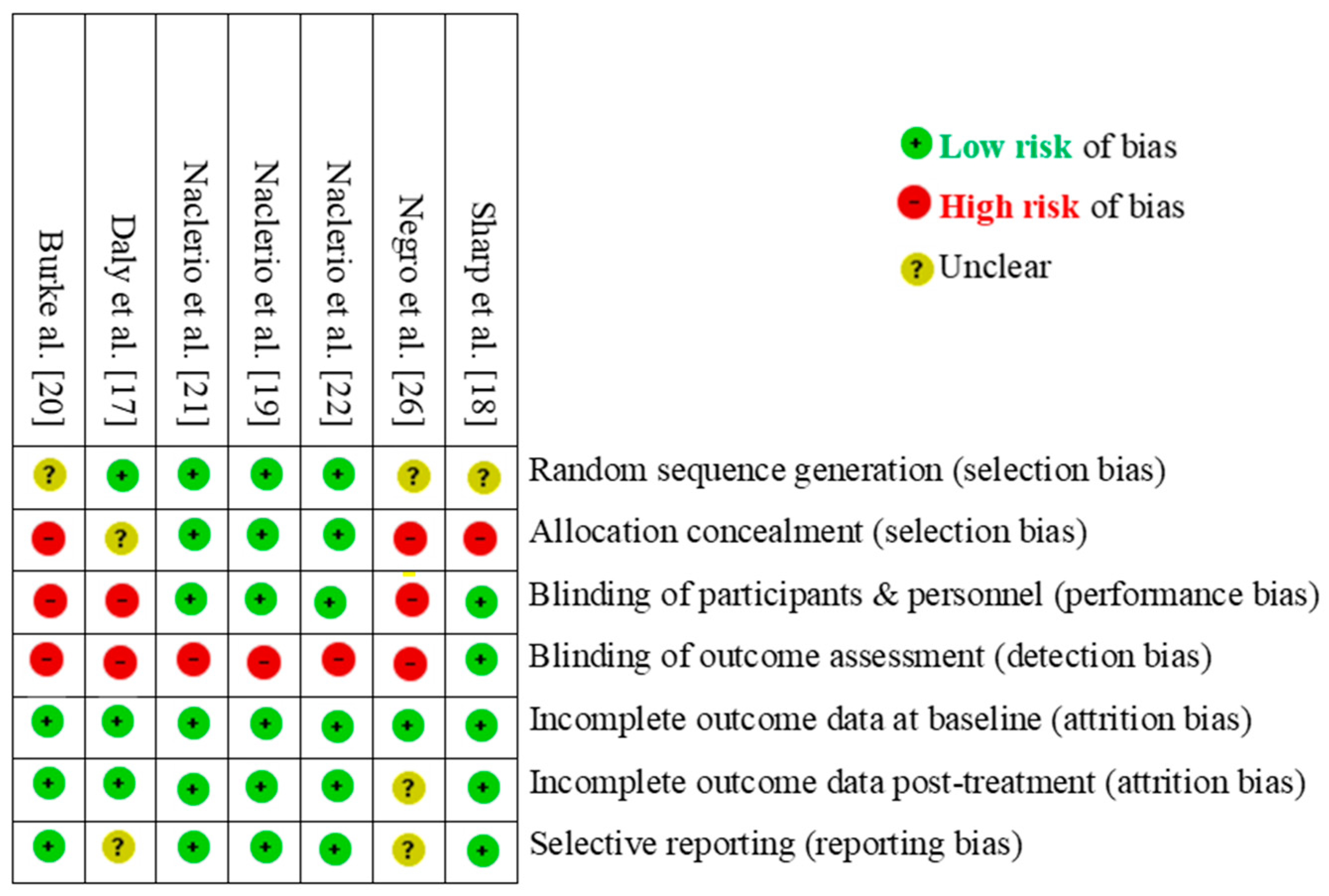 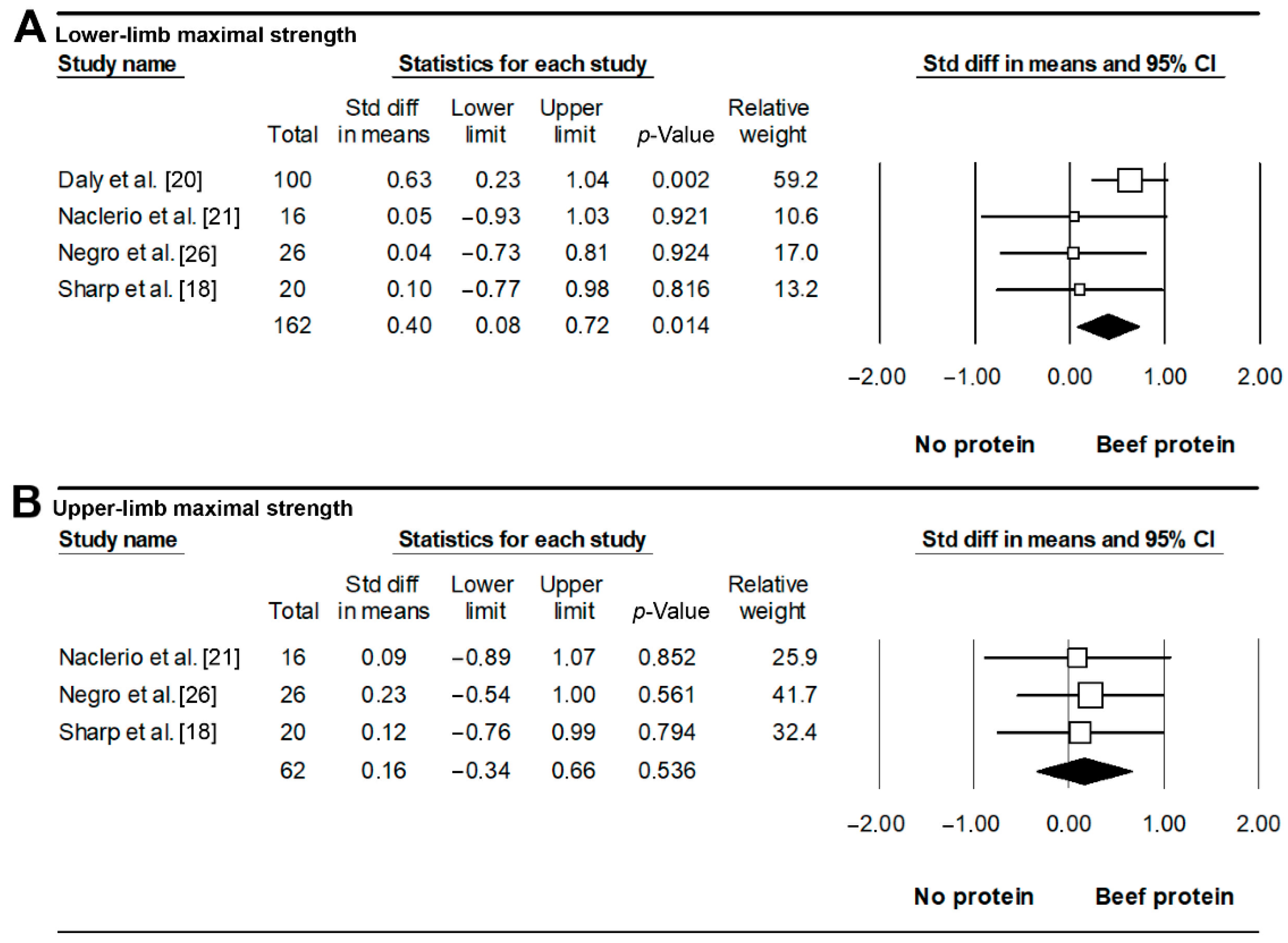 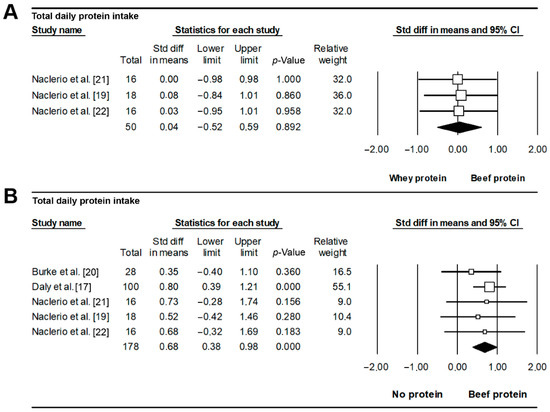 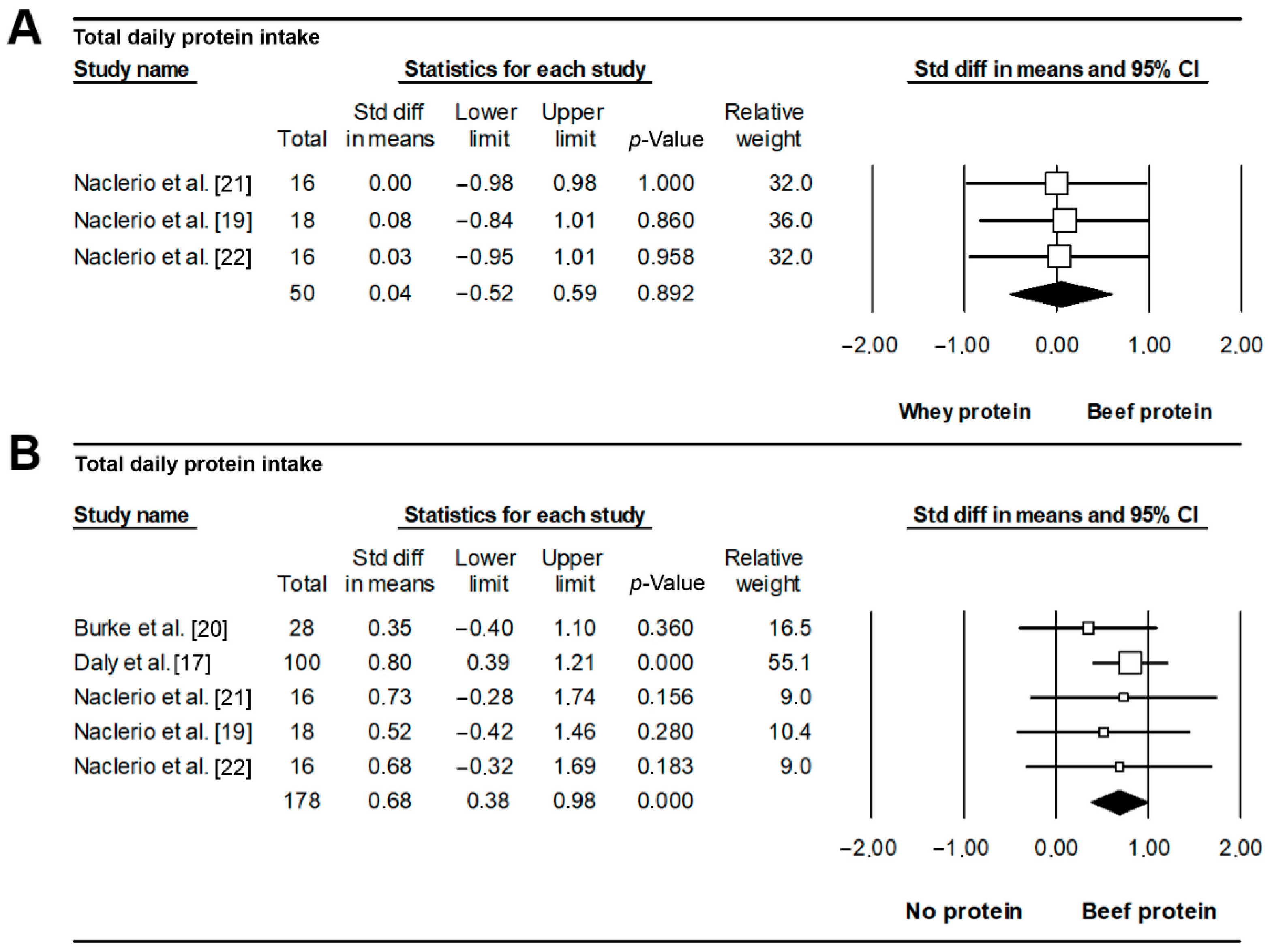