Association of Infant Feeding Patterns with Taste Preferences in European Children and Adolescents: A Retrospective Latent Profile Analysis
Next Article in Special Issue

The Immunomodulatory Properties of Extracellular Vesicles Derived from Probiotics: A Novel Approach for the Management of Gastrointestinal Diseases

Dietary Polyphenols—Important Non-Nutrients in the Prevention of Chronic Noncommunicable Diseases. A Systematic Review

The improvement of the social and economic conditions of society has eliminated the threat of death from the majority of infectious diseases. However, the rapid progress of civilization has created new possibilities for the appearance of factors with adverse effects for the health of society. This has led to increased morbidity from certain diseases, the presence of which had not been observed several centuries ago. Chronic noncommunicable diseases (e.g., cancers, cardio-vascular disorders, diabetes, obesity, neurodegenerative diseases) result from an inappropriate relationship between people and their environment. The common characteristic for all chronic diseases is a “new” form of inflammation, very often called metaflammation, which is considered as a subclinical, permanent inflammation. As a result, metabolic cascade, including cellular oxidative stress, atherosclerotic process, and insulin resistance, occurs, which slowly generates significant deterioration in the organism. Polyphenols are the major group of non-nutrients, considering their diversity, food occurrence, and biological properties. The current review aims to present a wide spectrum of literature data, including the molecular mechanism of their activity and experimental model used, and summarize the recent findings on the multitude of physiological effects of dietary polyphenols towards the prevention of several chronic diseases. However, despite several studies, the estimation of their dietary intake is troublesome and inconclusive, which will be also discussed. View Full-Text
Keywords: chronic noncommunicable diseases; polyphenols; flavonoids; dietary intake chronic noncommunicable diseases; polyphenols; flavonoids; dietary intake
►▼ Show Figures 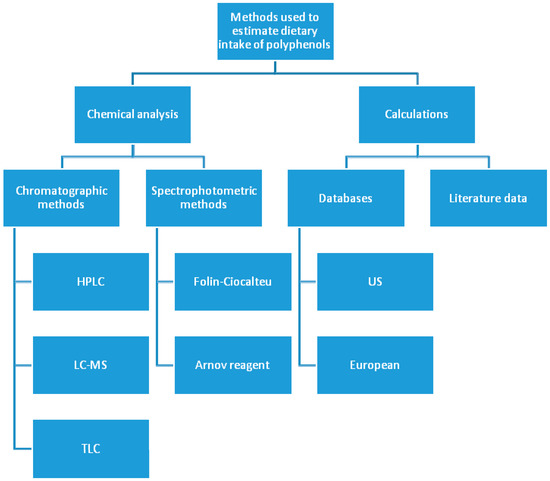