Nutraceuticals for the Treatment of Diabetic Retinopathy

Cataract, a visual impairment characterized by opacification of the lens, may be classified as an age-related disorder. Population-based studies indicate that lens opacities occur more often in women than in men [1,2]. Although estrogen deficiency occurs commonly in elderly women, which might suggest a link between this condition and cataract development, the data on the effect of estrogen on the opacity of the lens is contradictory. On the one hand, the meta-analysis from 2013 [3] showed that hormone replacement therapy reduces the risk of this disease and in vitro studies demonstrated the protective effect of estradiol against oxidative stress in the epithelial cells of the lens [4,5]. On the other hand, although there was a report suggesting that, in the experimental animals exposed to radiation, administration of estradiol may protect against lens opacity [6], other reports showed that treatment with estradiol may induce cataract [7,8]. The role of estrogens in cataract development and cataract dependence on gender has been presented by Zetterberg and Celojevic in a comprehensive review [9].
It is assumed that the development of disorders associated with estrogen deficiency in postmenopausal women, such as vasomotor symptoms, cardiovascular diseases or osteoporosis, is connected with oxidative stress [10,11,12]. Oxidative stress is also considered to be one of the causes of lens opacity [13,14]. Increased production of reactive oxygen species (ROS) and weakened antioxidant system leads to oxidative lens damage, which results in protein aggregation and lens turbidity [14,15]. It is believed that the use of antioxidants in the form of dietary components may be helpful to prevent disorders resulting from post-menopausal oxidative stress [16].
Antioxidants include, among others, phenolic acids, which are components of food products and medicinal plants [17]. The examples of phenolic acids are rosmarinic acid and sinapic acid, which are hydroxycinnamic acid derivatives. Rosmarinic acid is found mainly in plants of the Lamiaceae family, which are widely used as spices and medicinal plants, such as rosemary, spearmint, and lemon balm [18], while sinapic acid occurs in vegetables (especially from the Brassicaceae family, like tronchuda cabbage or broccoli), and fruits (e.g., strawberries or citruses) [19].
Our previous studies showed that both rosmarinic acid and sinapic acid had a positive effect on parameters related to glucose and lipid metabolism, as well as on some parameters of oxidative stress in the serum of ovariectomized rats in the early phase of estrogen deficiency [20,21]. Based on various experimental in vitro and in vivo animal studies, there are also suggestions on the possibility of using phenolic acids, including rosmarinic acid, to reduce cataract development [22,23,24,25]. However, there is still no data on the effects of plant-derived antioxidants, including rosmarinic and sinapic acid on oxidative stress parameters in the lenses exposed to estrogen deficiency. Based on literature data and our previous results, we hypothesized that both rosmarinic acid and sinapic acid may also show a protective antioxidative effect in the lenses of estrogen-deficient rats. Therefore, the study aimed to investigate the effect of rosmarinic and sinapic acids on the antioxidative abilities and oxidative damage parameters in the lenses of ovariectomized rats in the early phase of estrogen deficiency.

The experiment was carried out on three-month-old female Wistar rats. The experiment was conducted under the approval of the Local Ethics Committee in Katowice (permission numbers: 38/2015, 148/2015, and 66/2016). The rats were purchased at the Center of Experimental Medicine, Medical University of Silesia (Katowice, Poland).
In the course of the experiment the following drugs were administered orally to the rats: rosmarinic acid (Sigma-Aldrich, St. Louis, MO, USA), sinapic acid (Sigma-Aldrich, St. Louis, MO, USA) and estradiol hemihydrate (Estrofem, Novo Nordisk A/S, Bagsvard, Denmark). As anesthetics ketamine (Ketamina 10%, Biowet Puławy, Puławy, Poland) and xylazine (Xylapan, Vetoquinol Biowet, Gorzów Wlkp., Poland) were used.

During the acclimation period (13 days) and during the experiment, the animals had unlimited access to standard feed (Labofeed B, Wytwórnia Pasz “Morawski”, Kcynia, Poland) and drinking water. The rats were divided into 7 groups: (n = 10):
The OVX+ESTR group of rats was used as a positive control.
As previously described [20,21], rats from the SHAM group underwent a sham surgery, and in the other animals, bilateral ovariectomy was carried out. The sham and ovariectomy surgery were performed under general anesthesia by intraperitoneal (i.p.) administration of the mixture of ketamine and xylazine (87.5 and 12.5 mg/kg i.p., respectively).
Seven days after ovariectomy and sham surgery, the administration of rosmarinic acid, sinapic acid or estradiol to rats started. Phenolic acids and estradiol were administered orally (p.o.) using an intragastric tube once a day for 4 weeks in the form of water solution or suspension, both prepared with the addition of Tween 20 (maximum 1 μL of Tween 20 per 1 mL of water). The sham-operated and ovariectomized control rats were vehicle treated with water containing the same amount of Tween 20, in the same volume of 2 mL/kg p.o. To adjust the volume of administered substances, the rats were weighed twice a week. On the next day after the last administration of drugs and overnight fasting, the animals were sacrificed under general anesthesia (ketamine and xylazine) by cardiac exsanguinations and then the uterus, thymus, liver, right kidney, and eyeballs were removed. Serum obtained from the blood was used to determine biochemical parameters and parameters of oxidative stress, which were previously presented together with body mass and masses of selected organs [20,21]. The lenses were isolated from the eyes, weighed, and homogenized in a glass homogenizer in ice-cold 10 mM phosphate-buffered saline pH 7.4, giving 10% homogenates (w/v). Part of the total homogenate was frozen, and then used to determine TBARS (thiobarbituric acid reactive substances) and amyloid β1-42. The rest was centrifuged at 10,000 × g at 4 °C for 15 min. The supernatant was frozen and used to determine the remaining biochemical parameters. All spectrophotometric measurements were carried out with the use of a Tecan Infinite M200 PRO plate reader with Magellan 7.2 software (Tecan Austria, Grödig, Austria).

2.3. Determination of Soluble Protein in the Lenses

Determination of soluble protein was conducted according to Lowry’s method [26]. BSA was used to prepare the calibration curve, and the protein content was expressed in milligram per gram of the lens.

2.4. Determination of Superoxide Dismutase and Catalase Activities and Oxidative Damage Products Content in the Lenses

To determine the activities of the following antioxidant enzymes: superoxide dismutase (SOD) and catalase (CAT), Cayman kits (Cayman Chemical MI, USA) were used. The activities of SOD and CAT were expressed in U or nanomole/min, respectively, per milligram of protein.
The method of Ohkawa et al. [27] was used to determine the content of TBARS (thiobarbituric acid reactive substances) in the total homogenate of the lenses. This method is based on the reaction between lipid peroxidation products and thiobarbituric acid. TBARS content is expressed in nanomole per gram of the lens. The intensity of the obtained color was determined spectrophotometrically at the wavelength of 535 nm. To establish a standard curve, 1,1,3,3-tetraethoxypropane (Sigma-Aldrich, St. Louis, MO, USA) was used.
The concentration of advanced oxidation protein products (AOPP) in the lens homogenate was determined using spectrophotometric method described by Witko-Sarsat et al. [28]. The calibration curve was established using chloramine T (Sigma-Aldrich, St. Louis, MO, USA), while the absorbance was measured at the wavelength of 340 nm. The content of AOPP was expressed in nanomole chloramine T equivalents per milligram of protein.

2.5. Determination of Glutathione-related Enzymes Activities in the Lenses

2.6. Determination of Glutathione in the Lenses

The results are presented as the arithmetic mean ± SEM. One-way ANOVA followed by Duncan’s post-hoc test were applied to assess statistical significance of the results (Statistica 12 software, StatSoft Polska, Kraków, Poland). The results were assumed statistically significant if p ≤ 0.05.

3.1. Effect of Rosmarinic Acid and Sinapic Acid on the Lens Mass and Lens Soluble Protein Content

3.2. Effect of Rosmarinic Acid and Sinapic Acid on Superoxide Dismutase and Catalase Activities and on Oxidative Damage Products Content in the Lenses

3.3. Effect of Rosmarinic Acid and Sinapic Acid on Glutathione-Related Enzymes Activities in the Lenses

The GR, G6PD, and GGT activities in the lenses were decreased in the ovariectomized control rats in a statistically significant manner, whereas the GPx activity showed no statistically significant difference in comparison to the sham-operated control rats. The administration of estradiol to the estrogen-deficient rats did not affect the activities of the examined glutathione-related enzymes. A statistically significant increase in the GR activity was observed after the administration of rosmarinic acid at doses of 10 and 50 mg/kg and sinapic acid at doses of 5 and 25 mg/kg. After administration rosmarinic acid at 50 mg/kg, there was a tendency to increase (p = 0.058) in the G6PD activity, whereas the administration of 25 mg/kg of sinapic acid significantly increased the activity of this enzyme when compared to the ovariectomized control rats. Rosmarinic acid and sinapic acid had no effect on the activities of GPx and GGT (Table 3).

3.4. Effect of Rosmarinic Acid and Sinapic Acid on Glutathione Content in the Lenses

A statistically significant decrease in the content of the reduced glutathione (GSH) in the lenses was observed while the content of the oxidized glutathione (GSSG) and the GSH/GSSG ratio did not change in the ovariectomized control rats compared to the sham-operated rats. The administration of estradiol did not change the content of GSH and GSSG or GSH/GSSG ratio, whereas the administration of phenolic acids (rosmarinic acid at 10 and 50 mg/kg and sinapic acid at dose 5 and 25 mg/kg) resulted in the statistically significant increase in the GSH content in the lenses, without impact on the GSSG content when compared to the ovariectomized control rats. The use of rosmarinic acid in the estrogen-deficient rats at both doses did not affect the GSH/GSSG ratio, while the use of sinapic acid at both doses caused a significant increase in the GSH/GSSG ratio, compared to the ovariectomized control rats (Figure 2).

3.5. Effect of Rosmarinic Acid and Sinapic Acid on Amyloid β1-42 Content in the Lenses

Rosmarinic and sinapic acids contributed to the increase in GSH content in the lenses of rats in the early phase of estrogen deficiency. Due to the important role of GSH in maintaining the transparency of the lenses, it seems that these phenolic acids may exert a beneficial effect on the redox status in the eye lenses of ovariectomized rats, and, thus, may be a supporting factors in the prevention of cataract formation.

This research was funded by the Medical University of Silesia grant number KNW-1-087/N/8/0. 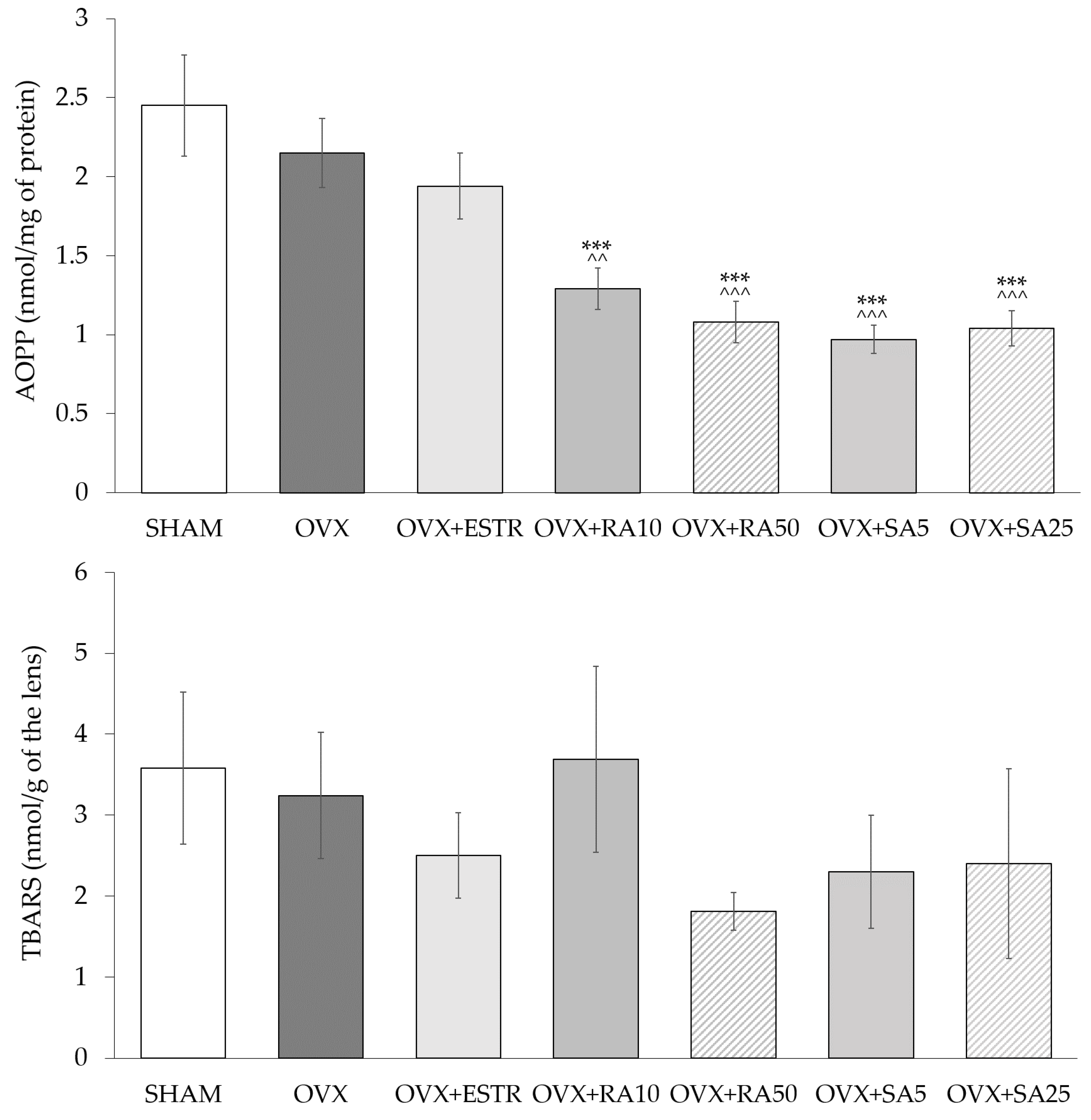 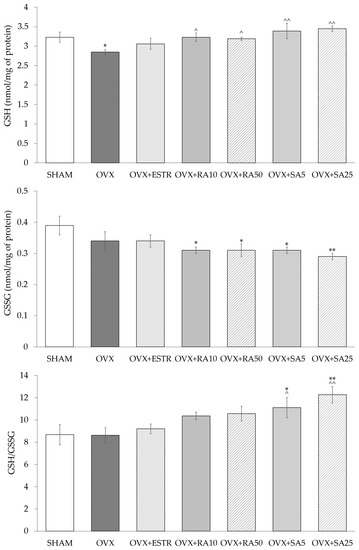 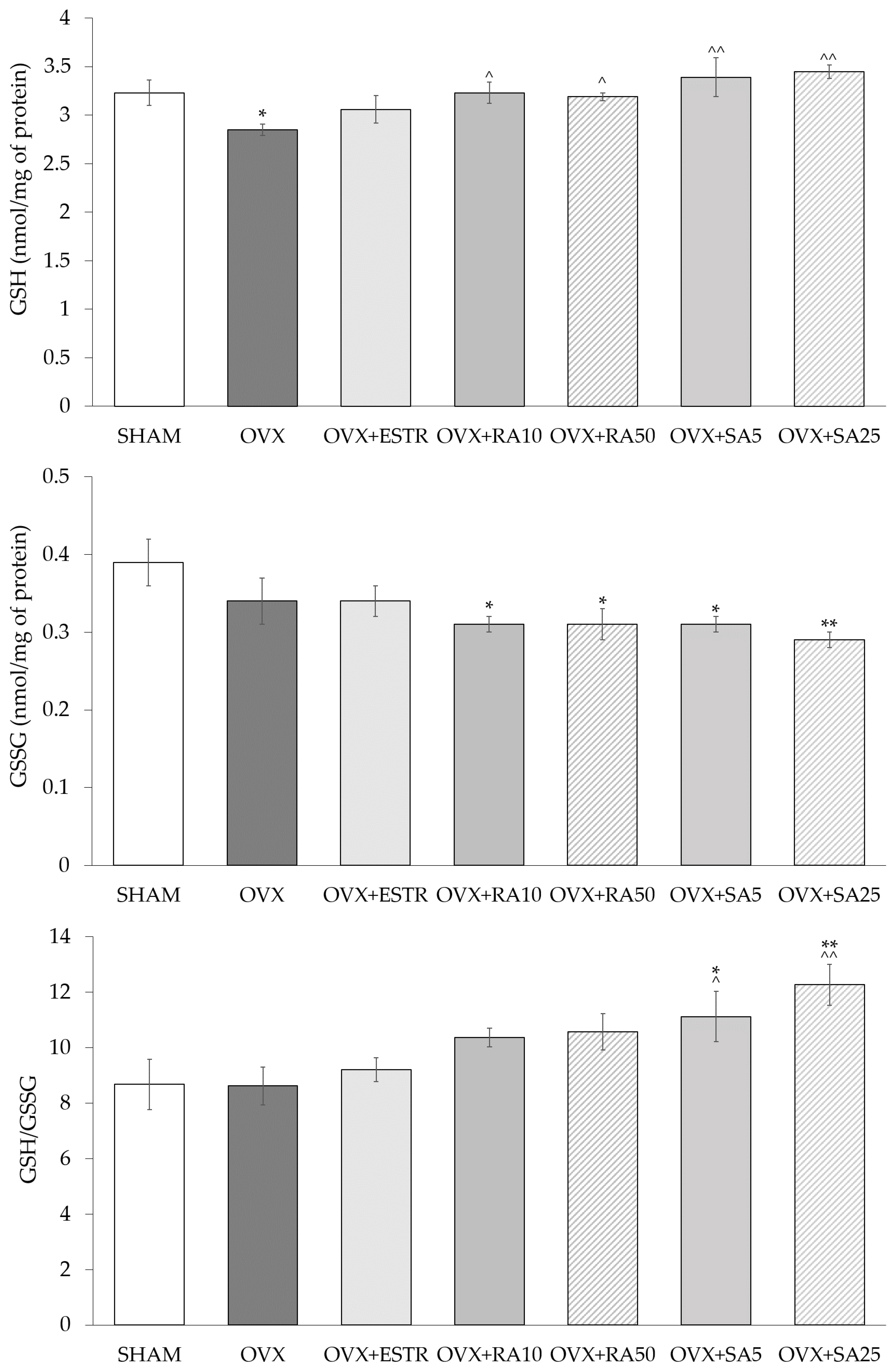 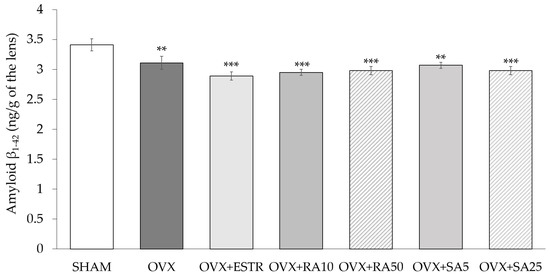 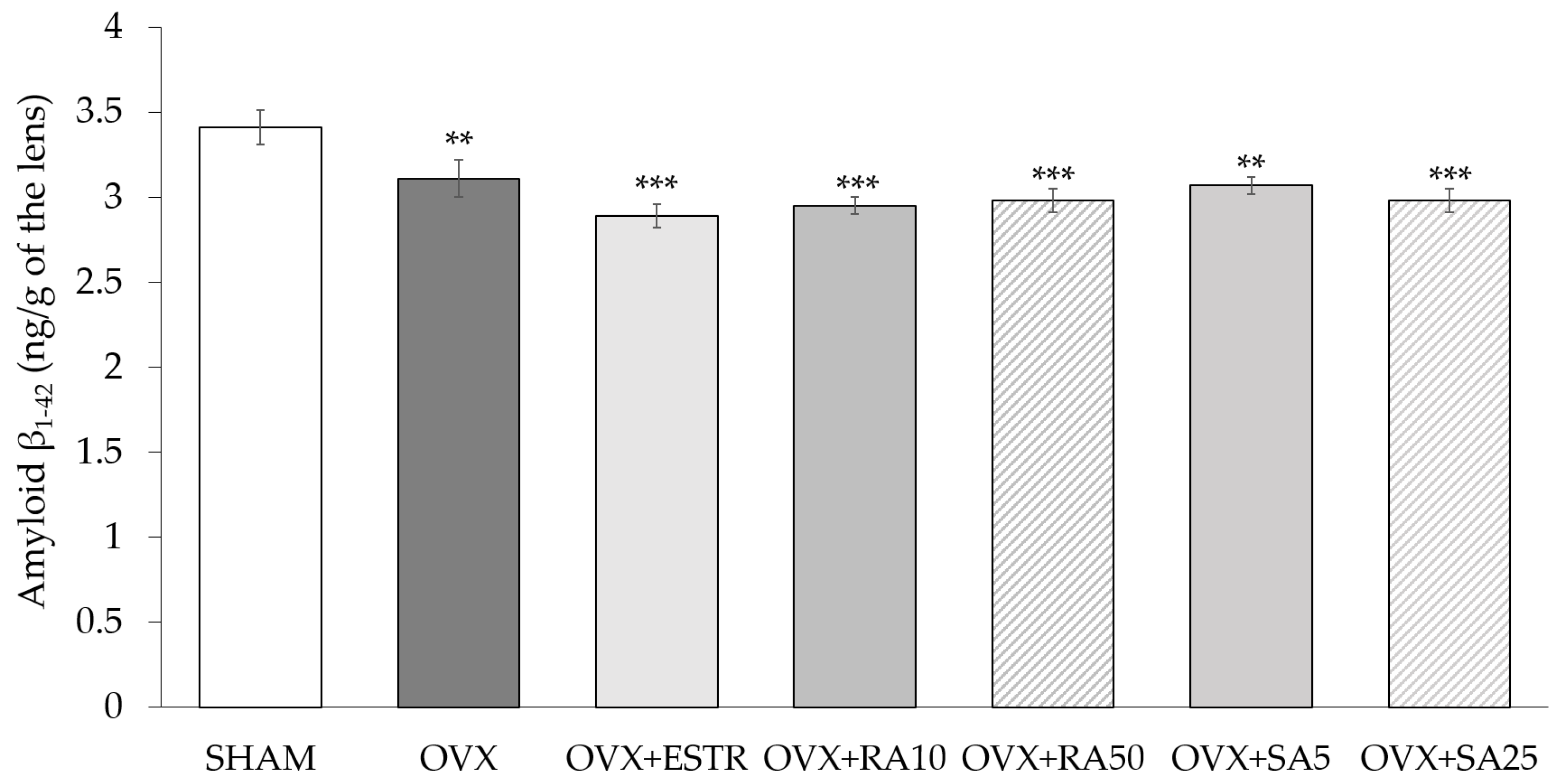