Coffee Consumption and Risk of Colorectal Cancer: A Systematic Review and Meta-Analysis of Prospective Studies

The ergogenicity of caffeine on several exercise and sport situations is well-established. However, the extent of the ergogenic response to acute caffeine ingestion might greatly vary among individuals despite using the same dosage and timing. The existence of one or several individuals that obtained minimal ergogenic effects or even slightly ergolytic effects after caffeine intake (i.e., non-responders) has been reported in several previous investigations. Nevertheless, the concept non-responding to caffeine, in terms of physical performance, relies on investigations based on the measurement of one performance variable obtained once. Recently it has been suggested that correct identification of the individual ergogenic effect induced by caffeine intake requires the repeated measurement of physical performance in identical caffeine–placebo comparisons. In this communication, we present data from an investigation where the ergogenic effect of acute caffeine intake (3 mg/kg) was measured eight times over a placebo in the same individuals and under the same conditions by an incremental cycling test to volitional fatigue and an adapted version of the Wingate cycling test. The ergogenic response to caffeine varied from 9% to 1% among individuals, but all participants increased both cycling power in the incremental test and Wingate mean power at least three to eight times out of eight the caffeine–placebo comparisons. These data expand the suggestion of a minimal occurrence of caffeine non-responders because it shows that all individuals responded to caffeine when caffeine is compared to a placebo on multiple and repeated testing sessions.
Keywords: individual responses; responders; exercise performance; ergogenic aids individual responses; responders; exercise performance; ergogenic aids

2018 has been a prolific year for the publication of manuscripts aimed at explaining the causes of the interindividual variations for the ergogenic response of caffeine ingestion on exercise performance. Particularly, we read with interest the reviews by Southward et al. [1] and Fulton et al. [2] and the letter by Grgic [3], published in Nutrients in 2018, because they offered new insights towards unveiling the causes of the variability on physiological responses to caffeine. With this communication, we want to expand the understanding about why some individuals obtain less ergogenic benefits after the ingestion of a moderate dose of caffeine than others, and perhaps it will help to dispel the myth/concept of non-responders to caffeine, at least when referring to exercise performance.

The utility of caffeine to increase physical performance in several exercise and sport situations is well-established and has been recently confirmed by systematic reviews and meta-analyses [4,5,6,7]. In addition, the use of caffeine or caffeinated products before competition is high, especially in individual sports or athletes of sports with an aerobic-like nature [8]. However, a small number of investigations have shown that the extent of the ergogenic response(s) to acute caffeine ingestion might greatly vary among individuals ([9,10,11] and the analysis of several investigations in [3]). These latter investigations have used cross-over and randomized experimental designs where the intake of a moderate dose of caffeine (1–6 mg/kg) is compared to a placebo condition in a group of individuals. Interestingly, these investigations indicated that, despite caffeine having produced an increase in physical performance as a group mean, one or several individuals obtained minimal ergogenic effects or even slightly ergolytic effects after caffeine intake despite being under the same experimental protocol. These individuals are frequently categorized as non-responders to the ergogenic effects of caffeine [12] and the causes for the lack of a positive physical response to caffeine have been associated to genetic (CYP1A2 and ADORA2A polymorphisms) and environmental factors, such as tolerance developed by chronic caffeine use and inappropriate timing and dose of administration or training status [13,14].

3. The Concept of Non-Responding to Caffeine Based on One Caffeine–Placebo Comparison

Recently, Pickering and Kiely [13] and Grgic [3] have criticized the concept non-responding to caffeine, in terms of physical performance, because this notion mostly relies on investigations based on the measurement of one performance variable obtained once. This experimental methodology to assess individual responses to caffeine ingestion might produce erroneous inferences because an individual does not always respond to caffeine to the same extent in all forms of exercise testing [9,15]. In addition, the reliability of the exercise test also needs to be considered when extrapolating conclusions regarding possible non-responses to the performance-enhancing effects of acute caffeine intake [3]. In fact, investigations where the ergogenic response to caffeine was explored by using the results of more than one physical performance test have shown that one participant might be categorized as a responder and a non-responder to caffeine at the same time due to his/her different outcomes in the different performance tests [9,15]. Pickering and Kiely [13] and Grgic [3] concur in suggesting that correct identification of the individual ergogenic effect induced by caffeine intake requires the repeated measurement of physical performance in identical caffeine–placebo comparisons. As suggested by Grgic [3], one of the following options can be selected to assess the individual ergogenic effect induced by caffeine: (1) multiple exercise tests with the same dose of caffeine or, (2) multiple doses of caffeine with the same exercise test, or (3) using a more complex protocol that combines repeated assessments of physical performance on different days using the same exercise test and dose of caffeine. If this is the case, most of the previous investigations on the study of individual responses to ergogenic effects of caffeine might not be methodologically correct because the categorization has been mainly based on one caffeine–placebo comparison.

In conclusion, the data provided in this communication do not dispute the existence of a great interindividual variability to the ergogenic effects of caffeine ingestion, nor the genetic, environmental, or epigenetic causes associated to this variability. However, this analysis suggests that all individuals, to some extent, positively respond to the acute ingestion of 3 mg/kg of caffeine, while the magnitude of the ergogenic effect might be the result of the totality of consequences induced by caffeine ingestion on the human body. In this respect, this communication suggests that the individuals with a high response to the cardiovascular effects of caffeine would be less prone to obtaining ergogenic benefits from this stimulant. Caffeine ergogenicity might be subject to genetic influence, but future investigations on this topic should assess the individual ergogenic response to caffeine by using different forms of exercise testing and/or by using well-standardized caffeine–placebo comparisons on multiple, repeated testing sessions. In the point of view of the authors, this repeated measurement of the ergogenic effect of caffeine would help to reduce the equivocal findings of previous investigations on genetic variations [2]. From a practical perspective, the adjustment of appropriate dosage, timing, and form of administration of caffeine for an athlete might require several examinations in which physical performance and side-effects of caffeine should be measured and registered over a control situation. Gathering conclusions about the ergogenic effect of caffeine in one individual solely based on the results from one performance test might induce erroneous conclusions in both scientific and sport settings. The use of multiple, repeated comparisons between a potentially active substance vs. a placebo might also be recommended when investigating the individual ergogenic responses to other ergogenic substances/supplements.

This investigation did not receive any funding. 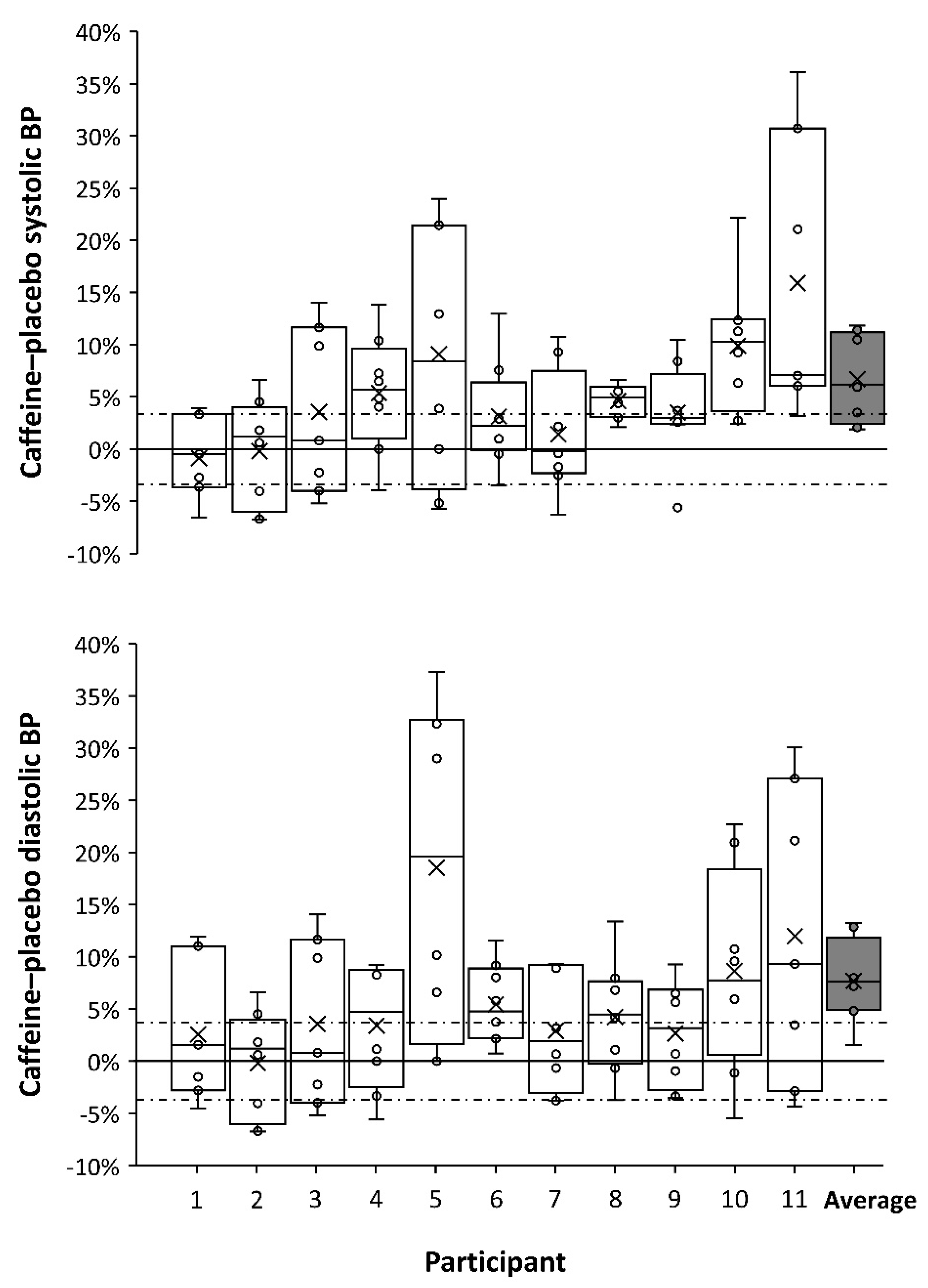 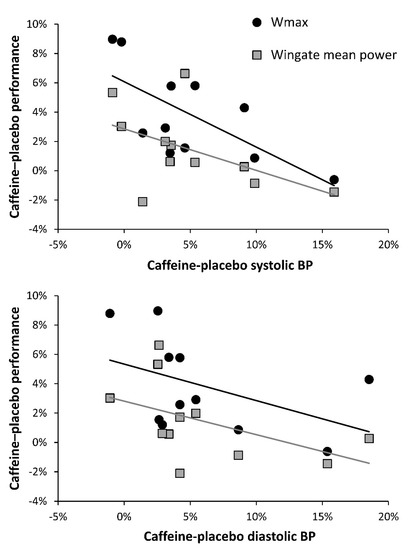 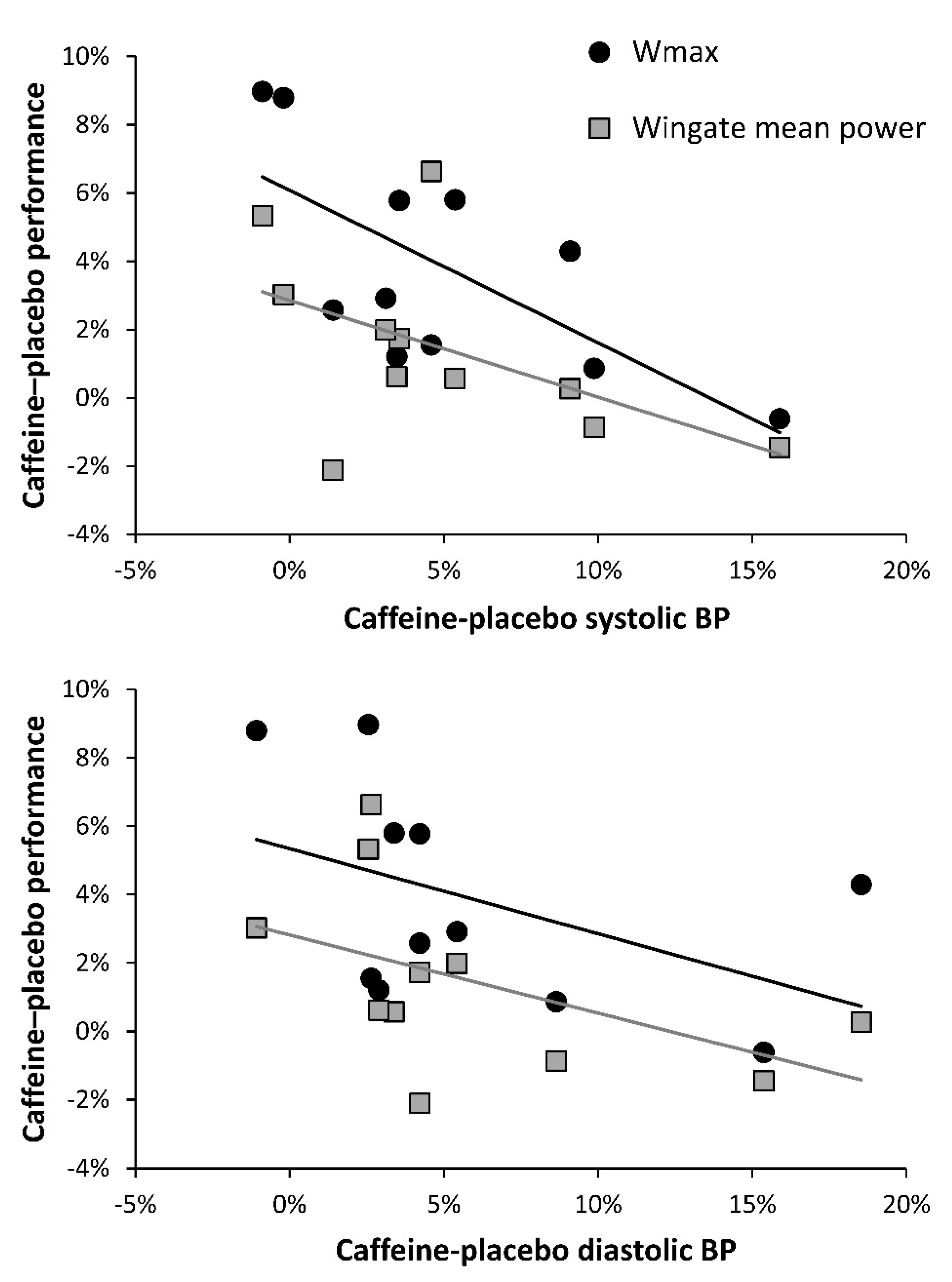