Association between Sleep Disturbances and Liver Status in Obese Subjects with Nonalcoholic Fatty Liver Disease: A Comparison with Healthy Controls

In our previous studies, a standardized phlorotannin (brown seaweed polyphenol) supplement (PS) exhibited sleep-promoting effects via type A γ-aminobutyric acid-benzodiazepine receptors in mice. In addition, in human clinical trials, it decreased wake after sleep onset in adults with sleep disturbance. In this follow-up study, we investigated whether PS attenuates caffeine-induced sleep disruption in mice. The effects of PS were evaluated in a caffeine model by analyzing sleep architecture based on electroencephalogram and electromyogram findings, and were compared with the effects of a well-known sedative-hypnotic drug zolpidem (ZPD). As expected, oral administration of caffeine (25 mg/kg) significantly increased sleep latency and decreased the amount of non-rapid eye movement sleep (NREMS). In the caffeine + PS and caffeine + ZPD groups, PS (500 mg/kg) attenuated caffeine-induced sleep disruption, and its effects were comparable with those of ZPD (10 mg/kg). In particular, PS inhibited the arousal effects of caffeine without change in delta activity during NREMS, whereas ZPD produced a decrease in the delta activity. Considering global trends in coffee and energy drink consumption, our finding suggest that PS may be useful to relieve transitory insomnia symptoms caused by caffeine consumption, unlike the prescription drug ZPD. View Full-Text
Keywords: phlorotannin; caffeine-induced arousal; sleep disruption; sleep-promoting; delta activity phlorotannin; caffeine-induced arousal; sleep disruption; sleep-promoting; delta activity
►▼ Show Figures 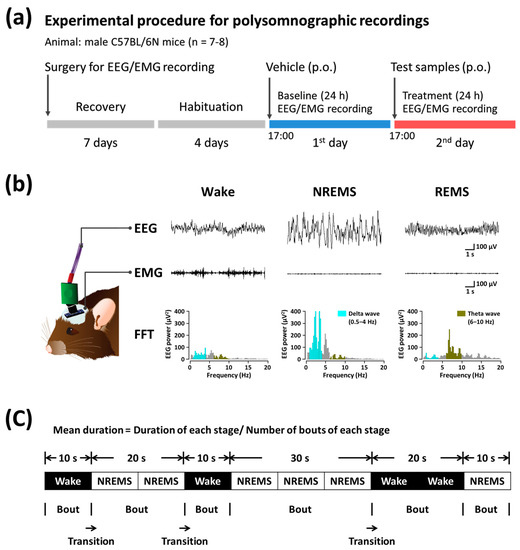