Almonds provide a satiating, healthy source of fat and fiber. The postprandial metabolic and satiety response to 2 ounces of nuts or dairy was assessed in 18 overweight/obese women during late pregnancy. Serum glucose, triglycerides, insulin, c-peptide, leptin, ghrelin, and lipoprotein particles were measured prior to and during a 5-h postprandial period following the consumption of an isocaloric breakfast meal with equivalent amounts of fat from either nuts or dairy on two separate mornings. Satiety was assessed by visual analogue scale (VAS) questionnaires and ad libitum food intake at the end of the study. At 33 weeks gestation, the women had gained an average of 7.0 ± 4.4 kg during gestation. Body fat averaged 41.9 ± 5.5% and hemoglobin A1c levels were elevated, (7.2 ± 0.6%). Fasting glucose levels were normal, but hyperinsulinemia was evident. The two test meals did not affect the postprandial metabolic response, but glucose, triglyceride, and ghrelin concentrations changed with time during the postprandial period (p < 0.001, p = 0.0008, p = 0.006). Satiety measures did not differ between the two test meals. Consuming an isocaloric breakfast meal with equivalent amounts of fat from nuts or dairy did not alter postprandial levels of blood lipids, glucose, hormones, or measures of satiety in overweight/obese, pregnant women. View Full-Text
Keywords: metabolism; overweight; pregnancy; dairy; nuts metabolism; overweight; pregnancy; dairy; nuts
►▼ Show Figures 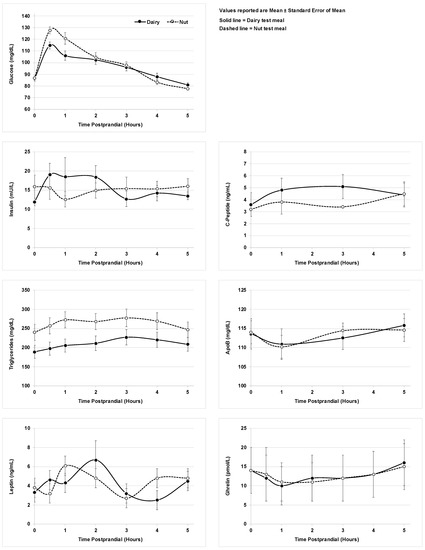