Differences and Similarities between Front-of-Pack Nutrition Labels in Europe: A Comparison of Functional and Visual Aspects
Previous Article in Journal

Recently, front-of-package (FOP) food labeling systems have captured the attention of researchers and policy makers. Several Latin American governments are currently considering employing different FOP labeling systems. However, there is much need for more research-based evidence in these countries. In this paper, we study whether food-purchasing decisions and the nutritional qualities of those purchases are influenced by randomly informing some customers and not others about an FOP label known as Nutri-Score. We also separate the information effect from the effect of being aware of the system. We combined a randomized field intervention in a university cafeteria in Bogotá, Colombia with data from an after-purchase survey and receipts. We found that randomly providing information on Nutri-Score increased total expenditure by $0.18. Additional spending on healthier items was 21% or $0.26 higher, with no change for less healthy items. Expenditure estimates were higher among customers who were aware of the system’s existence. Customers in the study were also 10% more likely to buy a healthier item than control customers were, and the concentration of protein in their purchases was greater. Information on the Nutri-Score system increased the store’s sales. This potential financial incentive may facilitate the implementation of Nutri-Score. View Full-Text
Keywords: randomized field intervention; food labeling; Nutri-Score; store sales randomized field intervention; food labeling; Nutri-Score; store sales
►▼ Show Figures 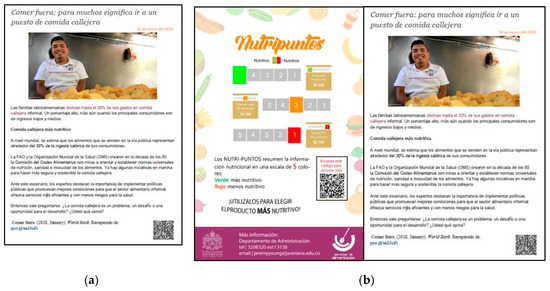