Effects of Varying the Color, Aroma, Bitter, and Sweet Levels of a Grapefruit-Like Model Beverage on the Sensory Properties and Liking of the Consumer

Color, aroma, sweet, and bitter tastes contribute to the sensory perception of grapefruit juice. Consumers differ about liking grapefruit. A reason is the bitter taste that characterize the fruit. The objective was to determine the effect of varying the color (red or yellow), aroma (two levels), bitterness (three levels), and sweetness (three levels) of a grapefruit-like model beverage, on consumers’ liking and perception of its sensory properties. The sensory profiles of thirty-six grapefruit-like beverages, created on the basis of a factorial design, has been described. Consumers rated their liking of color, aroma, and flavor of the twelve most diverse beverages. Bitter and sweet levels of the beverages had a significant effect on the flavor and aftertaste attributes. Aroma concentration had a significant effect on the majority of the sensory attributes. Color had a significant effect on perception of some of the aroma attributes, as well as the grapefruit’s flavor intensity. Consumers liked the red beverages more than the yellow ones, and those with low aroma over the high aroma intensity. Consumers preferred the low bitter/high sweet beverages. Pungent and grapefruit aroma were found to be negative drivers for liking of the aroma. Sweet and citrus flavors were found to be positive drivers and sour and bitter flavors were found to be negative drivers of flavor-preferences (or liking) of the tested beverages. View Full-Text
Keywords: grapefruit; sensory; consumer; bitter; naringin; sweet; aroma; color; hedonic grapefruit; sensory; consumer; bitter; naringin; sweet; aroma; color; hedonic
►▼ Show Figures 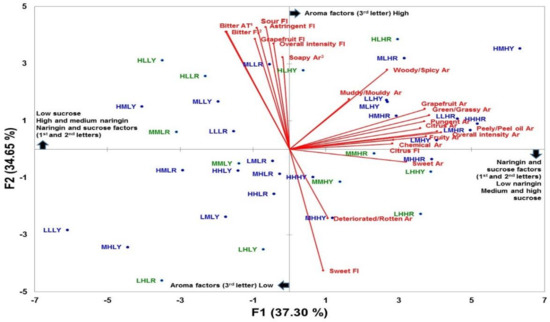