Extract from Aronia melanocarpa L. Berries Prevents Cadmium-Induced Oxidative Stress in the Liver: A Study in A Rat Model of Low-Level and Moderate Lifetime Human Exposure to this Toxic Metal
Previous Article in Special Issue

A Review on Gut Remediation of Selected Environmental Contaminants: Possible Roles of Probiotics and Gut Microbiota

Various environmental contaminants including heavy metals, pesticides and antibiotics can contaminate food and water, leading to adverse effects on human health, such as inflammation, oxidative stress and intestinal disorder. Therefore, remediation of the toxicity of foodborne contaminants in human has become a primary concern. Some probiotic bacteria, mainly Lactobacilli, have received a great attention due to their ability to reduce the toxicity of several contaminants. For instance, Lactobacilli can reduce the accumulation and toxicity of selective heavy metals and pesticides in animal tissues by inhibiting intestinal absorption of contaminants and enhancing intestinal barrier function. Probiotics have also shown to decrease the risk of antibiotic-associated diarrhea possibly via competing and producing antagonistic compounds against pathogenic bacteria. Furthermore, probiotics can improve immune function by enhancing the gut microbiota mediated anti-inflammation. Thus, these probiotic bacteria are promising candidates for protecting body against foodborne contaminants-induced toxicity. Study on the mechanism of these beneficial bacterial strains during remediation processes and particularly their interaction with host gut microbiota is an active field of research. This review summarizes the current understanding of the remediation mechanisms of some probiotics and the combined effects of probiotics and gut microbiota on remediation of foodborne contaminants in vivo. View Full-Text
Keywords: environmental contaminants; remediation; probiotics; gut microbiota; foodborne environmental contaminants; remediation; probiotics; gut microbiota; foodborne
►▼ Show Figures 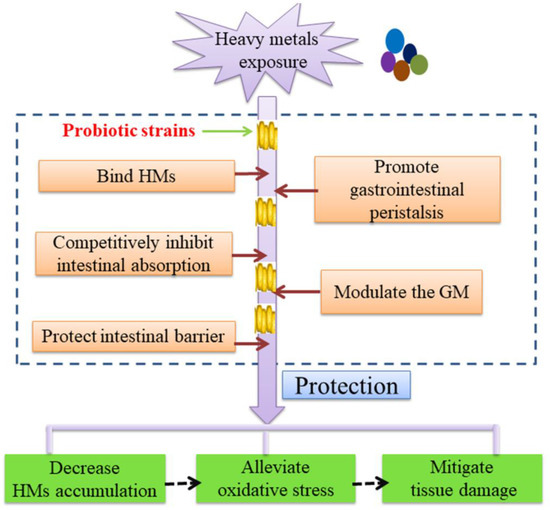