How Does Diet Change with A Diagnosis of Diabetes? Protocol of the 3D Longitudinal Study
Next Article in Special Issue

The Gut–Brain Axis in the Neuropsychological Disease Model of Obesity: A Classical Movie Revised by the Emerging Director “Microbiome”
Previous Article in Special Issue

Obesity substantially increases the risk of type 2 diabetes, cardiovascular disease, and certain types of cancer [1]. Lifestyle change, including improved dietary choices, represents a primary prevention tool [2,3]. The influence of diet in the development of insulin resistance, prediabetes, and type 2 diabetes was investigated intensively [4,5,6]. Gastrointestinal hormones are involved in regulation of glucose metabolism, energy homeostasis, satiety, and weight management [7]. Ingestion of food triggers secretion of incretin hormones from the gastrointestinal tract, namely glucagon-like peptide-1 (GLP-1) and gastric inhibitory peptide (GIP), which enhance insulin secretion and help maintain glucose homeostasis [8]. Furthermore, the satiety hormones GLP-1 [9], peptide YY (PYY) [10], pancreatic polypeptide (PP) [11] and amylin [12] regulate appetite and energy homeostasis. The release of these satiety hormones can depend on meal composition and differs between impaired and normoglycemia [13].
Prospective observational studies indicate that consumption of red meat is positively associated with incidence of type 2 diabetes [14,15]. This association is particularly strong for processed meat. People consuming any processed meats have a one third higher likelihood to develop diabetes compared with those who do not consume any [16]. Several studies demonstrated a harmful effect of saturated fatty acids from meat and other animal products on insulin resistance and glucose tolerance [4,17] as well as other health issues such as cardiovascular disease [18]. In contrast, people following plant-based diets have their risk of diabetes cut in half, compared with non-vegetarians [19]. Several randomized clinical trials in participants with type 2 diabetes demonstrated a greater increase in insulin sensitivity and improvement in glycemic control with a plant-based diet when compared with a conventional diet [20,21].
We investigated postprandial metabolism in response to two meals matched for energy and macronutrient content: a processed-meat and cheese burger and a plant-based burger with tofu. We measured the physiological response to these meals in men with type 2 diabetes, body mass index (BMI) and age-matched obese normoglycemic men, and healthy age-matched controls. Our hypothesis is that a plant-based meal produces higher levels of gastrointestinal hormones and increased satiety in men with type 2 diabetes or obesity while having a negligible effect on healthy men. Our results will provide insight into the pathophysiologic mechanisms of the development of type 2 diabetes and will be used to inform the evidence base for dietary guidelines for men with type 2 diabetes.

We used a design of a randomized crossover study and enrolled 60 men; 20 men diagnosed with type 2 diabetes (T2D), 20 obese, BMI- and age-matched men (O), and 20 age-matched healthy controls (H) with two interventions. Screening was performed over the phone, contacting men from our hospital database who met the inclusion criteria. Eligible potential study participants came for an in-person meeting and were provided with details about the study participation. Recruitment was performed between June 2015 and June 2017. All men gave a written consent prior to enrollment in the study. This study was approved by the Ethics Committee of the Thomayer Hospital and Institute for Clinical and Experimental Medicine in Prague, Czech Republic on August 13, 2014. The protocol identification number is G14-08-42. The trial is prospectively registered with ClinicalTrials.gov (ID: NCT02474147).

All study participants were Caucasian men with a Czech nationality. Men with type 2 diabetes were between 30–65 years old. Their body mass index (BMI) was between 25–45 kg/m2 and they were treated by lifestyle alone or with oral hypoglycemic agents (metformin and/or sulfonylureas) for at least one year, who had an HbA1c from ≥42 to ≤105 mmol / mol, (≥6.0 to ≤11.8%) and at least three hallmarks of the metabolic syndrome. Our obese men were BMI- and age-matched to men with type 2 diabetes. Healthy men were age-matched controls within a healthy BMI range (BMI between 19–25 kg/m2) and with normal glucose tolerance. Exclusion criteria were thyroid, liver or kidney disease, drug or alcohol abuse, unstable drug therapy or a significant weight loss of more than 5% of body weight in the last three months.

All men attended 2 study mornings. Before their first test morning, they were randomly assigned to an order of the test meals by the study physician (MK). Order of intervention was determined with a random sequence generator. The randomization protocol could not be accessed beforehand. The interventions were unmasked. MK was not involved in data analysis. Outcome assessors were blinded to the interventions.

All men fasted for a minimum of 10 to 12 hours overnight. Men with type 2 diabetes were instructed to skip their diabetes medication the evening and the morning before the assessments. The meal consisted of either a processed meat and cheese burger (M-meal), or a plant-based tofu burger (V-meal). The staff delivered the meals fresh from the vendor. Tap water was allowed ad libitum. Plasma concentrations of gastrointestinal hormones, and self-reported satiety on a visual analogue scales were measured. Measurements were taken at baseline (time 0) and then 30, 60, 120 and 180 min after both meals.

Anthropometric measures and blood pressure: A stadiometer was used to measure height and a periodically calibrated scale accurate to 0.1 kg was used to measure body weight. Waist circumference was measured with a tape measure placed at the midpoint between the lowest rib and the upper part of the iliac bone. Resting blood pressure was measured in a seated position after 5 min of resting, using a digital M6 Comfort monitor (Omron, Kyoto, Japan). Out of three measurements, the first measurement was disregarded, and a mean value was calculated for the remaining two measurements.
Gastrointestinal and appetite hormones. The concentrations of glucagon-like peptide-1 (GLP-1), amylin, and peptide YY (PYY) were measured using a Milliplex MAP Human Metabolic Hormone Magnetic Bead Panel (HMHEMAG-34K) (Millipore, Billerica, MA, USA) and a Luminex 100 IS analyzer (Luminex Corporation, Austin, TX, USA).

Sample size was estimated based on a power analysis with an alpha of 0.05 and a power of 0.80 to detect between intervention differences in postprandial GLP-1 secretion. This required 14 participants in each group to complete both interventions. Intention to treat analysis was performed, using repeated-measures Analysis of variance (ANOVA). We included inter-individual factors (T2D vs. obese vs. healthy controls), intra-individual factors (time during the meal test) and interaction between factors (divergence degree between time profiles of each group) in the model. Spearman’s correlations were calculated to test the relationship between postprandial changes in gastrointestinal hormones. They were calculated for the fasting plus for changes (30–0, 60–30, 120–60, and 180–120 minutes after ingestion of standard meal): for each period separately, and then for all 5 values combined. Analyses were undertaken using PASS 2005 statistical software (Number Cruncher Statistical Systems, Kaysville, UT, USA), with the statistician blinded to the analyses. All results are presented as means with 95% confidence intervals (CI).

The flow diagram is shown in Figure 1. Participant characteristics are shown Table 1. The meal composition is shown in Table 2.

Our findings indicate that plant-based meals with tofu may be an effective tool to increase postprandial secretion of gastrointestinal hormones, as well as promote satiety, compared to processed meat and cheese, in healthy, obese, and diabetic men. These positive properties may have practical implications for the prevention of type 2 diabetes.

H.K. and T.P. designed the study, wrote the grant application, and study protocol. M.K. recruited the patients, randomized the order of the test meals, and collected the data. M.H. (Martin Haluzik) and R.P. acquired and analysed data. M.H. (Martin Hill) carried out statistical analyses and interpretation of data. L.T. and H.K. drafted the manuscript. All authors had full access to data, critically revised the article and approved the manuscript for publication. H.K. is the guarantor of this work and takes responsibility for the integrity of the data and the accuracy of the analysis.

This work was supported by the project grant AZV15-27338A from Ministry of Health, Prague, Czech Republic.

The authors gratefully acknowledge Andrew Reynolds for his kind help with the final edits of the manuscript.

Hana Kahleova is Director of Clinical Research at Physicians Committee for Responsible Medicine, a non-profit organization providing nutrition research and education. None declared. 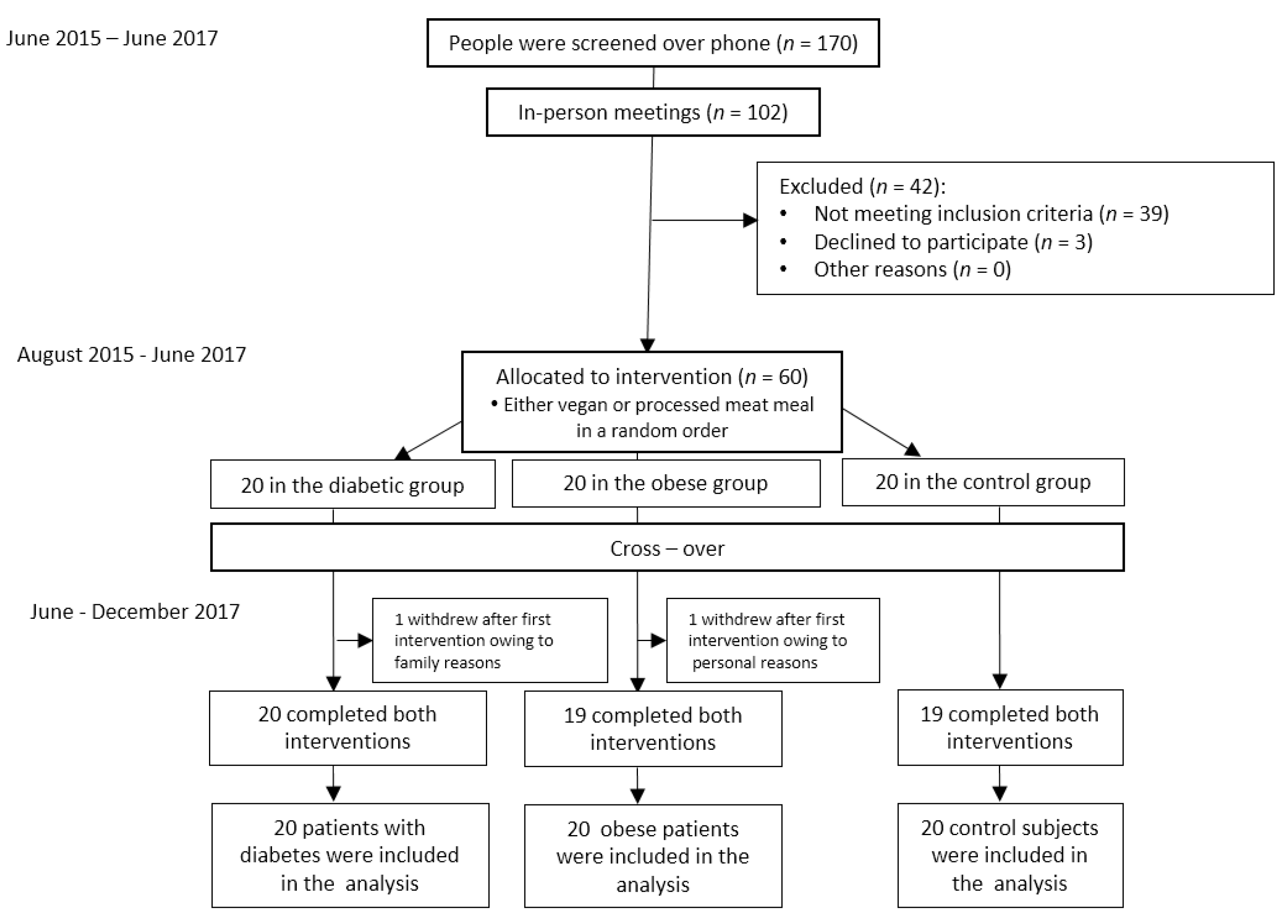