The Effect of Depressive Symptoms on the Association between Gluten-Free Diet Adherence and Symptoms in Celiac Disease: Analysis of a Patient Powered Research Network

Background: The prevalence of depression in celiac disease (CD) is high, and patients are often burdened socially and financially by a gluten-free diet. However, the relationship between depression, somatic symptoms and dietary adherence in CD is complex and poorly understood. We used a patient powered research network (iCureCeliac®) to explore the effect that depression has on patients’ symptomatic response to a gluten-free diet (GFD). Methods: We identified patients with biopsy-diagnosed celiac disease who answered questions pertaining to symptoms (Celiac Symptom Index (CSI)), GFD adherence (Celiac Dietary Adherence Test (CDAT)), and a 5-point, scaled question regarding depressive symptoms relating to patients’ celiac disease. We then measured the correlation between symptoms and adherence (CSI vs. CDAT) in patients with depression versus those without depression. We also tested for interaction of depression with regard to the association with symptoms using a multiple linear regression model. Results: Among 519 patients, 86% were female and the mean age was 40.9 years. 46% of patients indicated that they felt “somewhat,” “quite a bit,” or “very much” depressed because of their disorder. There was a moderate correlation between worsened celiac symptoms and poorer GFD adherence (r = 0.6, p < 0.0001). In those with a positive depression screen, there was a moderate correlation between worsening symptoms and worsening dietary adherence (r = 0.5, p < 0.0001) whereas in those without depression, the correlation was stronger (r = 0.64, p < 0.0001). We performed a linear regression analysis, which suggests that the relationship between CSI and CDAT is modified by depression. Conclusions: In patients with depressive symptoms related to their disorder, correlation between adherence and symptoms was weaker than those without depressive symptoms. This finding was confirmed with a linear regression analysis, showing that depressive symptoms may modify the effect of a GFD on celiac symptoms. Depressive symptoms may therefore mask the relationship between inadvertent gluten exposure and symptoms. Additional longitudinal and prospective studies are needed to further explore this potentially important finding. View Full-Text
Keywords: Celiac Disease; depression; gluten-free diet; dietary adherence Celiac Disease; depression; gluten-free diet; dietary adherence
►▼ Show Figures 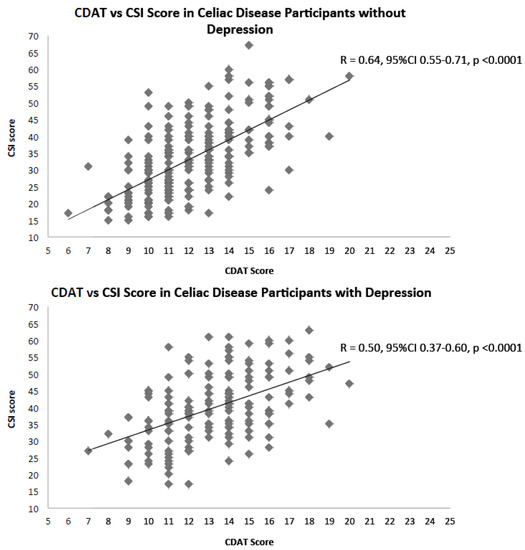 
Joelson AM, Geller MG, Zylberberg HM, Green PHR, Lebwohl B. The Effect of Depressive Symptoms on the Association between Gluten-Free Diet Adherence and Symptoms in Celiac Disease: Analysis of a Patient Powered Research Network. Nutrients. 2018; 10(5):538. https://doi.org/10.3390/nu10050538