Diet Quality and Sarcopenia in Older Adults: A Systematic Review
Next Article in Special Issue

Dietary Magnesium Intake and Hyperuricemia among US Adults

Coronary heart disease (CHD) is one of the most prevalent and high-impact complications related to type 2 diabetes mellitus (T2D) [1,2]. In the general population, magnesium (Mg) deficiency might be associated with a greater risk of CHD; however, data on the inverse associations between Mg status and intake and CHD are inconsistent [3,4,5,6,7,8,9]. In T2D, the prevalence of hypomagnesemia is increased 14–48%, compared with 3–15% in those without T2D [10,11]. This could partly be due to increased urinary Mg excretion caused by insulin resistance, and partly due to poor dietary Mg intake [10,11,12,13]. However, surprisingly few studies report on the association between Mg and CHD in patients with established T2D [14,15].
In the DIAbetes and LifEstyle Cohort Twente (DIALECT), we collected extensive data on dietary Mg intake, 24 h urinary Mg excretion, and plasma Mg concentration. We aimed to study the association between the parameters of Mg (i.e., dietary Mg intake, 24 h urinary Mg excretion, and serum Mg concentration) and CHD. When we found that dietary Mg intake was inversely associated with CHD risk, we also explored whether there was an association between Mg intake from specific dietary sources (i.e., cereals, potatoes, etc.) and CHD risk.

This was a cross-sectional analysis performed in the DIAbetes and LifEstyle Cohort Twente-1 (DIALECT-1). The study population and study procedures have been described previously [16]. The study has been approved by the relevant institutional review boards (METC-Twente, NL57219.044.16; METC-Groningen, 1009.68020), is registered in the Netherlands Trial Register (NTR trial code 5855), and is performed according to the guidelines of good clinical practice and the declaration of Helsinki.

All patients with T2D treated in the outpatient clinic of our hospital, aged 18+ years, were eligible for the study. Exclusion criteria were inability to understand the informed consent procedure, insufficient command of the Dutch language, or dialysis dependency. The inclusion flowchart has been described previously [16]. In total, 1082 patients were eligible for the study, of which 470 agreed to participate. The most important reasons for non-participation were no interest in the trial (n = 123), inability due to co-morbidity (n = 62), and no transport options (n = 58). After the baseline visit, 20 patients were excluded due to the fact that their diabetes diagnosis changed from type 2 diabetes to type 1 diabetes. Therefore, a total of 450 patients with type 2 diabetes were included in DIALECT-1. Missing values for specific variables are listed in Table 1.

Eligible patients with type 2 diabetes were selected from the electronic patient file. At the clinic, sociodemographic characteristics, medical history, lifestyle behaviors, and current medications were recorded and anthropometric dimension were measured. Blood pressure was measured in a supine position by an automated device (Dinamap®; GE Medical systems, Milwaukee, WI, USA) for 15 min with a one-minute interval. The mean systolic and diastolic pressure of the final three measurements was used for further analysis. Physical activity was assessed using the Short QUestionnaire to ASses Health enhancing physical activity (SQUASH) questionnaire, which was previously validated and is commonly used in the Netherlands for population research [17].
Blood was drawn from venipuncture, for measurement of Mg and other variables relevant for diabetes. 24-h urine collections were performed as prescribed previously [16]. Samples of blood and urine were stored at −80 °C for later analysis.

We calculated dietary Mg intake using a semi-quantitative food frequency questionnaire (FFQ), inquiring about the intake of 177 items during the last month, taking seasonal variations into account [18]. The FFQ was developed and validated at the Wageningen University, and has been updated several times. For each food item, the frequency was recorded in times per day, week, or month. The number of servings was expressed in natural units (e.g., a slice of bread or a whole apple) or household measures (e.g., cup or spoon). Both questionnaires were self-administered and filled in at home. The filled-in questionnaires were checked for completeness by a trained researcher, and inconsistent answers were verified with the patients. If the patient could not remember an exact number, the trained researcher approximated the intake as closely as possible during the interview. Dietary data was converted into daily nutrient intake using the Dutch Food Composition Table of 2013 [19]. We calculated the average intake of Mg by multiplying the frequency of consumption of each food item by its Mg content in the Dutch Food Composition Table of 2013 [19], and summing the amount of Mg across all food items. We calculated Mg intake from different food categories by multiplying the frequency of consumption of each food item in that specific category by its Mg content, and summing across all food items in that category. Food items of the FFQ included in each category are listed in supplementary Table S1.
Plasma and urinary Mg were measured in stored plasma samples in routine laboratory measurements using the xylidyl blue method. Buffer/Ethylenediaminetetraacetic acid was added to mask calcium. After incubation, xylidyl blue was added to form a purple complex with Mg. Mg concentration was determined by the photometric measurement of xylidyl blue extinction. The detection range for plasma Mg was 0.1–5 mmol/L, and for 24 h urinary Mg the range was 0.5–25 mmol/L. There were no patients with values outside of the detection ranges. Hypomagnesemia was defined as serum Mg concentration <0.70 mmol/L.

Coronary heart disease (CHD) is defined as physician-diagnosed unstable angina pectoris or myocardial infarction, percutaneous coronary intervention, or a coronary artery bypass graft in the medical history. Medical history was checked for CHD during the interview at the baseline visit, and was later reviewed in the hospital electronic patient files on three different occasions, by three different physician researchers, who were unware of the magnesium data.

All statistical analyses were performed using the Statistical Package for the Social Sciences (SPSS), version 23.0. Normally-distributed data are presented as mean ± standard deviation. Skewed variables are expressed as median (interquartile range). Dichotomous variables are presented in number and percentage. Dietary intake of Mg was adjusted for energy intake by the residual method [20].
Differences between T2D patients with and without CHD were determined using the Student t (normal distribution), Mann–Whitney U (skewed distribution), or Chi-Square (categorical variables) test. In order to examine parameters associated with magnesium intake, we divided the population into sex-specific quartiles of adjusted magnesium intake. Differences between the quartiles were assessed using one-way ANOVA (normal distribution), Kruskal–Wallis (skewed distribution), or Chi-Square (categorical variables) analysis.
Correlations between Mg parameters were assessed using Pearson’s correlation coefficient.
We calculated the prevalence ratio (95% CI) of CHD by sex-specific quartiles of (1) dietary Mg intake; (2) 24 h urinary Mg excretion; and (3) plasma Mg concentration, using multivariable Cox proportional hazard models, with the time to event set at 1 for all patients. The models were adjusted for the potential confounding of lifestyle parameters (BMI, smoking, alcohol, and physical activity) and nutritional intake (24 h urinary sodium excretion and 24 h urinary potassium excretion) [3,21]. There was a strong correlation between dietary calcium and Mg intake (R = 0.70), therefore we did not adjust for calcium intake in the final model. Effect modification was checked for gender, BMI, smoking, and alcohol, and no significant effect modification was found (p > 0.20 for all interaction terms). Sensitivity analyses were performed by excluding patients with diabetic kidney disease, and prevalence ratios were similar as in the primary analyses.
Additionally, we performed multivariable Cox proportional hazard models, and calculated the prevalence ratios of CHD for each 10 mg increment of dietary Mg intake from different sources (cereals, dairy, coffee, potatoes, meat, legumes and nuts, fruit, vegetables, and other). The models were adjusted for potential confounding of lifestyle parameters (age, BMI, smoking, alcohol, and physical activity) and Mg intake from the miscellaneous sources.

The highest quartile of Mg intake was significantly associated with a lower prevalence ratio (PR) of CHD than the lowest quartile of Mg intake (0.40 (0.20, 0.77); Table 2). When adjusting for age and lifestyle parameters (BMI, smoking, alcohol, and physical activity), the PR remained largely unchanged (0.42 (0.22, 0.82)). After adjustment for dietary intake of other micronutrients (total energy intake, sodium, and potassium), the PR became (0.40 (0.20, 0.79)), and the p-trend was 0.01.
There was a similar trend towards a lower prevalence of CHD in the highest quartile of 24 h urinary Mg excretion, which was not statistically significant (PR 0.63 (0.33, 1.19)). After adjustment for lifestyle and nutritional factors, the PR remained similar (0.63 (0.32, 1.26)). Also, the highest quartile of plasma Mg concentration had a non-significant trend towards a lower prevalence of CHD (unadjusted PR 0.60 (0.31, 1.14), adjusted PR 0.62 (0.32, 1.20)). The PR ratios for dietary Mg intake, urinary Mg excretion and plasma Mg concentration did not change after further adjustment for other classic CHD risk factors, namely systolic blood pressure and LDL cholesterol (data not shown).

3.2. Analysis on Source of Magnesium Intake and Prevalence of CHD

The following are available online at https://www.mdpi.com/2072-6643/10/3/307/s1, Table S1: Overview of food items included in each food category, Table S2: Baseline characteristics of patients with T2D by a breakup of dietary magnesium intake. 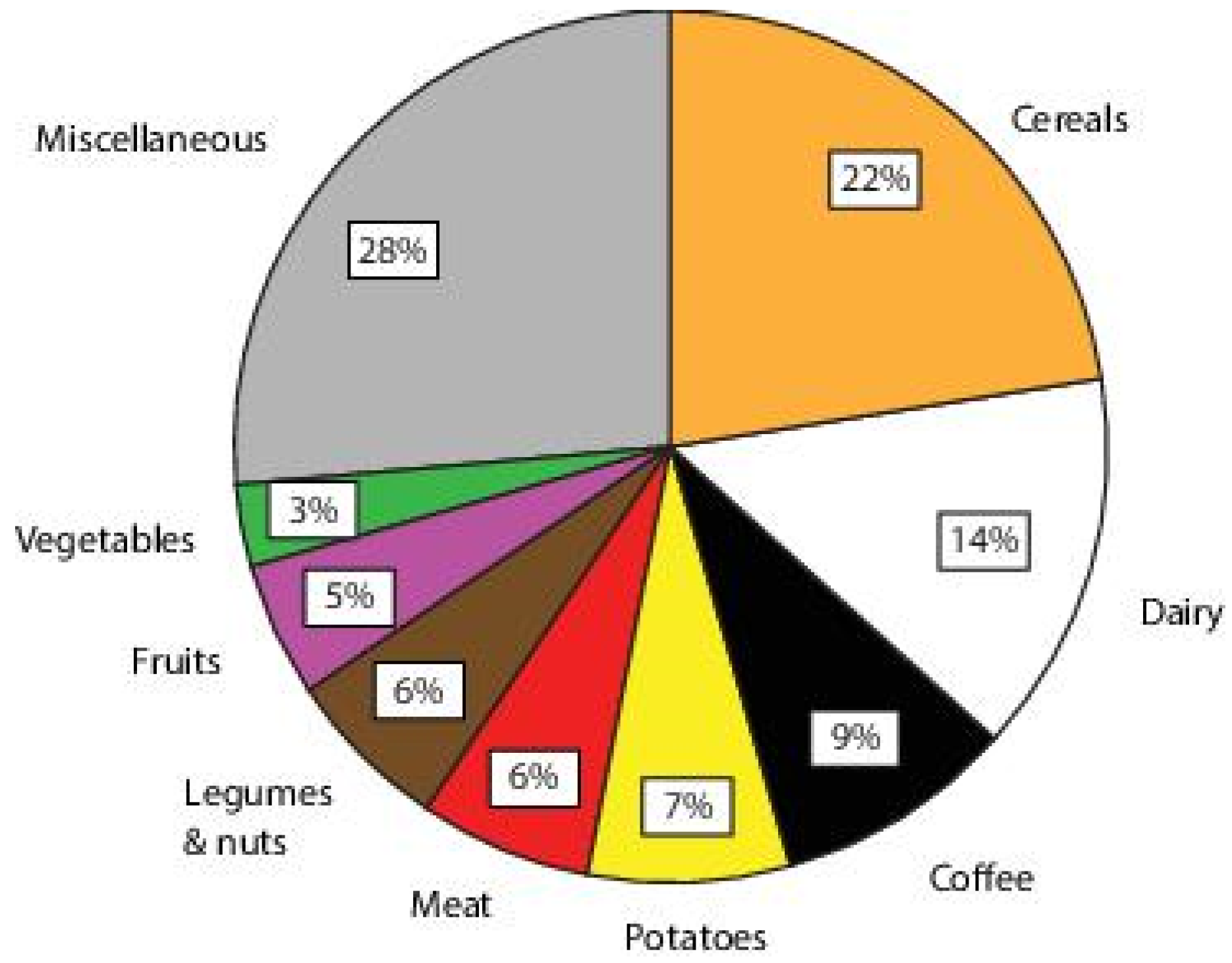