The Effect of Processing and Seasonality on the Iodine and Selenium Concentration of Cow’s Milk Produced in Northern Ireland (NI): Implications for Population Dietary Intake

The sampling method used was designed to be representative of cow’s milk sold at retail in NI. Milk samples were collected from May 2013 to April 2014 on a weekly basis from two of the largest creameries in NI. Samples (1 L) of skimmed, semi-skimmed, whole and unpasteurised milk were obtained on each occasion. A total of 376 samples were collected, kept chilled and transferred to Ulster University Coleraine where they were stored at −20 °C prior to analysis. Weekly samples from the two creameries were then pooled to create monthly samples of each milk type (skimmed, semi-skimmed and whole). The monthly milk samples of skimmed (n = 12), semi-skimmed (n = 12), whole milk (n = 12) and unpasteurised (n = 12) were then grouped together to create seasonal samples (Spring: March–May; Summer: June–August; Autumn: September–November; Winter: December–February). To investigate the differences in iodine and selenium concentrations between winter and summer milk as described by others [37], winter/indoor period was defined as milk collected between December–March and summer/outdoor period as milk collected between June and October. For the purposes of this analysis, skimmed, semi-skimmed and whole milk samples constitute the pasteurised milk samples (n = 36) and unpasteurised samples (n = 12) were those collected pre-pasteurisation and pre-homogenisation.

To extract iodine and selenium prior to analysis, milk samples were digested. For iodine determination, 0.5 mL of milk was added to 5 mL of 5% tetramethylammonium hydroxide (TMAH) (>99%, Acros Organics, Loughborough, UK). Samples were placed in the oven at 90 °C for 3 h. Samples were removed from the oven to cool and 0.5 mL of 1300 ng/g tellurium, an internal standard (Sigma Aldrich, Dorset, UK) in 1% TMAH was added and samples were made up to 50 g with 1% TMAH. For selenium determination, 3 g of milk was added to 1 mL high purity water and 6 mL concentrated nitric acid (VWR International, Leicestershire, UK). Samples were pre-heated for 10 min on a thermal plate before being placed in a Transform 680 Microwave Digestion System (Aurora, Vancover, BC, Canada). Following digestion, samples were cooled and 1.5 mL of 30% hydrogen peroxide added (Sigma Aldrich, Dorset, UK). Samples were made up to 50 g with high-purity water.

2.3. Iodine and Selenium Analysis of Milk

The milk digests were shipped to LGC, Teddington, Middlesex, UK, for analysis. The iodine and selenium concentrations of milk were determined by inductively coupled plasma-mass spectrometry (ICP-MS) with 8800 ICP-QQQ-MS (Triple Quadrupole ICP-MS) (Agilent Technologies, Cheshire, UK). For iodine determination the instrument was operated in standard single quadrupole mode as iodine and tellurium do not suffer from interferences. All glassware (nebuliser, spray chamber and injector) were soaked overnight in 5% TMAH and rinsed with ultrapure water. The torch position, sample gas flow and lenses were optimised to ensure maximum signal intensity. For selenium analysis the instrument was operated in tandem mass spectrometry (MS/MS) mode using the H2 gas mode to effectively remove possible interferences on selenium.
To ensure maximum accuracy, external calibration was undertaken using a stock standard, prepared gravimetrically from high purity potassium iodide (>99.99%, Alfa Aesar, Leicestershire, UK) dissolved in 5% TMAH (Sigma Aldrich, Dorset, UK) for iodine determination and for selenium analysis a stock standard containing 995 μg/g Se in 5% HNO3 (VHG Labs, Manchester, NH, USA) was used to prepare calibration standards. The uncertainty of the method for selenium analysis was calculated as ±10% using International Organisation for Standardisation (ISO) methodology [38] and was calculated to be ±15% for iodine [38]. Certified reference materials (CRM) were used to expose any systemic errors in the analysis. For this analysis ERM-BD150 (LGC Standards, Teddington, UK) was used. The certified value for selenium was 0.19 mg/kg and for iodine was 1.78 mg/kg. For each analysis 3 samples of the CRM were measured. The mean selenium value for the CRM was 0.18 mg/kg, a recovery of 96.5%. The mean iodine value for the CRM was 1.92 mg/kg, a recovery of 107.9%. The limit of detection (LOD) and limit of quantification (LOQ) for the analysis of milk iodine concentrations were 4.96 μg/L and 19.85 μg/L respectively. The LOD and LOQ for the analysis of milk selenium concentrations were 1.33 μg/L and 3.83 μg/L respectively.

Data was obtained from the National Diet and Nutrition Survey (NDNS) Rolling Programme Years 1–4 (2008/2009–2011/2012) which provided nationally representative data on typical milk consumption (g/day) and iodine and selenium dietary intakes (µg/day) for the UK population [39]. Dietary data were collected for a total of 16,539 diary days from a total of 4156 participants who provided three or four day estimated weight food diaries [40].
The mean (12 months) iodine and selenium values for pasteurised (skimmed, semi-skimmed and whole) NI milk as measured in this study were applied to current NDNS milk consumption data. From this the daily iodine and selenium intakes from milk were simulated and comparisons were made between estimated intakes using NI milk data and estimated intakes as reported in the NDNS [21].
The theoretical impact of consuming NI milk on iodine and selenium intakes was evaluated for the entire NDNS population and by age group (1.5–3 years; 4–6 years; 7–10 years; 11–14 years; 15–17 years; 18–45 years; >46 years). Particular focus was given to groups thought to be most prone to low iodine intakes (girls aged 11–17 years and women of childbearing age 18–45 years) [10,12]. Following the dietary modelling, the estimated total daily iodine and selenium intakes (as estimated in NDNS using Food Standards Agency (FSA) (2002) data [23] or data from the current study) were compared to age and/or sex-specific dietary reference values for iodine and selenium (including the lower reference nutrient intake (LRNI), reference nutrient intake (RNI) and tolerable upper limit (TUL)) [41,42].

Statistical analysis was conducted using Statistical Package for Social Sciences (SPSS) version 22 (International Business Machines (IBM), Chicago, IL, USA). Normality was assessed using the Shapiro-Wilks test. Results for non-parametric data are presented as median (25th–75th percentile). Results for parametric data are presented as mean and standard deviation (SD). A p-value of <0.05 was considered statistically significant throughout. One-way analysis of variance (ANOVA) (with Bonferroni correction for post hoc analysis) were used to assess any differences in the iodine and selenium concentration between types of milk and season. Independent t-tests were used to compare total milk intake (g/day) between children (1.5–17 years) and adults (≥18 years), and between males and females. Wilcoxon Signed Rank Tests were used to compare differences in iodine and selenium intake as estimated in NDNS using FSA (2002) data [23] or data from the current study. To compare the differences in theoretical iodine intakes from milk across seasons using the concentrations measured in the current study, the Friedman test was conducted.

3.1. Iodine and Selenium Concentrations of Milk

3.3. Theoretical Influence of Milk Consumption and Season on Iodine and Selenium Intakes

The measured iodine and selenium concentrations of NI milk were higher than expected based on a comparison to the most recent UK estimates for milk [23,43]. This finding suggests that frequent monitoring of milk samples produced across the UK is warranted to allow more accurate estimates of the contributions of milk to nutrient intakes to be assessed. The dietary modelling approach taken in this study confirmed that milk makes an important contribution to iodine and selenium intakes, and this contribution may be higher than previously estimated if iodine and selenium concentrations measured in the present study were replicable across the whole of the UK at the current level of milk consumption. Iodine intakes were theoretically shown to vary by season concurrent with the seasonal variation in NI milk iodine concentrations. Routine monitoring of milk iodine concentrations is important and efforts should be made to understand reasons for fluctuations in milk iodine concentrations, in order to realise the nutritional impact to consumers. This is particularly important for iodine, as deficiency remains a public health issue in the UK and Ireland.

The authors thank both creameries for providing milk samples for this study. SMO’K was in receipt of a postgraduate studentship from the Department of Agriculture, Environment and Rural Affairs (DAERA), which funded this research. DAERA had no role in the design, analysis or writing of this article. We also wish to acknowledge the contribution of the staff and participants of the NDNS for the milk consumption data. 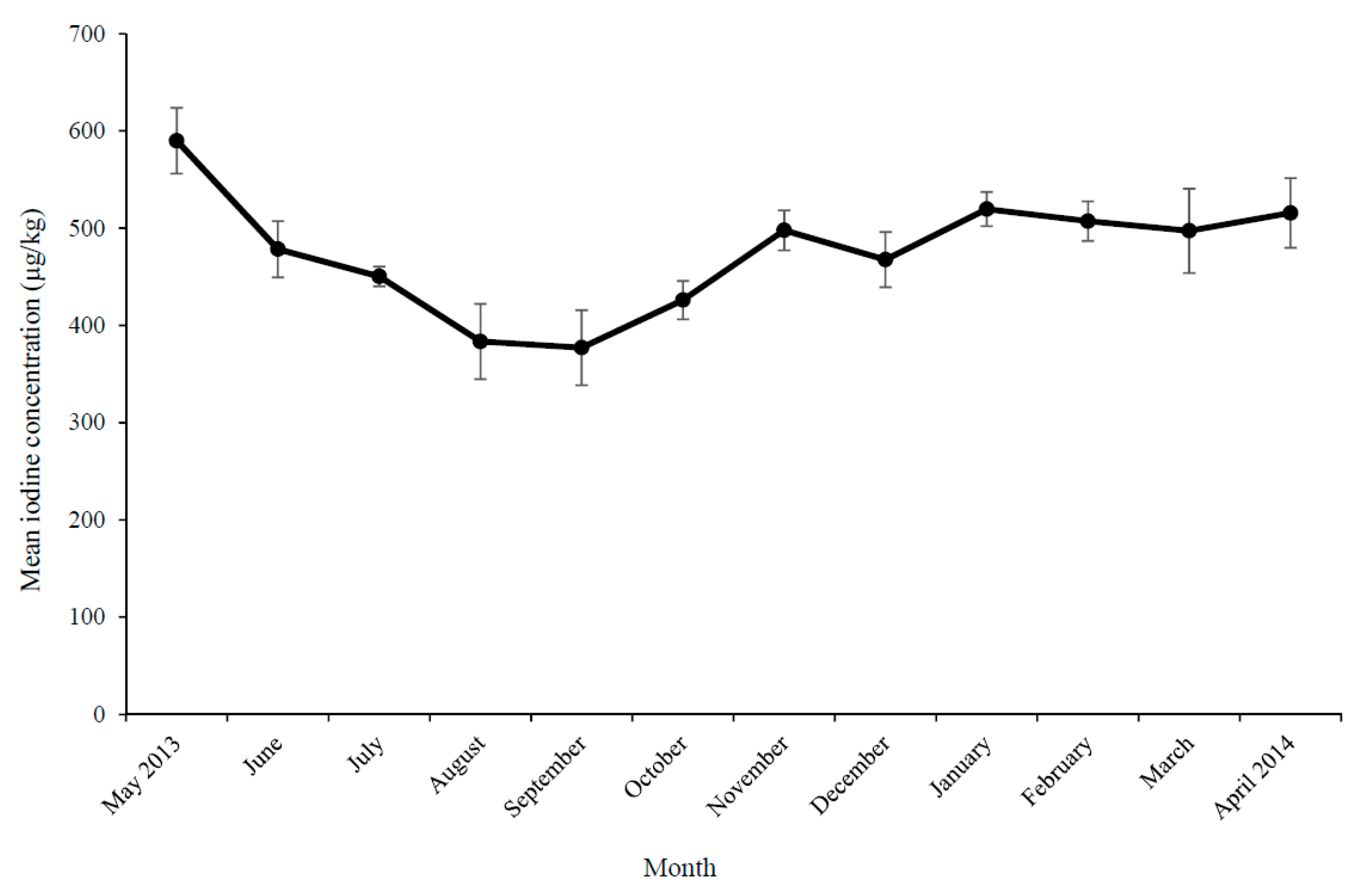