Nutrition in the Very Old
Previous Article in Special Issue

Healthiness of Food and Beverages for Sale at Two Public Hospitals in New South Wales, Australia

The Impact of a Single Dose of a Polyphenol-Rich Seaweed Extract on Postprandial Glycaemic Control in Healthy Adults: A Randomised Cross-Over Trial

This study investigated the impact of a polyphenol-rich seaweed extract on postprandial glycaemia in healthy adults, and, as a secondary outcome, the influence of ethnicity on these outcomes. Thirty-eight volunteers (26 non-Asian, 12 Asian) aged 19 to 56 years participated in this double-blind, placebo-controlled, randomised cross-over trial. Participants each consumed a low (500 mg), and high (2000 mg) dose of the polyphenol-rich brown seaweed (Fucus vesiculosus) extract, as well as a cellulose placebo (2000 mg), 30 min prior to 50 g of available carbohydrate from white bread. Postprandial blood glucose and plasma insulin concentrations were measured over two hours (fasting, 15, 30, 45, 60, 90, and 120 min) from a finger prick blood sample. Data were analysed using a repeated measures analysis of variance. Compared with the placebo, neither dose had a lowering effect on postprandial glucose or insulin responses. However, individuals of an Asian background experienced consistently elevated plasma insulin responses, assessed using an incremental area under the curve, compared with non-Asian participants, irrespective of supplement (p = 0.016). These results suggest an increased risk of insulin resistance among Asian populations, compared with non-Asian, and that measurement of blood glucose levels alone may be insufficient to diagnose diabetes risk in this population. View Full-Text
Keywords: functional food; phlorotannin; polyphenol; diabetes; glucose; insulin; ethnicity functional food; phlorotannin; polyphenol; diabetes; glucose; insulin; ethnicity
►▼ Show Figures 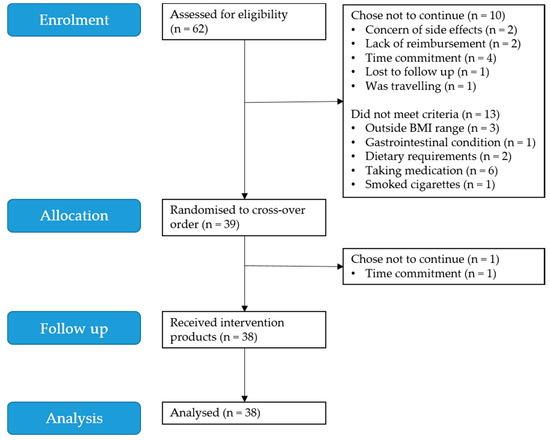