Copper-Fructose Interactions: A Novel Mechanism in the Pathogenesis of NAFLD
Next Article in Special Issue

Weight loss, induced by chronic energy deficit, improves the blood lipid profile. However, the effects of an acute negative energy balance and the comparative efficacy of diet and exercise are not well-established. We determined the effects of progressive, acute energy deficits (20% or 40% of daily energy requirements) induced by a single day of calorie restriction (n = 19) or aerobic exercise (n = 13) in healthy subjects (age: 26 ± 9 years; body mass index (BMI): 21.8 ± 2.9 kg/m2). Fasting plasma concentrations of very low-, intermediate-, low-, and high-density lipoprotein (VLDL, LDL, IDL, and HDL, respectively) particles and their subclasses were determined using nuclear magnetic resonance. Total plasma triglyceride and VLDL-triglyceride concentrations decreased after calorie restriction and exercise (all p ≤ 0.025); the pattern of change was linear with an increasing energy deficit (all p < 0.03), with no evidence of plateauing. The number of circulating large and medium VLDL particles decreased after diet and exercise (all p < 0.015), with no change in small VLDL particles. The concentrations of IDL, LDL, and HDL particles, their relative distributions, and the particle sizes were not altered. Our data indicate that an acute negative energy balance induced by calorie restriction and aerobic exercise reduces triglyceride concentrations in a dose-dependent manner, by decreasing circulating large and medium VLDL particles.
Keywords: lipoproteins; triglyceride; cholesterol; negative energy balance lipoproteins; triglyceride; cholesterol; negative energy balance

Cardiovascular disease (CVD), especially ischemic heart disease and stroke, is the leading cause of mortality worldwide, accounting for approximately one-third of global deaths [1]. Disturbances in lipid metabolism leading to unfavorable changes in the plasma lipid profile—such as increases in triglyceride concentration and small, dense low-density lipoprotein (LDL) particles, increases in total and LDL-cholesterol concentrations, and decreases in high-density lipoprotein (HDL) cholesterol concentration—can augment the risk of CVD [2].
The primary management for CVD currently involves lowering LDL-cholesterol concentration with drugs [3]. However, the beneficial effect of cholesterol-lowering therapy by using statins is no greater than 30%, which indicates that other important risk factors need to be taken into account [4]. Lifestyle factors, such as diet and physical activity, are often overlooked but are key to reducing CVD risk [5,6]. Weight loss, which involves tipping the balance between energy intake and energy expenditure to achieve a state of negative energy balance, has been shown to improve the blood lipid profile (lower triglyceride, total and LDL-cholesterol concentrations), in conjunction with a reduction in total body fat, intra-abdominal fat, and ectopic fat accumulation [7,8,9,10]. Clearly, however, diet and exercise can affect lipid metabolism acutely, even after just a single day and in the absence of weight loss [11,12]. The degree of negative energy balance that needs to be achieved to improve lipid metabolism, as well as possible dose-response relationships between a negative energy balance and the plasma lipid profile, remain elusive. Also, little is known about the comparative efficacy of the same energy deficit achieved by restricting energy intake or increasing energy expenditure.
This study was therefore aimed at evaluating the lipoprotein subclass profile, by using nuclear magnetic resonance (NMR) spectroscopy, after a single day of progressive negative energy balance (20% and 40% of daily energy requirements), induced by calorie restriction (CR) or aerobic exercise (EX). Lipoproteins vary in particle size and number, and assessing the lipoprotein subclass profile offers a valuable insight into CVD risk, beyond that captured by traditional risk factors such as triglyceride and cholesterol levels. Increased CVD risk has been associated with increased numbers of small dense LDL [13,14,15], large very low-density lipoproteins (VLDL), and small HDL [16]. Therefore, characterizing the changes in lipoprotein subclass profile is necessary to better understand the effects of diet and exercise on lipid metabolism, and thereby help design effective lifestyle interventions targeted at preventing CVD.

The subjects visited the laboratory in the morning, after having fasted overnight, and having abstained from strenuous exercise, alcohol, and caffeine on the previous day. Fat mass and fat-free mass were determined using dual-energy X-ray absorptiometry (DXA) on a Discovery QDR Series DEXA scanner (Hologic, Bedford, MA, USA). Following 30 min of bed rest, they had their oxygen consumption and carbon dioxide production measured continuously for 30 min, while breathing under a ventilated hood, and their resting metabolic rate (RMR) was determined using indirect calorimetry (Quark RMR; COSMED, Rome, Italy).

For all three experimental visits, which were scheduled ~1 week apart, the subjects visited the laboratory in the morning (~8 am on day 1), after having fasted overnight. They were instructed to abstain from alcohol and caffeine consumption on the previous day (day 0), and from performing any strenuous exercise on the preceding 3 days (to avoid potential delayed metabolic effects of exercise). The subjects recorded all the food and drink they had consumed on the day before they came to the laboratory (i.e., day 0) for their first metabolic testing visit and were instructed to replicate the same diet on the day preceding the remaining visits. All the subjects confirmed that they followed the diet prescription during their subsequent admissions; some minor deviations were not deemed important. On all occasions, vital signs (temperature, heart rate, and blood pressure) were obtained after 30 min of bed rest, and before any testing began. During day 1, the subjects remained in the laboratory and ate and rested or exercised according to the study protocol and trial (Figure 1). They were discharged after eating dinner on day 1, and were instructed to refrain from all food and drink and physical activity until they returned to the laboratory the next morning (~8 am on day 2) after having fasted overnight, when fasting blood samples were obtained from a forearm vein.

Daily energy requirements for weight maintenance (i.e., isocaloric diet) were estimated for each subject by multiplying resting energy expenditure (i.e., RMR, measured at screening) by a factor of 1.4 [17]. Two meals (breakfast, served at 9 am, and dinner, served at 7 pm) were provided during each trial; the total energy content of those meals was equivalent to 60% of the total calculated daily energy requirements for weight maintenance (i.e., 20% at breakfast and 40% at dinner). These two meals were identical in all three trials (breakfast: turkey breast sandwich with soya milk; dinner: teriyaki chicken rice with mixed vegetables and peaches). Two snacks (tuna sandwich with orange juice) were given in the morning and afternoon to provide the additional energy required for weight maintenance (i.e., 20% at each snack, for a total of 40%). Subjects in the CR group rested during the morning and afternoon of day 1 and consumed either an isocaloric diet (control, CR-0) or a progressively energy deficient diet by withholding the first (20% calorie restriction, CR-20) or both (40% calorie restriction, CR-40) snacks.
Subjects in the EX group consumed an isocaloric diet during day 1 and either rested or performed aerobic exercise (two bouts, performed at approximately the same times as the two resting periods; Figure 1) to expend an amount of calories equivalent to 20% (EX-20) or 40% (EX-40) of their daily energy requirements for weight maintenance. Exercise was performed on a cycloergometer (Wattbike Trainer, Woodway, Rhein, Germany) at submaximal intensity, and the duration varied accordingly to expend the targeted amount of calories. Resistance varied so that the heart rate was within 60–80% of the maximum heart rate (HRmax) and cadence was maintained at 60–80 rpm. Gross energy expenditure was calculated using a prediction equation utilizing age, sex, weight, and heart rate during exercise [18], and net energy expenditure was calculated by subtracting RMR for the duration of the bout. The three experimental trials in each group were performed in random order. All meals were prepared in our metabolic kitchen. Each meal or snack contained 55% of total energy as carbohydrate, 27% as fat, and 18% as protein, so the relative composition of the daily diet was the same in both groups and all trials. This design made it possible to induce a progressively increasing negative energy balance (equal to 20% and 40%) by restricting dietary intake (CR group) or by increasing energy expenditure (EX group), at approximately the same time of the day, while keeping the last meal and the duration of fasting before metabolic testing the same (Figure 1).

Prior to all the statistical analyses, the distributional properties of the outcome measures were evaluated for normality using the Shapiro-Wilks test. Parametric tests were used for normally distributed data, and non-parametric tests (based on ranks) were used for non-normally distributed data. The primary goal of our study was to determine the effects of progressively increasing energy deficit induced by calorie restriction or aerobic exercise on plasma lipoproteins. This was accomplished using an analysis of variance for repeated measures within each study group. Statistically significant models were followed by: (i) trend analysis to describe the pattern of change in the outcome with a progressively increasing negative energy balance (i.e., linear or quadratic); and (ii) simple contrasts to compare each level of energy deficit against the control trial. All these analyses were preceded by preliminary between-group comparisons using the Student’s unpaired t test (or the Mann-Whitney U test) and the χ2 test, which confirmed that there were no significant differences between the CR and the EX groups in key prognostic and demographic variables at baseline. Statistical significance was accepted at p ≤ 0.05. Results are shown as means with standard errors, unless otherwise noted. Statistical analysis was performed using SPSS version 23 (IBM SPSS, Chicago, IL, USA).

There were no significant differences between the groups in terms of baseline lipid and lipoprotein concentrations and lipoprotein subclass profile (Table 2). The total plasma triglyceride and VLDL-triglyceride concentrations decreased after calorie restriction (both p ≤ 0.025) and exercise (both p ≤ 0.001); the pattern of change was linear (all p < 0.03) with no evidence of plateauing (i.e., no significant quadratic component, Table 2). Exercise did not affect HDL-cholesterol concentration (p = 0.913), but calorie restriction caused a marginally significant decrease (p = 0.049); however, none of the pairwise contrasts against the control trial reached significance (Table 2).
The reduction in triglyceride concentrations after CR and EX was accompanied by significant decreases in the number of circulating large and medium VLDL particles (all p < 0.015), with no change in small VLDL particles (p > 0.64, Table 2). This resulted in a shift in the percent distribution of VLDL towards smaller particles (Figure 2), but the average VLDL particle size did not change significantly (Table 2). The concentrations of IDL, LDL, and HDL particles (total and subclasses), their relative distributions, and the average LDL and HDL sizes were not significantly affected by 20% or 40% energy deficits induced by CR or EX (Table 2 and Figure 2).

This study was supported by award BMSI/16-07803C-R20H from the Singapore Institute for Clinical Sciences (SICS), Agency for Science, Technology and Research (A*STAR), Singapore.

The authors would like to thank the study subjects for their participation. 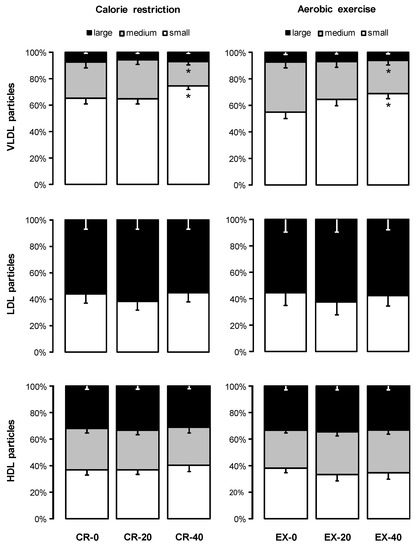