The Timing of Activity after Eating Affects the Glycaemic Response of Healthy Adults: A Randomised Controlled Trial
Previous Article in Journal

The satiating capacity of carbohydrate staples eaten alone is dependent upon the energy density of the food but relative satiety when starchy staples are incorporated into mixed meals is uncertain. Our aim was to assess the satiating effects of three carbohydrate staples; jasmine rice, penne pasta, and Agria potato, each consumed within a standard mixed meal. Cooked portions of each staple containing 45 g carbohydrate were combined with 200 g of meat sauce and 200 g of mixed vegetables in three mixed meals. The quantities of staple providing 45 g carbohydrate were: Rice, 142 g; pasta, 138 g and potato 337 g. Participants (n = 14) consumed each of the mixed meals in random order on separate days. Satiety was assessed with using visual analogue scales at baseline and for 3 h post meal. In an area-under-the-curve comparison, participants felt less hungry (mean (SD)) following potato 263 (230) than following rice 374 (237) or pasta 444 (254) mm∙min, and felt fuller, more satisfied, and wanted to eat less following the potato compared with the rice and pasta meals (p for all <0.01). The superior satiating effect of potato compared with rice and pasta in a mixed meal was consistent with its lower energy density. View Full-Text
Keywords: carbohydrate; satiety; mixed meal; potato; pasta; rice carbohydrate; satiety; mixed meal; potato; pasta; rice
►▼ Show Figures 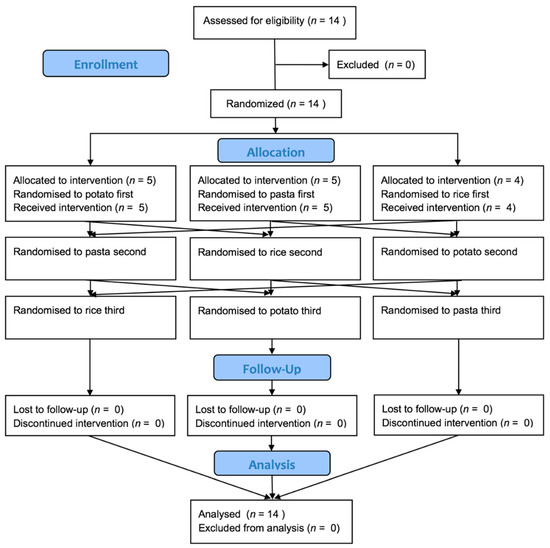