Spices and Atherosclerosis
Next Article in Special Issue

A Randomized, Placebo-Controlled, Pilot Clinical Trial to Evaluate the Effect of Supplementation with Prebiotic Synergy 1 on Iron Homeostasis in Children and Adolescents with Celiac Disease Treated with a Gluten-Free Diet
Previous Article in Journal

Rationale of Probiotic Supplementation during Pregnancy and Neonatal Period

Therapeutic Microbiology: The Role of Bifidobacterium breve as Food Supplement for the Prevention/Treatment of Paediatric Diseases

The human intestinal microbiota, establishing a symbiotic relationship with the host, plays a significant role for human health. It is also well known that a disease status is frequently characterized by a dysbiotic condition of the gut microbiota. A probiotic treatment can represent an alternative therapy for enteric disorders and human pathologies not apparently linked to the gastrointestinal tract. Among bifidobacteria, strains of the species Bifidobacterium breve are widely used in paediatrics. B. breve is the dominant species in the gut of breast-fed infants and it has also been isolated from human milk. It has antimicrobial activity against human pathogens, it does not possess transmissible antibiotic resistance traits, it is not cytotoxic and it has immuno-stimulating abilities. This review describes the applications of B. breve strains mainly for the prevention/treatment of paediatric pathologies. The target pathologies range from widespread gut diseases, including diarrhoea and infant colics, to celiac disease, obesity, allergic and neurological disorders. Moreover, B. breve strains are used for the prevention of side infections in preterm newborns and during antibiotic treatments or chemotherapy. With this documentation, we hope to increase knowledge on this species to boost the interest in the emerging discipline known as “therapeutic microbiology”. View Full-Text
Keywords: Bifidobacterium breve; probiotics; paediatrics; therapeutic microbiology Bifidobacterium breve; probiotics; paediatrics; therapeutic microbiology
►▼ Show Figures 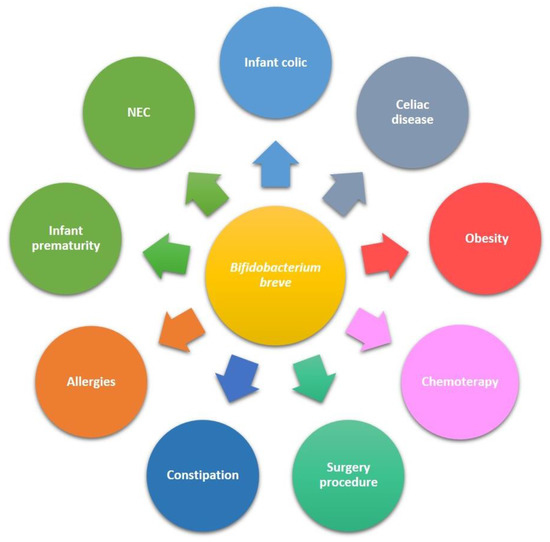