Examining Associations between Body Mass Index in 18–25 Year-Olds and Energy Intake from Alcohol: Findings from the Health Survey for England and the Scottish Health Survey
Next Article in Special Issue

Alleviation of Irritable Bowel Syndrome-Like Symptoms and Control of Gut and Brain Responses with Oral Administration of Dolichos lablab L. in a Mouse Model

Inhibiting the onset of arteriosclerotic disease, which has been increasing due to the westernized diet and aging, is a significant social challenge. Curcumin, a type of polyphenol, has anti-oxidative effects and anti-inflammatory action and is expected to treat and to have prophylactic effects on different diseases. In this study, we examined the effects of long-term administration of curcumin on vascular aging and chronic inflammation—the causes of arteriosclerotic disease. Eight-week-old C57BL/6J mice were fed with high fat diet (HFD) or 0.1% curcumin-mixed HFD (HFD + Cu) until 80 weeks old (n = 20 for each group). After the breeding, we examined the expression of antioxidant enzymes, heme oxygenase-1 (HO-1), oxidative stress, vascular aging, and inflammatory changes in the aorta. In the HFD group, oxidative stress increased with decreased sirt1 expression in the aorta followed by increased senescent cells and enhanced inflammation. Whereas in the HFD + Cu group, HO-1 was induced in the aorta with the suppression of oxidative stress. Additionally, it was shown that sirt1 expression in the aorta in the HFD + Cu group remained at a level comparable to that of the 8-week-old mice with suppression of increased senescent cells and enhanced inflammation. Consequently, disorders associated with HFD were resolved. These results suggest that curcumin might be a food with a prophylactic function against arteriosclerotic disease.
Keywords: curcumin; high-fat diet; senescence; inflammation; heme oxygenase curcumin; high-fat diet; senescence; inflammation; heme oxygenase

Aging is a risk factor for arteriosclerotic disease, which is the same in Europe, America, and Japan. Different epidemiological studies have shown that the increase in the older age group is associated with an increased risk of arteriosclerotic disease [1,2,3]. Moreover, in Japan, fat intake has been increasing as the dietary pattern has become westernized. This increase in fat-derived energy intake has been reported as a possible risk factor for arteriosclerotic disease [4,5,6,7]. Obesity and glycolipid metabolism disorder induced by this increased fat intake trigger oxidative stress characterized by increased reactive oxygen species and decreased anti-oxidative function as well as inflammatory reaction associated with abnormal secretions of adiponectin and inflammatory cytokines, which leads to the onset of arteriosclerotic disease [8,9,10,11,12,13,14]. Since preventing the onset and inhibiting the recurrence of arteriosclerotic disease are significant social challenges in Japan—a country with a super-aging society and an increasingly westernized diet—the expectations and efficacy of different functional foods on disease prevention and treatment have been actively studied [15,16,17].
Curcumin, a main component of natural turmeric (Curcuma longa Linn, Turmeric), is a type of polyphenol, which has long been used for curry spice, Chinese traditional herbal medicine, or in Japan, as food coloring for Japanese confectioneries. In the United States, curcumin is approved as safe by the Food and Drug Administration (FDA) [18]. Recent studies, which have been gaining global attention, have revealed that curcumin has different physiological activities in the body. Curcumin is known to have anti-oxidative and anti-inflammatory actions, anticancer action associated with cytostasis, induction of apoptosis, and anti-angiogenesis, anti-virus action, and cytoprotective action [19,20,21,22]. Furthermore, curcumin is known to have hypoglycemiclipidemic effects, affecting various transcription factors that control gene expression involved in glucose and fat metabolism [23,24,25], and curcumin intake is expected to possibly reduce different disorders caused by a high-fat diet (HFD). However, it is unclear whether curcumin has beneficial effects on arteriosclerotic disease which is increasing in ordinary people who are on HFD and aging.
The anti-oxidative enzyme HO-1 is one of the mechanisms that mediates various actions of curcumin [26,27]. It metabolizes heme and produces iron ions, carbon monoxide, and biliverdin. Biliverdin is immediately converted to bilirubin by reductase, and has recently been reported to affect endothelial nitric oxide synthase (eNOS) and Sit1 expression [28,29,30,31]. HO-1 is thus known to exert anti-oxidation, anti-inflammation, immunoregulation, and anti-aging actions by a variety of mechanisms. According to earlier studies with mice on the effects of curcumin on vascular damage caused by HFD, curcumin exerts anti-arteriosclerotic action by affecting the inhibition of cholesterol absorption, the macrophage scavenger receptor expression, Toll-like receptor 4 (TLR4) expression, and the renin-angiotensin system [23,32,33,34,35,36].
Against this background, focusing on HO-1, we studied the effects of long-term curcumin intake on vascular damage in 8- to 80-week-old wild-type mice that are on HFD and are aging.

Male C57BL/6J (CLEA, Tokyo, Japan) mice were used for this study. All animal experiments were conducted after obtaining consent from Toho University Animal Care and User Committee (15-51-285) and in accordance with Toho University Guidelines for Animal Experiments. Six-week-old mice were bred in a breeding room at a room temperature of 25 °C and in a 12-h light–dark cycle of 8:00 to 20:00. Mice drank tap water ad libitum and were fed with standard feed (MF; Oriental Yeast, Tokyo, Japan). Two weeks later, 8-week-old mice (n = 80) were divided into four groups (n = 20 for each group), and until 80 weeks old, mice in the MF group were fed with standard feed; mice in the HFD group were fed with HFD (32% safflower oil, 33.1% casein, 0.5% DL-methionine, 17.6% sucrose, 1.4% vitamin mixture, 9.8% mineral mixture, 5.6% cellulose powder) [37,38]; mice in the HFD + Cu group were fed with HFD + 0.1% curcumin; mice in the HFD + Cu + SnMP group were fed with HFD + 0.1% curcumin + SnMP. Eight-week-old mice were in a young control group (y-CTL group). SnMP (10 μmol/Kg) was injected intraperitoneally once a week, mice were weighed weekly, and food intake was measured once every 4 weeks.
Upon completion of the experiment, we measured the blood pressure of mice followed by 16 h of fasting, and subsequently, blood samples of mice were collected under chloral hydrate anesthesia while they were sacrificed. Then, collection of aortas and various evaluations were performed. Blood samples were stored as blood serum at −80 °C for analysis. Blood pressure was measured with the tail-cuff method using a noninvasive automated sphygmomanometer (softron BP-98A: Softron Co., Ltd., Tokyo, Japan).

We produced fresh frozen sections of thoracic aortas of mice that were 80 weeks old upon completion of the experiment and of mice in the y-CTL group (n = 9 for each group). The frozen segments were incubated with dihydroethidium (DHE: 10 μmol/L in PBS) (Sigma-Aldrich, St Louis, MO, USA) in a light-shielded humidifier chamber at 37 °C for 30 min. Superoxide was detected as red florescence using ethidium [39]. A He-Ne laser at 543 nm was used in combination with a long-pass filter at 560 nm for the detection of ethidium bromide.

Upon completion of the experiment, a 24-h collection of urine was performed using mouse metabolism cages (n = 9 for each group). The urine was centrifuged at 3000 rpm for 10 min, and subsequently supernatant was collected. Urinary 8-hydroxy-2′-deoxyguanosine (8-OHdG) was measured using an 8-OHdG ELISA kit (Japan Institute for the Control of Aging, Shizuoka, Japan) in accordance with the attached protocol [40].

After thoracic aortas were formalin-fixed and paraffin-embedded, the aortas were cut into 4 μM segments (n = 5 for each group). Immunohistochemical staining was performed after deparaffinization. For the primary antibody, anti-bilirubin antibody (Dojindo Laboratories, Kumamoto, Japan) was used, and for the secondary antibody and detection, a VECTOR M.O.M. Immunodetection Kit (Vector Laboratories, Inc., Burlingame, CA, USA) was used. Specimens were examined microscopically by light microscope (OLYMPUS BX50, Tokyo, Japan).

All data were listed as mean ± standard error (standard error of mean: SEM). Group comparisons were performed by one-way ANOVA, and a p-value of <0.05 was considered statistically significant.

Next, the anti-oxidative action of HO-1 was assessed, which had enhanced enzyme activity due to curcumin-mixed feed. Regional aortic oxidative stress was assessed with DHE staining of superoxide production in the vascular wall. As shown in Figure 3A, in the MF group, increased production of superoxide was noted in the vascular wall. This increase intensified more in the HFD group. However, in the HFD + Cu group, it was controlled to a level comparable to that of the y-CTL group. In the HFD + Cu + SnMP group, on the other hand, the curcumin-related inhibition effect on superoxide production disappeared. Systemic oxidative stress was evaluated with urinary 8OHdG concentration. Urinary 8OHdG in the MF group and HFD group significantly increased compared with that of the y-CTL group. This increased urinary 8OHdG in the HFD group, which was significantly higher compared with that of the MF group. There were no significant differences between the urinary 8OHdG in HFD + Cu group and the y-CTL group. However, the curcumin-related anti-oxidative effect had disappeared in the HFD + Cu + SnMP group (Figure 3B).

Curcumin is reported to have multifaceted benefits such as anti-cancer effects, anti-inflammatory action, and anti-oxidative action, and to have various physiological activities in vivo. This study revealed that curcumin suppresses vascular aging and inflammation, the causes of arteriosclerotic disease triggered by long-term administration of HFD. These results suggest that curcumin might be a food with a prophylactic function against arteriosclerotic disease. We believe that the potential of curcumin needs to be confirmed by clinical trials in the future.

We thank Kakuko Takano for her support in translating our manuscript. 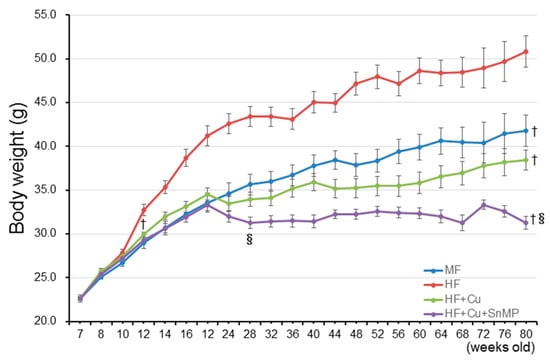 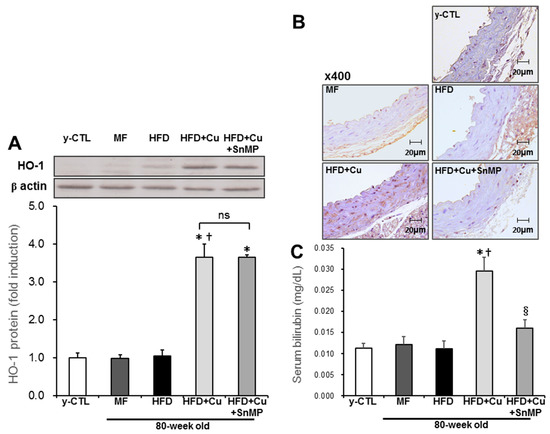 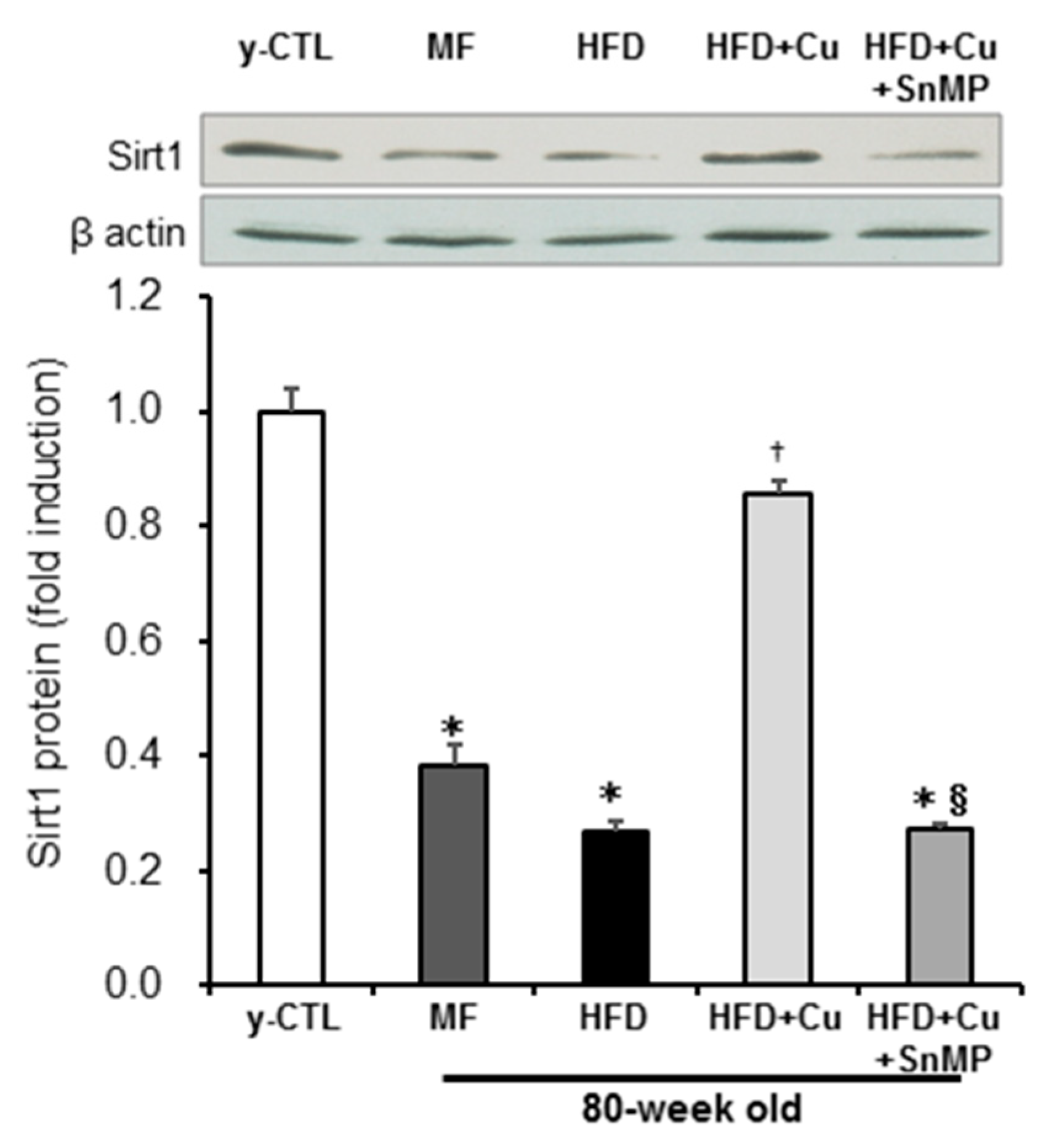