10,12 Conjugated Linoleic Acid-Driven Weight Loss Is Protective against Atherosclerosis in Mice and Is Associated with Alternative Macrophage Enrichment in Perivascular Adipose Tissue
Previous Article in Journal

Obesity is defined as excessive fat accumulation and can lead to metabolic complications, including dyslipidemia, adipokines dysregulation, insulin resistance (IR), inflammation, fibrosis, and steatohepatitis. White adipose tissue (WAT) is responsible for the storage of energy in the form of triacylglycerol, and thus protects other organs and tissues from ectopic fat accumulation resulting in lipotoxicity. WAT is also a critical endocrine organ capable of controlling the energy homeostasis and metabolism of several tissues through the secretion of several adipokines/cytokines such as leptin, adiponectin, and TNF-α that are known to mediate lipid metabolism, inflammation, and IR [1].
Obesity promotes not only adipocyte hypertrophy but also WAT macrophage accumulation, which can contribute to inflammation; this then triggers the production and deposition of extracellular matrix (ECM), including collagen, to induce adipose tissue fibrosis, possibly as a result of the pro-inflammatory adipokines/cytokines released by adipocytes and infiltrated macrophages [2]. In obesity, adipose tissue inflammation is further exacerbated by the excessive accumulation of ECM components resulting in the pathogenesis of fibrosis. Moreover, accumulating evidence indicates that some cathepsins act as a link between adipose tissue and fibrosis in obesity through proteolysis of ECM components [3,4,5,6,7]. However, the underlying mechanism by which the interactions of adipocyte hypertrophy, adipokine dysregulation, ECM accumulation, and inflammation lead to the development of adipose tissue fibrosis, IR, and hepatic steatosis has yet to be fully established, especially at the level of the transcriptional changes that occur in obese adipose tissue.
Luteolin (LU, 3′,4′,5,7-tetrahydroxyflavone) is a flavone found in leaves, vegetables, fruits, and natural herbal drugs such as parsley, thyme, peppermint, and celery. Some of the proven biological effects of LU are a variety of anti-inflammatory actions. However, little is known about the detailed mechanisms linked to the anti-metabolic syndrome action of luteolin based on the integration of transcriptional profile and phenotypic biomarkers. Accordingly, the aim of this study was to investigate the protective role of oral luteolin treatment on inflammation-mediated metabolic diseases in diet-induced obese C57BL/6J mice, focusing on its role in modulating the Toll-like receptor (TLR)-signaling-pathway-triggered up-regulation of pro-inflammatory cytokines. C57BL/6J is the most widely used inbred strain and is susceptible to diet-induced obesity, type 2 diabetes, and atherosclerosis. These results should provide novel insights into the effect of luteolin on the links among adiposopathy, IR, hepatic steatosis, and fibrosis.

Four-week-old male C57BL/6J mice were purchased from the Jackson Laboratory (Bar Harbor, ME, USA). The 36 mice were individually housed at room temperature (24 °C) and under a 12 h light/dark cycle, and were fed the AIN-76 semipurified diet for a one-week acclimation period after arrival. After acclimation, the mice were randomly divided into three groups consisting of normal diet (ND, n = 10), high-fat diet (HFD, n = 13), and HFD with 0.005% (w/w) luteolin (Sigma Chemicals, St. Louis, MO, USA) (LU, n = 13) for 16 weeks. The HFD is the AIN-76 semipurified diet containing 40 kcal% fat by calories: 15% (w/w) corn oil and 85% (w/w) lard of total fat. All experimental diets were prepared every week and stored in a dark room at −4 °C. Body weight and blood glucose levels were measured every 1 and 2 weeks, respectively. At the end of the experimental period, all mice were anesthetized with ether after a 12 h fast. Blood was taken from the inferior vena cava for the determination of glucose, plasma lipid, and hormone concentrations. The liver and adipose tissues were removed, rinsed with physiological saline, weighed, immediately frozen in liquid nitrogen, and stored at −70 °C until analysis. The study was performed under protocols approved by the Ethics Committee at Kyungpook National University (approval No. KNU 2010-4-14).

The plasma and hepatic FFA levels were both measured using an enzymatic assay kit (Wako Chemicals, Richmond, VA, USA), except that the hepatic FFA level was determined after extraction according to the methods of Folch [8].

Total RNA was extracted from adipose tissue using TRIZOL reagent (Invitrogen Life Technologies, Grand Island, NY, USA), and three pooled RNA sample sets were then constructed for the ND, HFD, and LU groups as previously described [16]. RNA was stored at −70 °C prior to further analysis by microarray and RT-qPCR.

All data are presented as mean ± standard error of the mean (SEM) and were analyzed using SPSS (SPSS Inc. Chicago, IL, USA). Statistical differences between groups (HFD and ND, and LU and HFD) were determined using Student’s t-test. Differences were considered statistically significant at p < 0.05.

Luteolin treatment significantly reduced the body weight gain and weights of WAT, including depots of epididymal, perirenal, retroperitoneal, mesenteric, subcutaneous, and interscapular WAT, compared with the HFD group. Luteolin also slightly decreased the liver weight, but there was no significant difference between the HFD and LU groups (Table 1). Plasma and hepatic FFA levels were meaningfully lowered by luteolin treatment compared with those of the HFD group.

3.2. Luteolin Reduced Macrophage Infiltration and Fibrosis by Modulating the Inflammatory Response and Activities of Hepatic Antioxidant Enzymes in DIO Mice

Luteolin treatment markedly decreased the plasma leptin and resistin levels and the leptin/adiponectin ratio, but significantly enhanced the plasma adiponectin level (Figure 1A). Furthermore, the levels of pro-inflammatory cytokines, including plasma TNF-α, MCP-1, IL-6, MIP-1β, PAI-1, and adipsin, and the macrophage low-grade inflammation marker sCD163 were significantly decreased by luteolin treatment compared with those in the HFD group (Figure 1B,C). The immunohistochemical staining revealed that CD68 and MCP-1 levels were lower in both the liver and adipose tissue of the LU group than in those of the HFD group (Figure 1D). The expression of macrophage infiltration-related genes (Cd68, Ccl2, Emr1, Csf14, and Saa3) in adipocytes was down-regulated by luteolin treatment (Figure 1E). Microarray validation with RT-qPCR showed a consistent pattern of changes in gene expression.
The levels of the hepatic lipotoxicity markers, including plasma GOT and GPT, and hepatic mitochondrial H2O2 and TBARS were markedly lower in the LU group than in the HFD group (Figure 2A). The activities of the hepatic antioxidant enzymes CAT and GPx were significantly higher in the LU group compared with those in the HFD group (Figure 2B). To assess tissue fibrosis, Masson’s trichrome staining was performed, which stains the fibrous tissues containing collagen blue in order to display the fibrous tissue of the liver and adipose tissue of HFD-fed mice. The liver of the HFD group was cirrhotic and the portal vein was surrounded by fibrous bands. In addition, the epididymal WAT depot of the HFD group exhibited very pronounced trichrome-positive “streaks” interspersed among the adipocytes. By contrast, the liver of the LU group had a normal architecture and fat pads, with densely packed and very thin collagen sheets surrounding the portal vein and each adipocyte (Figure 2C).

3.4. Luteolin Altered the Transcriptional Responses in the Epididymal WAT of DIO Mice 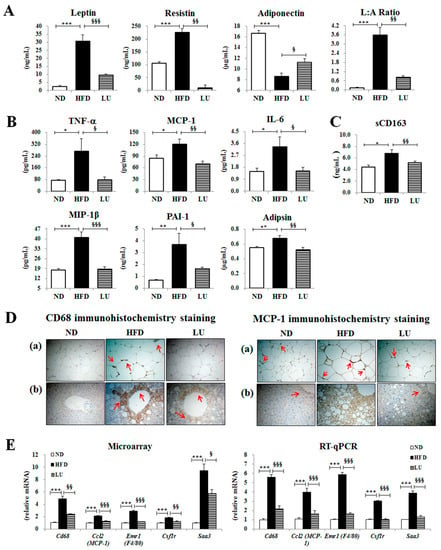 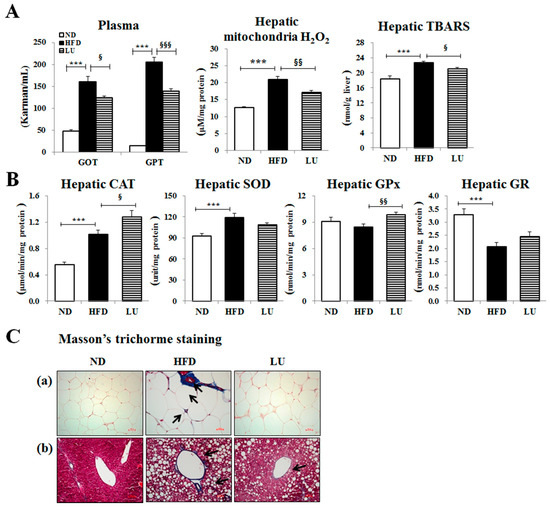 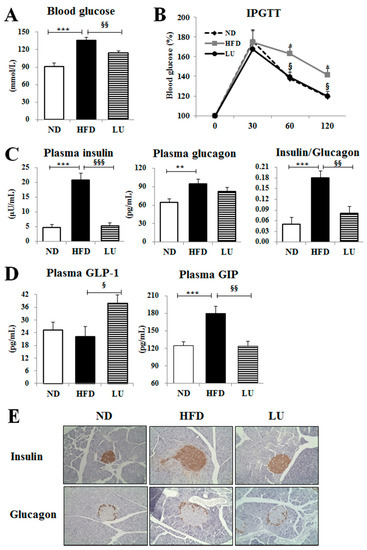 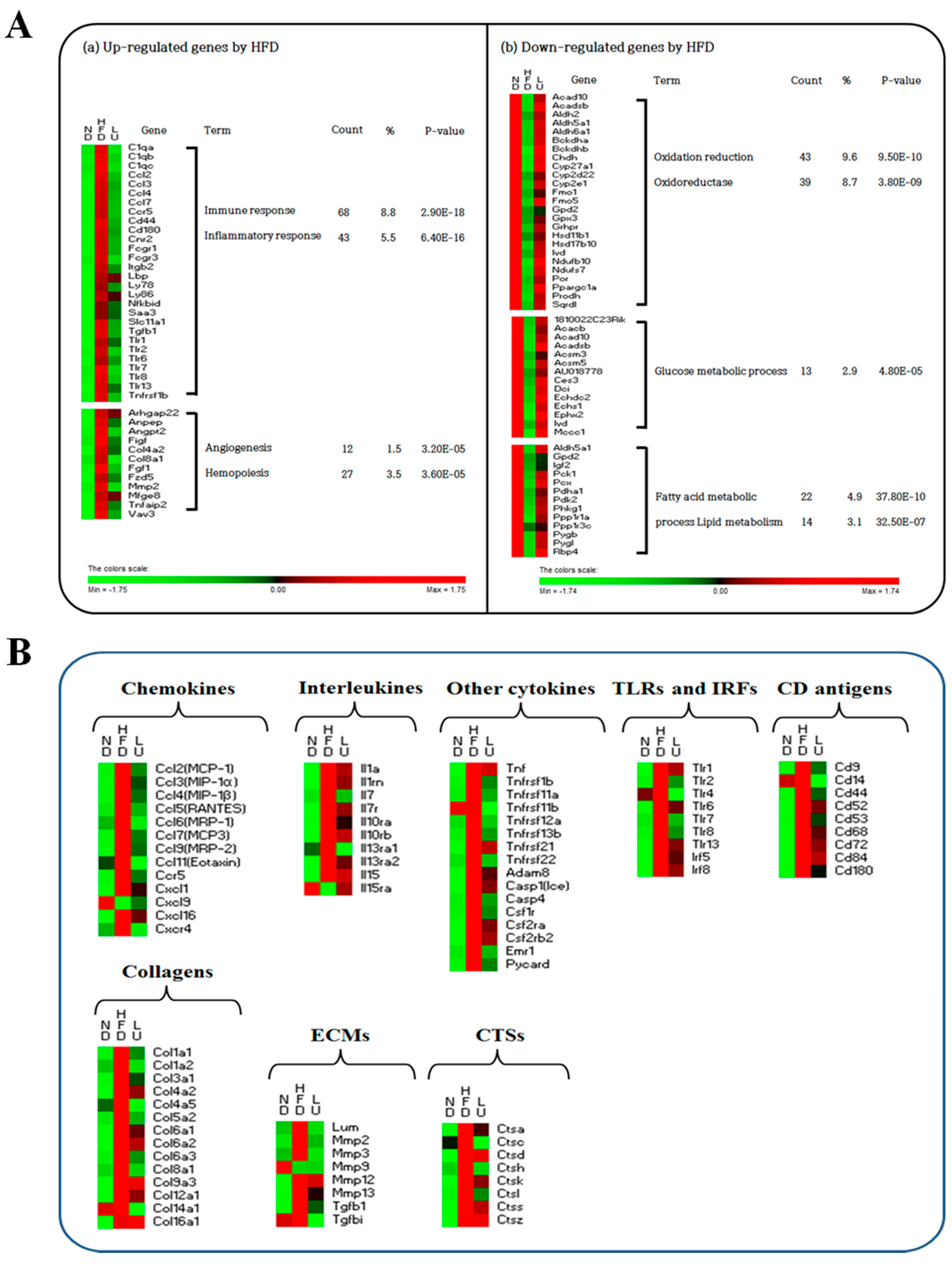 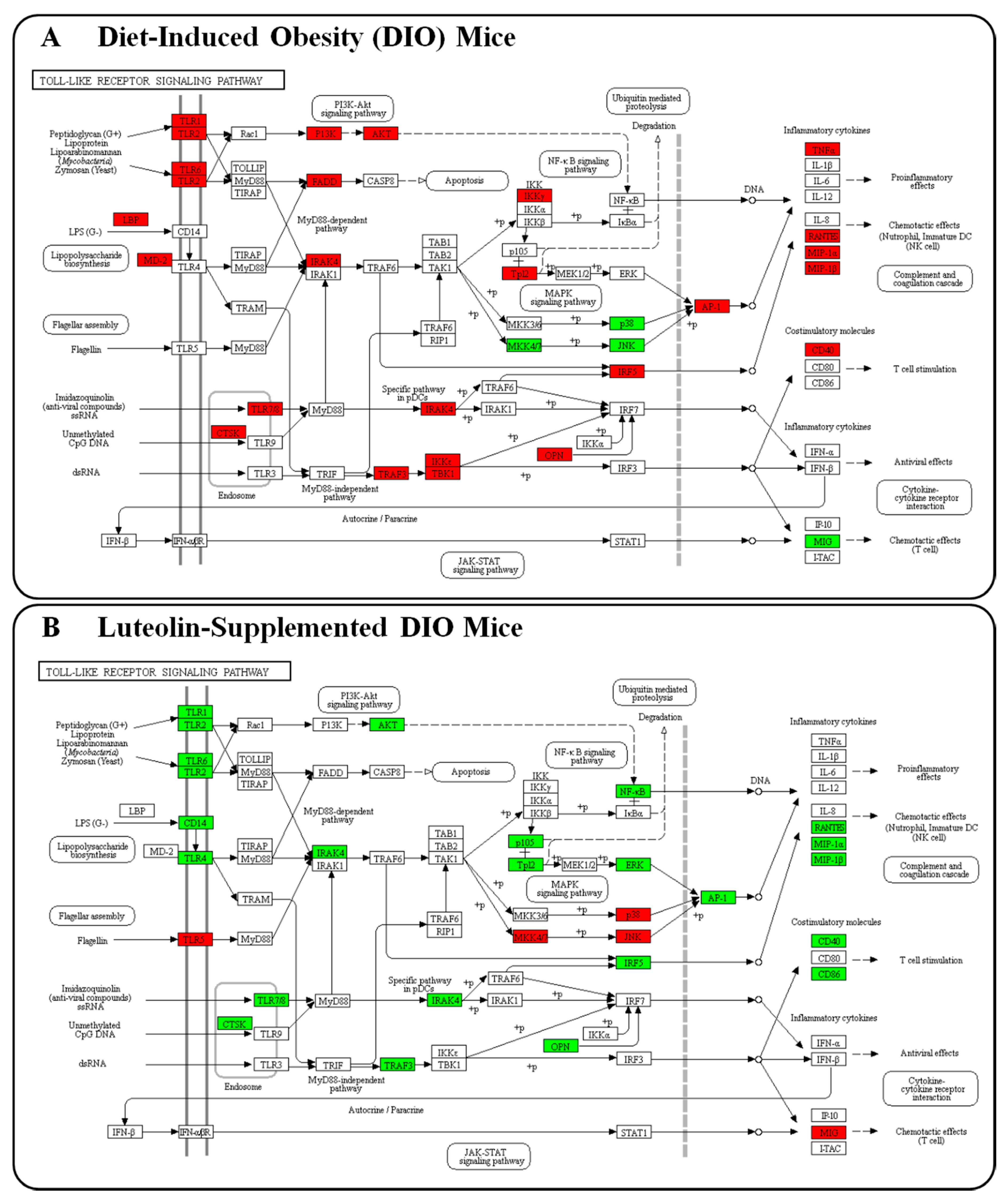 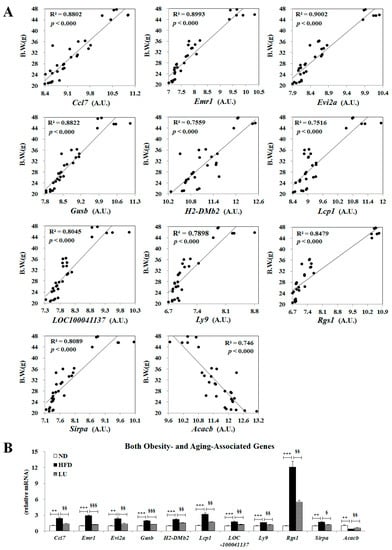 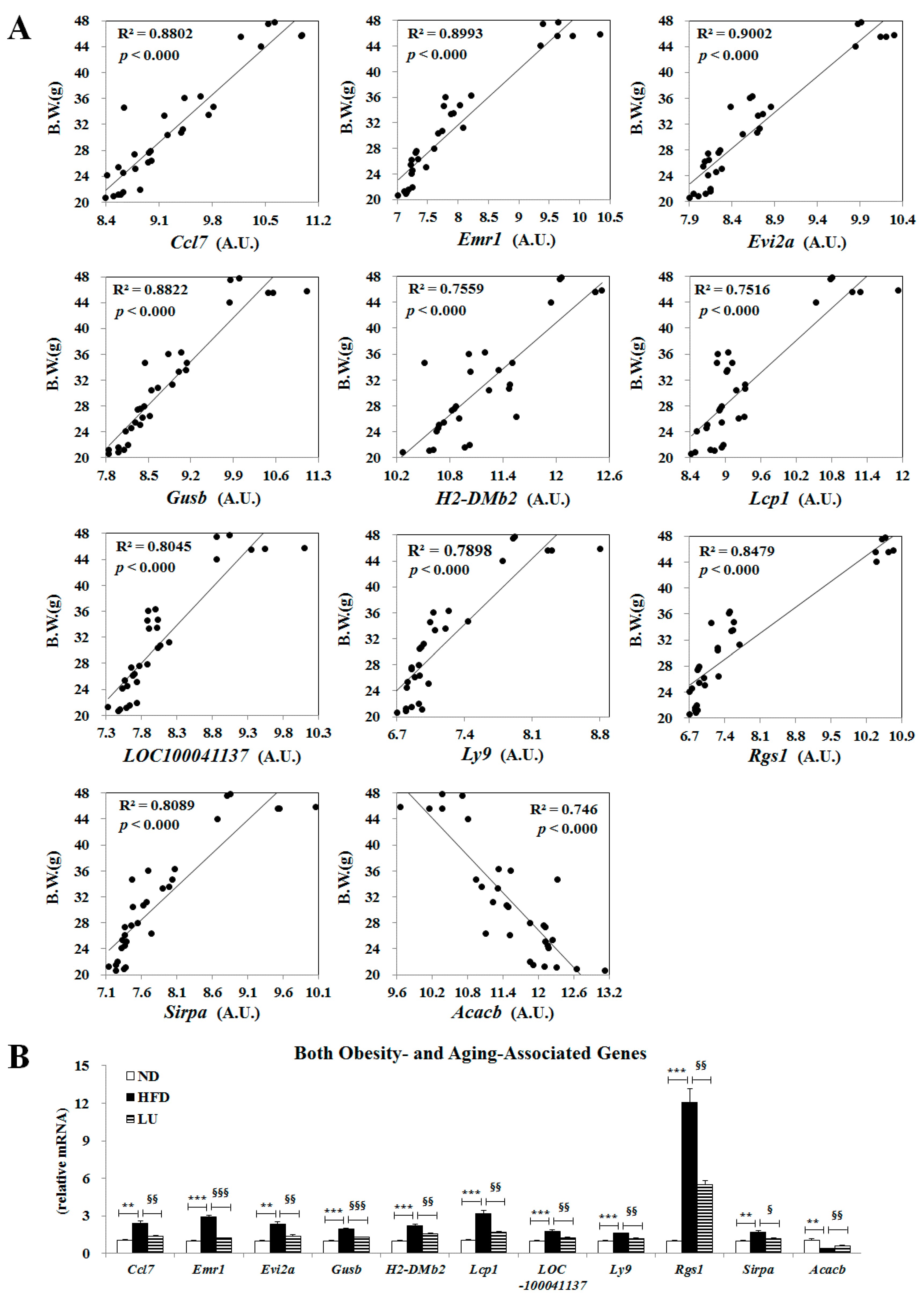 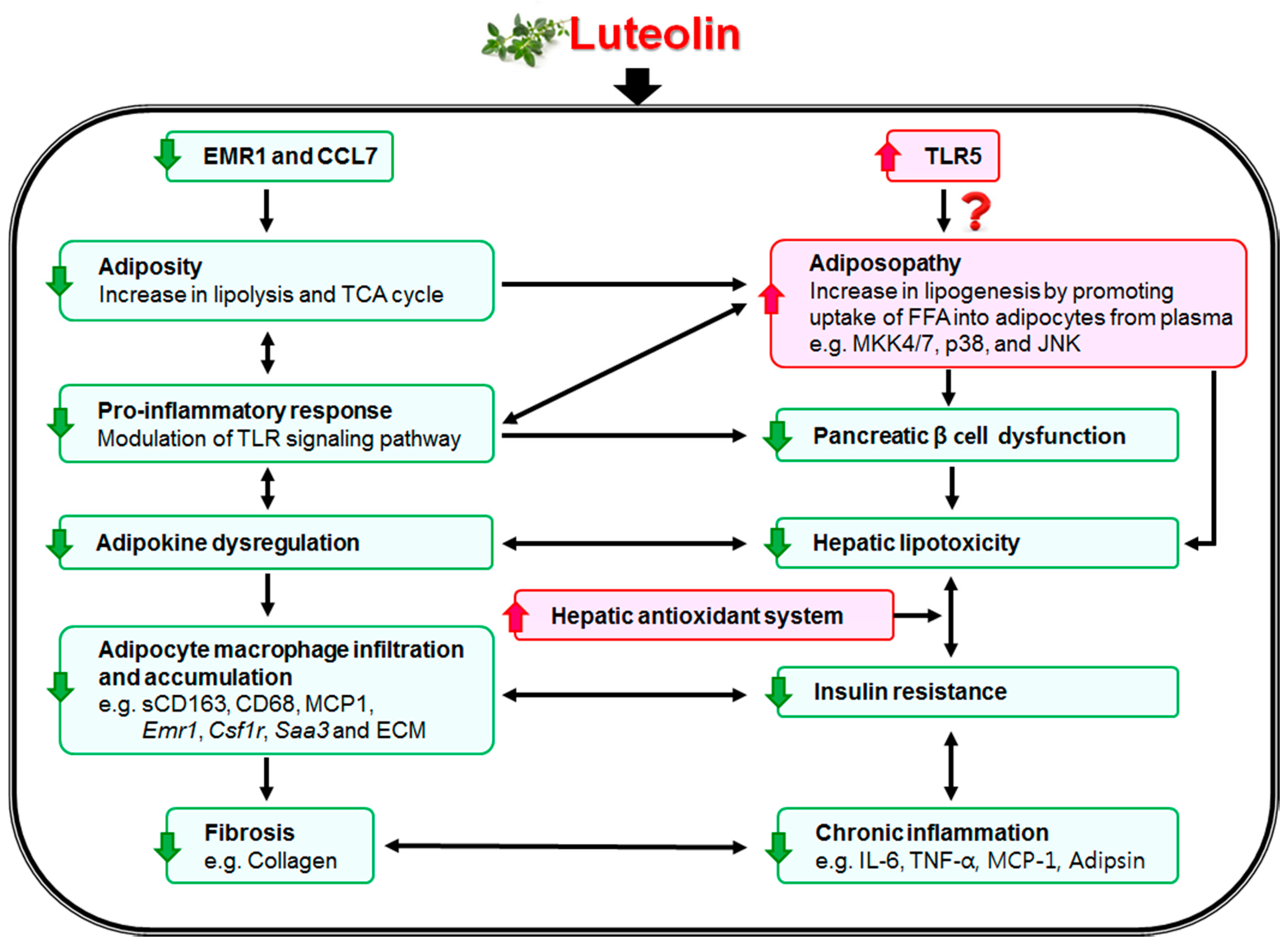