What is the Validity of Questionnaires Assessing Fruit and Vegetable Consumption in Children when Compared with Blood Biomarkers? A Meta-Analysis
Previous Article in Special Issue

Hot water was used to obtain Chlorella sorokiniana hot water extract (HWE). Subsequently, this byproduct was freeze-dried, hydrolysed at 50 °C using Protease N to obtain C. sorokiniana protein hydrolysates (PN-1), and then digested with a gastrointestinal enzyme (PN-1G). The inhibitory effects of the HWE and hydrolysates against angiotensin I-converting enzyme (ACE) were investigated. The soluble protein and peptide contents were 379.9 and 179.7 mg/g, respectively, for HWE and 574.8 and 332.8 mg/g, respectively, for PN-1. The IC50 values of the HWE, PN-1, and PN-1G on ACE were 1.070, 0.035, and 0.044 mg/mL, respectively. PN-1G was separated into seven fractions through size exclusion chromatography. The sixth fraction of the hydrolysate had a molecular weight between 270 and 340 Da, and the lowest IC50 value on ACE was 0.015 mg/mL. The amino acid sequences of the ACE-inhibitory peptides were Trp-Val, Val-Trp, Ile-Trp, and Leu-Trp, of which the IC50 values were 307.61, 0.58, 0.50, and 1.11 µΜ, respectively. Systolic blood pressure and diastolic blood pressure were reduced 20 and 21 mm Hg, respectively, in spontaneously hypertensive rats after 6 h of oral administration with a dose of 171.4 mg PN-1 powder/kg body weight. View Full-Text
Keywords: chlorella protein hydrolysate; angiotensin I-converting enzyme; spontaneously hypertensive rat; antihypertensive effect chlorella protein hydrolysate; angiotensin I-converting enzyme; spontaneously hypertensive rat; antihypertensive effect
►▼ Show Figures 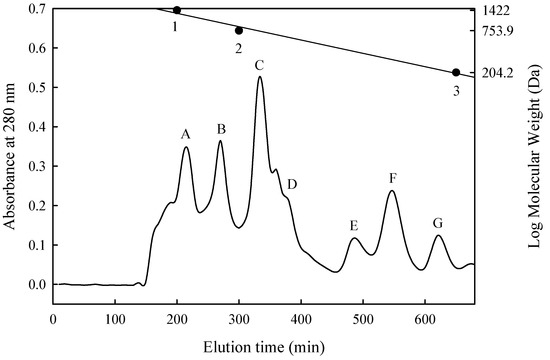