Acquiring reliable estimates of the Antarctic Ice Sheet surface mass balance is essential for trustworthy predictions of its evolution and future contribution to sea level rise. Snow height variations, i.e., the net change of the surface elevation resulting from a combination of surface processes such as snowfall, ablation, and wind redistribution, can provide a unique tool to constrain the uncertainty on mass budget estimations. In this study, GNSS Interferometric Reflectometry (GNSS-IR) is exploited to assess the long-term variations of snow accumulation and ablation processes. Eight antennas belonging to the Polar Earth Observing Network (POLENET) network are considered, together with the ROB1 antenna, deployed in the east part of Antarctica by the Royal Observatory of Belgium. For ROB1, which is located on an ice rise, we highlight an annual variation of snow accumulation in April–May (~30–50 cm) and ablation during spring/summer period. A snow surface elevation velocity of +0.08 ± 0.01 ma is observed in the 2013–2016 period, statistically rejecting the “no trend” null hypothesis. As the POLENET stations are all located on moving glaciers, their associated downhill motion must be corrected for using an elevation model. This induces an increased uncertainty on the snow surface elevation change determined from GNSS-IR. Among the eight stations analyzed, only three of them show a long-term snow height variation larger than the uncertainties. One is located on the Flask Galcier in the Antarctic Peninsula, with a decrease of more than 4 m between 2012 and 2014, with an uncertainty of 2.5 m. The second one is located on the Lower Thwaites Glacier where we observe, between 2010 and 2020, a snow surface drop of 10 m, with a conservative uncertainty of 1 m. The third station, located on the West Antarctic Ice Sheet (WAIS) divide, shows on the opposite an upward motion from 2005 to 2019, of 1.2 m with an uncertainty of 0.4 m. The snow surface change of the other POLENET stations analyzed is smaller than the uncertainty associated with the glacier slope. View Full-Text
Keywords: GNSS-IR; Antarctica; snow accumulation GNSS-IR; Antarctica; snow accumulation
►▼ Show Figures 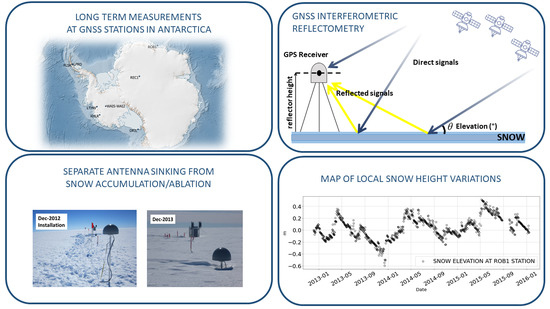