Mangrove forests growing at the poleward edges of their geographic distribution are occasionally subject to freezing (<0 °C) and cold wave (>0 °C) events. Cold wave effects on mangrove trees are well documented and adaptation to cold stress has been reported for local mangrove populations in the North Atlantic. However, there is less understanding of effects of cold waves on mangroves in the northern Pacific, especially at the regional scale. Moreover, it is unclear if cold tolerant mangrove species of North Asia display variation in resistance to cold temperatures across their geographic distribution. Using a cold wave event that occurred in January 2021, we evaluated the effects of low temperatures on vegetation index (VI) change (relative to a recent five-year baseline) for mangrove forests dominated by Kandelia obovata (Rhizophoraceae) and Avicennia marina (Acanthaceaee) at the northern edge of their geographical range. We used two VIs derived from Sentinel-2 imagery as indicators for canopy health: the normalized difference infrared index (NDII) and the chlorophyll red-edge index (ChlRE), which reflect forest canopy water content and chlorophyll concentration, respectively. We isolated the cold wave effects on the forest canopy from phenology (i.e., cold wave induced deviation from a five-year baseline) and used multiple linear regression to identify significant climatic predictors for the response of mangrove forest canopy VI change to low temperatures. For areas where the cold wave resulted in temperatures <10 °C, immediate decreases in both VIs were observed, and the VI difference relative to the baseline was generally greater at 30-days after the cold wave than when temperatures initially recovered to baseline values, showing a slight delay in VI response to cold wave-induced canopy damage. Furthermore, the two VIs did not respond consistently suggesting that cold-temperature induced changes in mangrove canopy chlorophyll and water content are affected independently or subject to differing physiological controls. Our results confirm that local baseline (i.e., recent past) climate predicts canopy resistance to cold wave damage across K. obovata stands in the northern Pacific, and in congruence with findings from New World mangroves, they imply geographic variation in mangrove leaf physiological resistance to cold for Northern Pacific mangroves. View Full-Text
Keywords: mangrove forests; cold event; disturbance; Kandelia obovata; normalized difference infrared index; chlorophyll red-edge index; Sentinel-2 mangrove forests; cold event; disturbance; Kandelia obovata; normalized difference infrared index; chlorophyll red-edge index; Sentinel-2
►▼ Show Figures 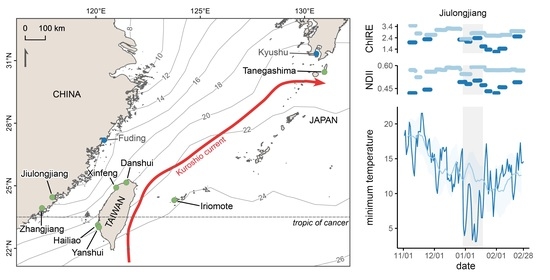