Developing an Atlas of Harmful Algal Blooms in the Red Sea: Linkages to Local Aquaculture

John A. Gittings
1 and

Harmful algal blooms (HABs) are one of the leading causes of biodiversity loss and alterations to ecosystem services. The Red Sea is one of the least studied large marine ecosystems (LMEs), and knowledge on the large-scale spatiotemporal distribution of HABs remains limited. We implemented the recently developed remote sensing algorithm of Gokul et al. (2019) to produce a high-resolution atlas of HAB events in the Red Sea and investigated their spatiotemporal variability between 2003 and 2017. The atlas revealed that (i) the southern part of the Red Sea is subject to a higher occurrence of HABs, as well as long-lasting and large-scale events, in comparison to the northern part of the basin, and (ii) the Red Sea HABs exhibited a notable seasonality, with most events occurring during summer. We further investigated the potential interactions between identified HAB events and the National Aquaculture Group (NAQUA), Al-Lith (Saudi Arabia)—the largest aquaculture facility on the Red Sea coast. The results suggest that the spatial coverage of HABs and the elevated chlorophyll-a concentration (Chl-a) (> 1 mg m−3; a proxy for high nutrient concentration), in the coastal waters of Al-Lith during summer, increased concurrently with the local aquaculture annual production over a nine-year period (2002–2010). This could be attributed to excessive nutrient loading from the NAQUA facility’s outfall, which enables the proliferation of HABs in an otherwise oligotrophic region during summer. Aquaculture is an expanding, high-value industry in the Kingdom of Saudi Arabia. Thus, a wastewater management plan should ideally be implemented at a national level, in order to prevent excessive nutrient loading. Our results may assist policy-makers’ efforts to ensure the sustainable development of the Red Sea’s coastal economic zone. View Full-Text
Keywords: harmful algal blooms; Red Sea; remote sensing; aquaculture harmful algal blooms; Red Sea; remote sensing; aquaculture
►▼ Show Figures 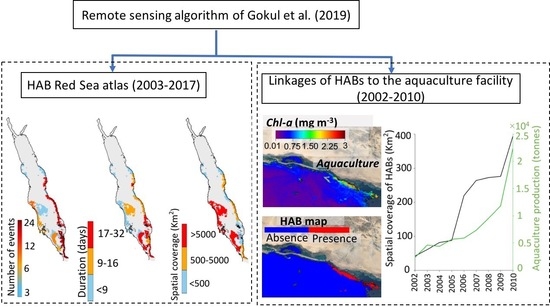